The Poitou-Charentes region of western France is one of the sunniest regions in the country and very popular with visitors. Among the highlights on the coast are the island of Ile-de-Ré and the fascinating historical town of La Rochelle, while inland you can discover the fields of sunflowers and quiet villages for which the region is known. 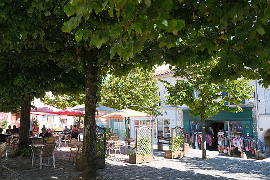 The Poitou-Charentes region is on the western coast of France where it faces the Atlantic Ocean and the Bay of Biscay. The coastal region of Poitou-Charentes around Ile-de-Ré has a microclimate that is said to be the second sunniest region of mainland France (after Provence).

To help you plan your visit we mention the main highlights for each department below, then you can see lots more places to visit and attractions in the travel guides for the individual departments

The coastal Charente-Maritime department is a very popular destination with both French and overseas visitors, attracted in particular by the popular island of Ile-de-Ré and the historic port town of La Rochelle.

One of our favourite French coastal towns, La Rochelle has an extensive historic centre and a port area that is very active late into the evening - a visit is highly recommended!

Just off the coast of Charente-Maritime and reached by a bridge, the island of Ile de Ré is also very popular with summer visitors, attracted by the beaches and the family atmosphere. The classified 'beautiful villages' of Ars-en-Ré and La Flotte-en-Ré and the town of St-Martin-de-Ré are among the highlights on the island.

Other islands off the coast include Ile d'Oleron and the small island of Ile d'Aix, the fortified island where Napoleon once stayed.

Continuing south along the coast of Charente-Maritime places of interest include Rochefort, a 17th century grand new town around an important naval base; Royan, a popular seaside resort and 4* ville fleurie; the seaside resort and popular zoo at La Palmyre.; and the fortified town of Brouage.

Reaching the Gironde estuary at the southern border of Charente-Maritime, at Meschers-sur-Gironde you will find beaches and troglodyte caves in the cliffs along the coast, and Talmont-sur-Gironde is a pretty village close by.

Away from the coast the department is much quieter. Not far from La Rochelle the towns of Marans and Surgeres have some interesting features to explore, and close to here you can explore the marshes of the Marais Poitevin region.

Further south, the town of Saintes has several historic sites of interest and is classified as a 'town of art and history'.

The Charente River can also be explored as it passes through miles of rolling countryside between Angouleme and Rochefort, and is popular with visitors wanting to see the landscapes of the region.

See the Charente-Maritime travel guide for more highlights and attractions

The Charente department in the southern Poitou-Charentes region is a quiet department, ideal for those seeking to escape the crowds and spend time exploring this largely unspoiled rural area.

There are some notable highlights to be explored in the department, above all the town of Angouleme which has an attractive centre that is pleasant to explore. To the north-east of Angouleme, Confolens also has some interesting monuments. One of our favourite villages in the area is Verteuil-sur-Charente.

Perhaps the most famous town in Charente is Cognac, where you can learn everything related to this popular liqueur - and have plenty of opportunities to try and buy a few bottles of Cognac to take home with you...

We must also mention the village of Aubeterre-sur-Dronne, close to the border with the Dordogne department and one of the prettiest villages in the Poitou-Charentes region, where you can also see an unusual troglodyte church.

See the Charente travel guide for more highlights and attractions

The Vienne department is inland and to the north-east of the Poitou-Charentes region. It is in Vienne that you will find the region capital, Poitiers, one of the most attractive towns in the region and with a historic centre, attractive boulevards and street-side cafes to explore.

Poitiers is also well known because of the theme park at Futuroscope, one of the most popular in France and always great fun with action rides, giant screen films, dancing robots...

Other towns and villages of interest in Vienne include the medieval market town of Chauvigny which has three castles and is officially listed as a 'recommended detour' town.

The village of Angles-sur-l'Anglin to the east of Poitiers is in a riverside setting and overlooked by a castle, and certainly one of our favourite villages in the Poitou-Charentes region. You can also visit the small town of Moncontour to the north-east of the department

There are also some important historic monuments in Vienne. A particular highlight is the abbey at Saint-Savin-sur-Gartempe, an impressive roman style abbey from the 11th century that is now a UNESCO listed world heritage site. You can also visit the abbey in the quiet village of Nouaille-Maupertuis.

See the Vienne travel guide for more highlights and attractions

To the north-east of Poitou-Charentes, the Deux-Sevres department is best known for the Marais-Poitevin region which is partly situated in this department around Coulon.

The Marais-Poitevin is a large region of canals and marshes, best explored on a boat hired from one of the towns here.

Elsewhere in Deux-Sevres, the most important town in the department is Niort while the town of Melle is a lively town best known for its ensemble of churches. Close to Niort you can also visit the 15th century Chateau de Cherveux.

Moving north through the department you can visit the medieval centre of Parthenay with its castle ruins and picturesque setting on the banks of the Thouet river.

Towards the north of the Deux-Sevres you can also explore the town of Thouars, to the south-east of Saumur and overlooked by its 17th century castle.

Map of Poitou-Charentes and places nearby