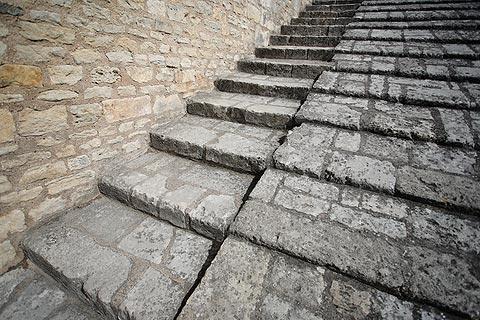 The town of Brouage (commune name Hiers-Brouage) is on the edge of the marshes of the Marais-Poitevin near the west coast of France, in the Charente-Maritime department near Ile d'Oléron and south-west of Rochefort.

Historically an important regional centre with a wealth based around the salt industry, Brouage was the first important salt-trading town in France, and also the leading port for the salt trade - a trade employing thousands of people.

However, the town had started to lose trade to neighbouring Rochefort by the 17th century, a decline in fortunes that came about because the port became less accessible to ships due to the receding waters, and also because during the Wars of Religion the port became blocked by sunken ships (sunk intentionally by the protestants to prevent the catholics trading).

It was at this time that Richelieu had the town fortified as an arsenal - the fortifications were built in the middle of the 17th century, and in style they are very similar to those that vauban would use to great effect a century later.

A long period of decline followed for the town, which only changed with the advent of tourism in the late 20th century. The ramparts and associated buildings were renovated and it is these that now attract most visitors to Brouage - the town, fortifications and surrounding salt marshes are now one of only about 30 sites in France to be officially classified as a 'Grand site of France' (as one of the Vauban fortifications).

There are several sites of interest and importance to see in Brouage.

The main highlight of a visit to Brouage is the military citadel and the associated ring of fortifications, including one of the substantial doorways that pass through the ramparts called the Royal Doorway (porte royale). The other original entrance is no longer visible.

It is possible to walk along the top of the ramparts, a walk of approximately two kilometres. As you walk, consider what a feat it was to build the citadel in the soft marshes, which involved first building a great platform of oak posts, and then laying a thick layer of stone on top, all held together with ironwork.

The Halle aux Vivres in Brouage is also interesting to see. At one time it was a very large storage hall for the army, holding produce such as salted meat and wine. It is now used as an exhibition centre with many interesting items relating to the military history of Europe. Several other military buildings dating from the 17th century can also be seen, such as shops, forges and gunpowder storage buildings.

Leaving military buildings behind, next visit the 17th century Church of Saint-Pierre. You will notice that the entrance seems to be a different style than the remainder of the church - the original entrance was replaced in the 18th century following damage, by which time the more ornate 'classical style' was in fashion.

You can also see a reconstruction of an ice house within the town fortifications - the thick ramparts allowed ice to be kept frozen for a very long period, so it could be available for the hospital.

Before leaving Brouage be sure to stroll around the town itself, where there are a few artisan shops and cafes, and to explore the salt marshes a little - they are highly regarded both as an unusual environment, and as a nature reserve that attracts many thousands of birds, including storks (these are even sometimes seen on the citadel fortifications).

The principal tourist attractions close to Brouage include the chance to tour the Ile d'Oléron and also to visit the highly regarded zoo at La Tremblade.

Map of Brouage and places nearby

Visit near Brouage with France This Way reviews

Plan your visit to Brouage, Charente-Maritime

The French version of this page is at Brouage (Francais)