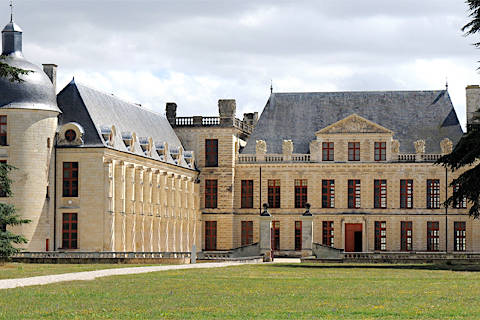 Moncontour village is a gem hidden amongst a sea of sunflowers and melon fields. A pretty, historical village on the border of Vienne and Deux Sevres - said to be the second sunniest area in France - Moncontour offers nature, culture, history and all the activities you could wish for.

Watched over protectively by it’s 11th century donjon, Moncontour has a water sports lake and is surrounded by branches of the River Dive and beautiful forest and riverside walks. 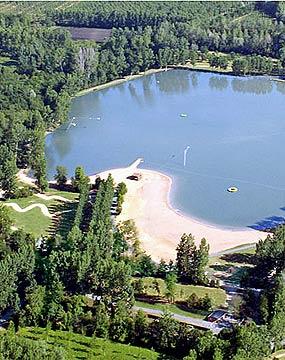 The area is a nature lovers paradise - you can find deer, birds of prey and even a wild boar or two. If you bring a fishing rod, make sure it’s heavy duty and that you have chain mail for your arms – the fish are BIG! Arrive in spring and the swallows will lead you to your destination. Or you may be lucky enough to spot a heron or two along your route, usually stealing a fish or two from the fishermen

The grounds of the donjon, the village park and surrounding area play host to a number of events during the summer, including the largest Vide Grenier / Brocante in the region on 1st May each year; Le Dives Buissonieres – music and crafts middle of June each year (13 June 2009); the Fete de la Musique which occurs all over France on June 20th each year; and the July 14th celebrations when you can watch the fireworks being set off from the donjon – just to name a few.

The donjon and the battle of Moncontour

The dungeon structure is the result of four phases of work between the 11th and 14th century. The original structure of the tower was held under the direction of the Duke of Anjou, Fulk III, in the 11th century and was built of limestone. It was built on the top of a hill surrounded by impassable marshes that provided an unobstructed view.

In the 12th century the English tower was seized and modified by the lords. After a demolition of the upper part, it took on the appearance of an apartment building. The stairs have been added to connect the floors, chimneys and new windows added. Finally, in the 14th century during the Hundred Years War, the tower was strengthened to provide greater defense and it now supports a solid roof from which you can get a superb view of the local countryside.

The towe is now the only remnant of a magnificent building. The other architectural parts of the old fortified site have all seen better days. The elevated tower on the hill is protected by an enclosure of high walls and accessible by a vaulted entrance. Nearby there are the ruins of the old church of Notre Dame which was built in the castle walls. A walk in front of the castle offers breathtaking views of the surrounding countryside. 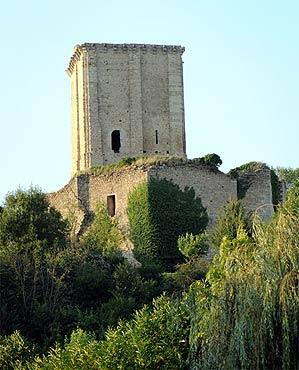 The donjon saw many battles. In 1201 and again in 1206 it had belonged to John Lackland – later King of England. In the late 13th century the donjon evidenced war again during the Hundred Years War between England and France. Duguesclin swearing in 1372 ‘I will never sleep in a bed before I have taken Moncontour and hanged the Englishman who insulted me… and made eternal the famous dungeon of Moncontour.

In 1569 the donjon was witness once more to combat, this time between the Protestants and the Catholics. In the middle of the sixteenth century, Protestants and Catholics were engaged in unprecedented violence leading to murder conspiracy, heinous killings, looting, lynching, burnings and a massacre on the plateau of Moncontour.

Under Admiral de Coligny, leader of the Huguenots and the Duke of Anjou, head of the Catholics, the castle was powerless to stop one of the bloodiest battles in the history of France. The phenomenal size of the troops were fantastic:

- Protestant troops: With 25,000 men including 7,000 knights and 15,000 infantry (including a majority of Germans) and 8 pieces of artillery, the Huguenots relied on the experience of a great leader, Admiral Gaspard de Coligny, then aged 53.

- Catholics : With 30,000 troops, including 17,000 footmen (many Swiss) also counting on an artillery of 15 pieces of cannon. The young Duke of Anjou, who was commanding the royal troops, was supported by a great military strategist, Lord Tavannes (Gaspard de Saulx)…

...And all these within the small, sleepy village of Moncontour.

The Battle: Monday 3 October 1569 the two armies collide. In total it was suggested some 20,000 were later dead on the plains and were placed on a great pyre. The glowing lights of the gigantic fire could be seen around the countryside for several miles. Coligny injured departed for La Rochelle, the Duke of Anjou quickly announced the good news to his brother King Charles IX and their mother Catherine de Medici.

The former chapel of the chateau-donjon is a masterpiece of Romanesque art, the church of Notre-Dame of the Chateau. Some restoration has taken place recently to repair damage and restore some of its glory. It still houses fragments of wall paintings and carvings in limestone.

There are a number of houses in Moncontour who own this kind of stone ball. It is a ball from a catapult, the sort used between the XI and the XIV century during the great wars which took place around the village. Come take a meander around the rivers edge, peak inside the gardens of the houses which front the river, see if you can spot a ball or two… (this one can be found in the rear garden of Le Grand Saule Chambre d’Hote ) 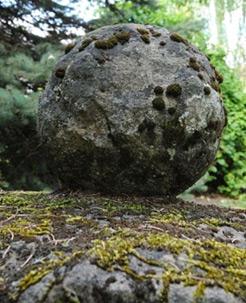 The surrounding region is steeped in Roman art and architecture and chateaux. Roman sites of Sanxay, Naintre and Gens all within an hours drive. The route des Roi Anglais meanders from the coast down to the Loire Valley. You will find it hard to enter a village or town and not find a chateau or two, the nearest and most beautiful being that of Chateau Oiron, which holds regular events during the summer time.

The area around Moncontour is central for walking, cycling, horse riding, golf, history, architecture and culture. One of the largest golf courses in the country is just 20 minutes away near Loudun and the famous Golf de Forges just 40 minutes in the other direction between Poitiers and Parthenay. The area is mid point between the northern channel ports and the south of France.

The beautiful Romanesque church of St Jouin des Marnes can be found just ten minutes drive. And not forgetting once more the town of Oiron where the church actually contains a stuffed crocodile thought to have mystical powers! Visit also Saint-Loup-Lamaire which has a very beautiful chateau, cobbled streets, an English coffee / tea shop run by a French lady, and a beautiful river with small waterfall.

If you are looking for visits to suit the children then you can not go wrong with the Vallee des Singes (ape valley) at Romagne; and Le Geants du Ciel (birds of prey) at Chauvigny, where you will also find a castle and medieval town. Troglodyte caves at Rochemenier and Doue la Fontaine; and we must not forget Poitiers famous theme park Futuroscope which is just 45 minutes drive.

Within an hours drive you can find Saumur, Chinon and Tours along the Loire Valley and also the beautiful chateaux of Amboise, Villandry and Usse are all well worth a visit. At Amboise you can find the tomb of Leonardo da Vinci.

Map of Moncontour, Vienne and places nearby

Visit near Moncontour, Vienne with France This Way reviews

The French version of this page is at Moncontour, Vienne (Francais)