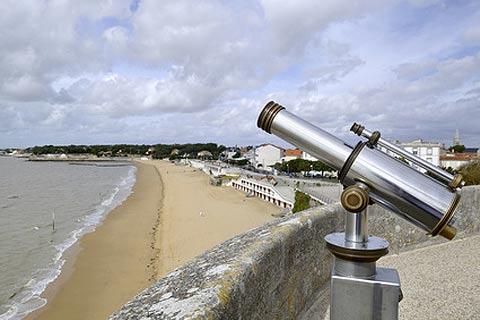 The sunny town of Fouras is one of our favourites along the Charente-Maritime coast, combining a 'real' French town with a modern resort, and beaches with history. It is situated on a small peninsula to the north-west of Rochefort.

Note: although it is commonly referred to as Fouras, the full name of the resort is actually Fouras-les-Bains, a reminder that the town was established more than 150 years ago as a popular thermal treatment centre and one of the first seaside resorts in France.

The beaches in Fouras are the main attraction for visitors, and there are three important beaches to choose between.

If you are visiting with children you will want to stay on the main beach called 'Grande Plage', which has the most facilities and is supervised in summer, or pass to the other side of the fort to Plage Sud which is quieter. Quite unusually for beaches in Charente-Maritime the Grande Plage is also accessible during low tide.

The third beach, towards the north of the peninsula, is called Plage Nord and is a bit more exposed to the elements an attracts the windsurfing community.

Although it is principally the beaches that attract visitors to Fouras, be sure to allow time to explore some of the other local attractions in and around the town.

In the centre of Fouras itself you will find (in season at least) a lively atmosphere based around the wide selection of cafes and shops in the town centre. There are also some attractive belle epoque era villas to admire dating from the early years of the town, in particular along the Plage Nord, although not surprisingly they are rather outnumbered by more recent houses.

To increase your choice of restaurants go west along the narrow peninsula called the Pointe de Fumée where you will find several more choices, especially seafood restaurants.

The very substantial fortress at one end of the beach in Fouras is called Fort Vauban or Fort de Fouras - a castle has stood here since the 11th century, although the present imposing fortress except for the medieval tower dates from the 17th century when Vauban organised sea defences along the coast against a potential attack by the English.

Inside the fort you can visit the Town Museum, with numerous artefacts relating the history of Fouras and an eclectic collection of items from around the world, and it is also possible to go up to the top off the main tower for a view across the town, sea and beach.

Fort Boyard is a fort just off the coast that is very well known to French visitors, being the center of a television 'adventure programme' of the same name. You can take a boat trip out to see close-up the massive fortifications of this 17th century fortress.

Most visits will include a trip to the Ile d'Aix, reached by ferry from the Fouras peninsula and a very pleasant small island to explore by bike while visiting the forts on the island.

Map of Fouras and places nearby

Visit near Fouras with France This Way reviews

Plan your visit to Fouras, Charente-Maritime

Regular market(s) are held in Fouras each Tuesday & Friday. (Markets are held in the morning unless stated.)

The French version of this page is at Fouras (Francais)