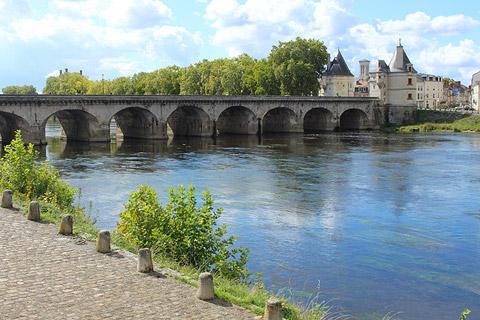 The market town of Châtellerault is in the centre of the Vienne department of Poitou-Charentes, to the north-east of Poitiers, and is very much a typical town of the region.

France This Way comment: while Chatellerault is a pleasant town with a few monuments, it is a town to visit if you are passing rather than an important tourist destination.

Start your visit to Chatellerault in the main square in the town centre. There is plenty of parking here, and around the edges of the square there are cafes and shops as well as the town hall and the theatre Blossac. In the centre of the square you can see a large fountain and a bandstand.

In the pedestrianised streets to the west of here you can find more shops and cafes, and to the south there is a small park with a substantial monument to the "Glory of the Revolution".

At the northern end of the square you can see the 15th century Church of Saint-John the Baptist, substantially rebuilt in the 19th century although retaining traces of the original. Inside the church are some interesting stone altars.

The older part of Châtellerault has several buildings of interest, including several rather grand townhouses in the Renaissance and classical styles. 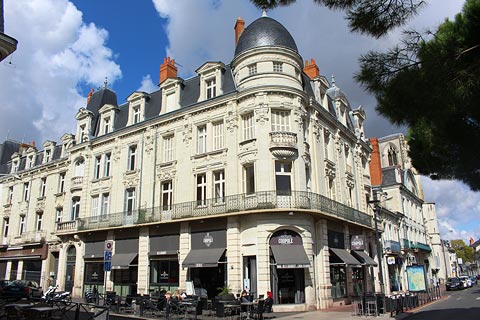 The most interesting of these is the Maison Descartes, once the home to the grandparents of the famous philospher René Descartes ("I think therefore I am") who went to school in the college opposite the house. Maison Descartes is on Rue Bourbon near Chatellerault tourist office, not in Rue René Descartes where we spend a long time looking for it, and has a renaissance style facade.

The Church of Saint-Jacques is the most important church in Chatellerault. This church dates from the 11th century, although much of what we see today is a result of a major rebuilding and renovation project in the middle of the 19th century. Inside the church there is a wooden medieval painted statue of Saint-Jacques.

The church has a grand facade and two square towers which I though was very lovely although Prosper Mérimee, the Inspector of Historic Monuments at the time of the modifications, refused to award a grant for the works because they were so out of character and lacking authenticity.

Among the other historic townhouses is the Hotel Sully, on the road in front of the Church of Saint-Jacques (perhaps the most attractive street in Chatellerault). The Hotel Sully dates from the 17th century and held the Museum of Châtellerault for more than 100 years.

Other important townhouses in Chatellerault include the Hotel des Sibylles and the Hotel Nicolas Alamant.

The port on the Vienne river can still be seen, and has been used for hundreds of years. The stone arched bridge across the Vienne river, the Pont Henri-IV, dates from the beginning of the 17th century, as do the substantial round towers that stand at one end of the bridge. These towers are not defensive but were built as a toll station and to prevent disease from entering the town.

Enthusiasts of modern architecture will be interested to know that the other bridge across the river in the town centre, the Pont Camille-de-Hogues, was the first bridge in France to be built using reinforced concrete and dates from 1899. Despite its historic importance, you might think it looks just like any other modern bridge: remember that it was unique at the time it was built! The bridge is now classified as a Historic Monument. 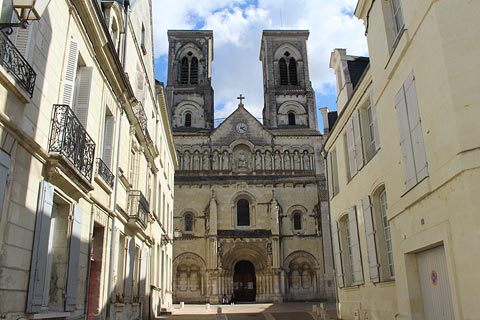 In a converted weapons factory at Châtellerault on the west side of the Vienne river you can visit the Museum of the Motorbike, the Car and the Bike (le musée auto, moto, vélo). The museum has a very interesting and electic mix of motorbikes, bicycles and cars from the last 130 years, in particular from the period around the 1930's but also including very recent examples.

There are several unusual and unique exhibits and we suggest you visit if you are interested in old cars and bikes. The museum building itself in stone and with two red-brick towers, is an interesting example of 'factory building' that dates from the first half of the 19th century.

Enthusiasts of rural churches will want to visit several of the small villages around Châtellerault such as Saint-Sauveur, Senillé, Thuré, Colombiers and Bonneuil-Matours for some of the best examples of village churches. Ask in the Châtellerault tourist office if they can tell you opening hours of these churches or you are likely to find many of them closed when you arrive!

Another local historic highlight is the ruins of the Roman theatre at Naintré (called the Theatre of Old Poitiers but not to be confused with the town of Poitiers further to the west).

Map of Chatellerault and places nearby

Visit near Chatellerault with France This Way reviews

Plan your visit to Chatellerault, Vienne

Regular market(s) are held in Chatellerault each Wednesday & Thursday all day & Saturday. (Markets are held in the morning unless stated.)

The French version of this page is at Chatellerault (Francais)