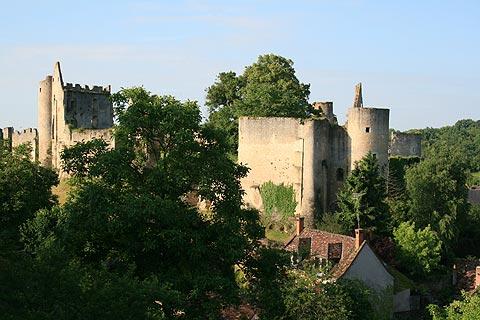 Vienne has a famous abbey at St-Savin-sur-Gartempe, the historical town of Poitiers, the pretty village of Angles sur l'Anglin and various other attractions to explore - but it is for something much more modern that most visitors discover the Vienne department: the very popular theme park at Futuroscope, one of the most visited in France!

Vienne is a department in central-western France to the north-east of the Poitou-Charentes region that includes the town of Poitiers and the popular futuroscope theme park and several interesting towns and villages.

In the heart of the Vienne, the first stop for many visitors is the town of Poitiers, the largest town in the department and capital of the Poitou-Charentes region. The town has many buildings of historical interest and a lively centre.

Close to Poitiers, and one of the most popular attractions in France, is the theme park at Futuroscope.

Outside of Poitiers the Vienne department has numerous other attractions, with towns and villages, and many local museums and places of interest to see during your visit:

While in this region we also suggest you visit the abbey at Nouaille-Maupertuis (south-east of Poitiers).

Travelling east from Poitiers, perhaps with a deviation to see the picturesque village of Morthermer with its fortress and church, you can discover the medieval city at Chauvigny, then continue eastwards to see the impressive Saint-Savin Abbey (world heritage site).

Another highlight in the eastern Vienne is the pretty village at Angles sur l'Anglin (north of Saint-Savin), with the curious prehistoric rock carvings at the 'Witches Rock' to see nearby.

The village of La Roche-Posay, a little way north of Angles sur l'Anglin, is well known for its healing spa waters and also has a pleasant medieval centre to explore including an 11th century donjon, all that remains of the medieval castle that once stood here.

North-east of Poitiers, Chatellerault is known as being 'Descartes town' (after the philosopher) with highlights including the Church of Saint-Jacques and the 17th century bridge. Close by at Naintré you can visit the ruins of a Roman theatre.

In the north-west of the department you can visit Loudun, with its old town centred around the 'square tower', and also Moncontour which is a small town with a fascinating history (and take a trip to nearby Chateau Oiron).

Among the most notable villages in this area, Curcay-sur-Dive and Ranton both have interesting medieval fortresses, and Mirabeau (a little way south towards Poitiers) is also a pleasant village to explore.

The area of the Vienne to the south-west of Poitiers has several interesting and scenic villages that you will discover as you explore - typically small and not taking long to explore, but each with its own particular appeal.

Among our own favourites for a quiet stroll are Vivonne with the 13th century Church of Saint-Georges, Lusignan, Jazeneuil with its romanesque church next to the river, and the village of Ligugé.

You can also see the Gallo-Roman site at Sanxay to the south-west of Poitiers, which is a listed National Monument with the ruins of a Roman theatre and baths (Sanxay itself is also a pleasant medieval village to explore).

Montmorillon is a popular and interesting destination in the south-east of the department and well known as a book-lovers town. Further south in the Vienne, Civray has some interesting medieval buildings, highlight among them being the romanesque Church of Saint-Nicolas, and at Charroux you can see the impressive remains of the Abbey of Saint-Sauveur.

Vienne promotes itsef as a destination of amusement parks, animal parks, and outdoor leisure and as well as the well known Futuroscope there are a couple of other smaller theme parks, and a whole range of family-focussed activities.

Vienne is also a great destination for animal lovers - travel from the Island of Serpents (La Trimouille) to the Valley of Monkeys (Romagne) via the new 'Crocodile planet' at Futuroscope and the eagle displays at Chauvigny!

Garden lovers will want to visit the extensive planned gardens in Magné in the east of Vienne, where an extraordinary range of plants set-off very well the original farm estate that stands here.

Map of Vienne and places nearby