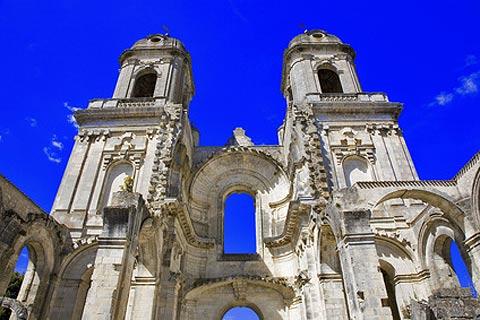 The position of Saint-Jean d'Angely, in the heart of the Charente-Maritime department and north of Saintes, put it outside the major tourist regions of France, but the town has several sites of interest and a pleasant historical centre that merits a visit.

The principal historical monument in the town is the remaining parts of the abbey church, now listed as a UNESCO heritage site as one of the religious monuments on the medieval pilgrimage routes through France.

The church includes a small part of the original 15th century church (flying buttresses and a part of the chevet). There is also a substantial facade with two towers - you can ascend the towers for a nice view across the town. This part of the church was built in the 18th century as the start of a grand plan to build a replacement for the earlier version, but the plan was never completed since the revolution put an end to monastic settlements.

Although the abbey church was never completed, the monks also constructed the associated abbey buildings in the 17th century, and these can still be seen as the Royal Abbey. Built in the classical style typical of the 17th century, these buildings are now used as the town library and music school.The Royal Abbey gained its name because the Sun King, Louis XIV, stayed here when attending a marriage nearby. 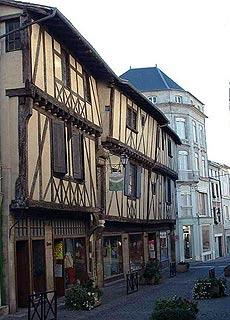 The centre of the town of Saint-Jean d'Angely contains an interesting mix of architecture, partly the traditional white stone houses of the region and also a good number of older half-timbered medieval houses. Part of the centre is also pedestrianised making it a pleasant place for a stroll.

Among the most noteworthy buildings in Saint-Jean d'Angely are:

* The Salle Alienor d Aquitaine, now the Salle des Fetes for St Jean d'Angely, has an interesting history - the arches that constitute the outside of the building were originally the cloisters in the Royal Abbey, brought here to construct the walls of a covered market. Then at the beginning of the 20th century the arches were filled in and the building converted to its current use.

Established in an imposing 19th century mansion that was once the Town Hall, this museum contains an eclectic collection of artefacts, and is best known for its exhibits relating to the expeditions by Citroen across the Sahara desert and across Africa in the 1920's, including one of the cars especially adapted for the journey.

Most leisure activities for visitors to Sant Jean d'Angely are focussed along the Boutonne River, which offers a pleasant place for a stroll and is also popular with anglers.

The tourist office also have a wide range of selected walks and cycle routes in the surrounding area and although they are in French only they are quite detailed and easily followed. We suggest the walk called 'Rando Secrets' as an introduction.

Enthusiasts of roman style architecture will also enjoy visiting some of the small churches in the surrounding villages such as those at Varaize, Matha and Bagnizeau to the south-east and Aulnay, Dampierre-sur-Boutonne and Saint-Mande-sur-Bredoire to the north-east, all within about 15 kilometres of St Jean d'Angely centre.

Map of Saint-Jean d'Angely and places nearby

Visit near Saint-Jean d'Angely with France This Way reviews