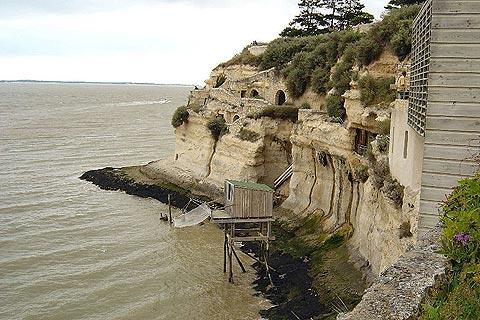 Meschers-sur-Gironde is located between Royan and Talmont on the western coast of France, in the Charente-Maritime department and on the northern edge of the Gironde estuary.

The section of coast here between Négade Point and Coubre Point is known as the 'Cote de Beauté'. While not a major resort, Meschers is popular with people from the surrounding region.

It is the coast and the beaches that attracts most people to Meschers - the sandy stretches of beach are attractively interspersed with rocky headlands and cliffs. The three main beaches are called Nonnes (the main beach), Vergnes (a little to the north) and Suzac.

Meschers-sur-Gironde also has a small port where there are a number of cafes where you can sit and unwind and admire the pleasure boats.

One historically interesting monument in the town is the church of Saint-Saturnin. Note that the belltower section dates from the 15th century and is much older than the rest of the church (17th century). There is also a small 19th century protestant temple.

The troglodyte Grottes de Regulus caves are another reason that people come to Meschers-sur-Gironde. The caves, carved into the chalky rock along the seafront, have served various purposes over the centuries, from grain storage to hiding contraband, and occasionally they have also been used as homes.

A visit to the caves will also allow you to appreciate the views across the Gironde estuary as you follow the Boulevard de la Falaise around the Point de Meschers to get here. The nearby Matata caves can also be visited.

The Church of Saint-Radegonde on a headland at nearby Talmont, itself listed as one of the 'most beautiful villages in France', is a particular local highlight just a few kilometres south of Meschers-sur-Gironde.

Map of Meschers-sur-Gironde and places nearby

Visit near Meschers-sur-Gironde with France This Way reviews

Plan your visit to Meschers-sur-Gironde, Charente-Maritime

A seasonal market is held in Meschers-sur-Gironde on Sunday, Monday, Tuesday, Wednesday, Thursday. (Markets are held in the morning unless stated.)