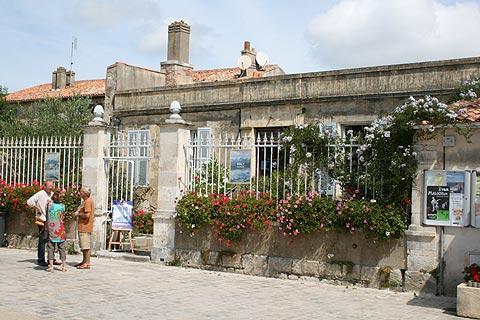 Ars-en-Ré is a village on the Ile-de-Ré, an island off the western coast of France, in Poitou Charentes - it is a small port town on the north-west coast of the island that is classified as one of the 'most beautiful villages of France'.

France This Way comment: the village is well known for its hollyhock lined streets and the surrounding salt pans, that have been in use for the last 800 years. The hollyhocks add a colourful backdrop to the streets of Ars-en-Ré so visit in summer if possible! 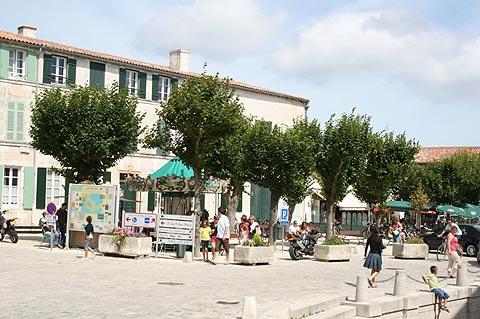 A small village, Ars-en-ré is a pleasure to explore, with numerous whitewashed houses featuring the traditional green shutters of the region and with hollyhocks growing all over the place.

The centre of the village is based around an attractive open central square, while the church, with its trademark spire, acts as the focal point of the village. During the summer the clocktower is open to the public, so you can see the carpentry work inside the spire and also views across the town and out to sea.

The spire on the Church of Saint-Etienne in the village served a double function - because of the location of the town it also acted as a guide to boats entering the region, hence its black and white painting to make it more visible to boats arriving in the harbour.

Be sure to amble around the backstreets of Ars-en-Ré a little to get a better feeling for the 'traditional' village. There are various interesting gardens and architectural features to be seen as you explore - note in particular the 16th century town house (the Maison du Sénèchal) with a decorative corner tower.

Ars-en-Ré also has a pleasant pleasure port (the most important on the Ile-de-Ré, with places for more than 500 boats) as well as a natural port close to the village surrounded by cafes and bustling with activity.

If possible try to visit Ars-en-ré when the lively market is being held: Tuesday and Friday morning all year around, and daily during July and August. In any event it is true that the village has a very different character during the summer season when it is a bustling and lively resort and in the winter when it is really very quiet. 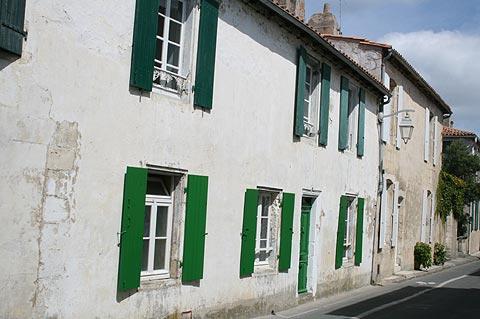 You can see the salt flats and oyster beds next to the village, both still active local industries here. One oyster farm here, the Huitrière de Ré, is open to the public so you can learn more apart the techniques used (tours start at 6pm each wednesday and thursday during summer months, see Huitrière de Ré for more information).

Also very near to Ars-en-Ré there are three traditional windmills - the Moulins de la Boire.

Of course, elsewhere on the Ile de Ré, which is a very popular summer destination, there are lots of other villages and beaches of interest to visitors: see Ile-de-Ré guide for details.

Map of Ars-en-Re and places nearby

Visit near Ars-en-Re with France This Way reviews

Plan your visit to Ars-en-Re, Charente-Maritime

Regular market(s) are held in Ars-en-Re each Tuesday.

A seasonal market is held in Ars-en-Re on every day except Tuesday. (Markets are held in the morning unless stated.)