Normandy has many charms, from the beautiful countryside and the lovely local architecture to the historic highlights such as Mont Saint Michel and Chateau Gaillard, and the attractive cliffs and beaches along the coast. Important sights such as the Normandy Landing beaches and the Bayeux tapestry are also very popular and Normandy is truly a region with something for everyone!

The Normandy region is on the coast of north-west France, with the English Channel to the north and Brittany to the west. 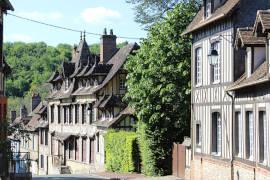 Because Normandy is so extensive and there is so much to enjoy we have summarised the highlights for each region below to help you decide which area is most interesting to you (beaches or countryside, historical monuments or pretty villages...). You can then find much more information in the individual travel guides for each department

From the most famous abbey in France to the most famous tapestry in the world, from cider orchards to picturesque villages and the famous 'Normandy landing beaches', Lower Normandy has a great deal of interest to the visitor.

The Calvados department occupies the north-east of Lower Normandy and includes most of the Normandy landing beaches (the beaches where the allied troops landed during the invasion of France in the Second World War), and several very popular seaside resorts.

Normandy also has many resort type beaches and coastal ports, for example at Deauville and Trouville, with their exceptional 19th century architecture carefully preserved, and also the picturesque harbour town of Honfleur (passing perhaps via the quiet resort at Villerville).

Passing towards the west along the coast of Calvados you can visit the resort at Villers-sur-Mer then on to reach Houlgate, with its traditional 19th century villas.

Historians will want to visit Dives-sur-Mer, the town from which William the Conqueror launched the Norman conquest of Britain, while the next resort a few kilometres further west along the Cote Fleurie is Cabourg.

Another very popular destination is Bayeux to see the famous Bayeux tapestry, a medieval tapestry relating the story of how William the Conqueror defeated England in 1066.

Also in Calvados you can visit the cathedral of Lisieux, an important pilgrimage centre, and at the town of Falaise you can see the medieval castle of William the Conqueror.

We also strongly recommend a visit to the village of Beuvron-en-Auge, a lovely traditional Normandy village to the south of Deauville.

Perhaps our favourite way to explore the local countryside and villages in Calvados is to follow the Normandy cider route (the route usually starts from Cambremer).

See the Calvados travel guide for more information and highlights

The Manche department is to the west of the region, with the abbey of Mont-Saint-Michel (the most visited site in France outside Paris) to the south-west and Cherbourg at the northern end of the Cotentin Peninsula.

Nearby you can also visit the town of Granville that protects the entry to the bay of Mont-Saint-Michel.

The more western Normandy landing beaches are to the east of the department, as is the village of Sainte-Marie-Eglise, well known for being the first town in occupied France to be liberated by parachutists in June 1944.

Among other highlights in Manche we suggest a visit to the gothic cathedral at Coutances, and a visit to Barfleur, classified as one of the 'most beautiful villages in France'.

See the Manche travel guide for more information and highlights

The south-east of the region is the Orne department, with rather less famous highlights than the northern parts of Lower Normandy but still a very pleasant area to explore with peaceful countryside and traditional small villages and market towns to discover.

An interesting introduction to the area is to visit Belleme and the relatively undiscovered natural environment of the Le Perche region, with the town of Mortagne-au-Perche.

Travel to Argentan to see the Chateau des Ducs and other historic monuments, and explore Domfront with its medieval castle and historic old town.

You can see more historic monuments in the centre of the busy town of Alencon, and the spa town of Bagnoles de l'Orne is ideal for those seeking rest and relaxation

You should also visit the picturesque village of St-Ceneri-le-Gerei to the south of the region, in lovely surroundings and a very pleasant area to explore. Whilst here be sure to visit the attractive Jardins de la Mansoniere.

See the Orne travel guide for more information and highlights

Upper Normandy is a region of art and history, from Richard the Lionheart's castle to Monet's gardens, with dramatic coastal scenery and important towns and resorts to discover along the way...

One of the most fascinating towns in Normandy, Rouen has an attractive medieval centre the highlight of which is a visit is the cathedral, famously painted 30 times by Monet and a masterpiece of gothic architecture.

The impressionist history of the region is also commemorated at La Bouille to the west of Rouen, while the Gardens at Giverny (better known as Monet's garden), are meticulously preserved to look like those famous paintings of waterlilies, and the most visited gardens in France.

Richard the Lionheart's impressive Chateau Gaillard, standing high above the village of Les Andelys on the Seine River, is another unmissable highlight when you explore the Eure.

The classified 'most beautiful village' of Lyons-la-Foret is another highlight in this region of Normandy, and we also enjoyed an afternoon exploring the town and cathedral at Evreux.

See the Eure travel guide for more information and highlights

The most visited region of the Seine-Maritime department is the Alabaster Coast, with its dramatic high chalky cliffs in the region of Etretat and Fécamp among the most beautiful coastlines in France.

In the inlets between the cliffs you will discover several pleasant and sophisticated little towns with yachts and casinos.

It is also here that you will discover the important ports of Dieppe and Le Havre, both worthy of investigating. The centre of Le Havre is protected as a world heritage site - because of its concrete architecture built in the 1950's during post-war development. Not necessarily what you came to Normandy to see but interesting anyway!

The imposing ruins of the abbey at Jumieges are another historically important monument in Seine-Maritime, and just one of several abbeys of interest to be visited between Le Havre and Rouen

The entry port at Caen is often passed through at speed on arriving in France, but deserves the time for a proper visit, as does the port at Cherbourg.

If you love seafood the coastal region of northern France including Calais, Picardy, Normandy and Brittany is the place in France to visit to find some of the best lobster, mussels, scallops, sea bass, monkfish, and herring.

The area also has very high quality farm produce, the climate is ideal for growing some of the best fruit and vegetables to be found in France, and the cheese and cider produced in the region are excellent, as are many other local products. A gastronomic dream!

Six unmissable highlights of a visit to Normandy

One of our favourite Normandy villages, Beuvron has many half-timbered buildings to enjoy
See Beuvron-en-Auge

The chance to see the pond at Giverny where Monet painted his famous waterlilies.
See Giverny

Map of Normandy and places nearby

Guest article 1: a suggested holiday itinerary for a visit to Normandy places to visit in Normandy