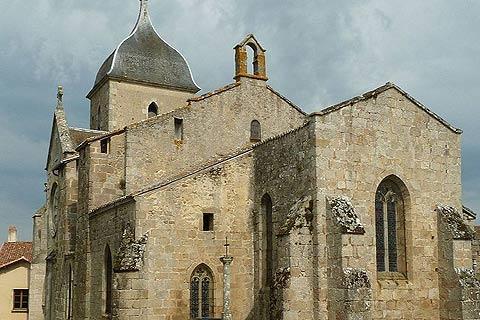 The village of Brigueuil is situated towards the north-eastern border of the Charente department (Poitou-Charentes region) of France, to the south-east of Confolens in a location that has been occupied since ancient times. Remains of a roman villa have also been found nearby.

The main highlight, situated in the heart of this small but picturesque fortified village, is the roman style Church of Saint-Martial. The well-proportioned church was built in the 12th century (and modified in the 15th century). Note in particular the unusual roof design of the belltower and the ornate stonework around the entrance. Inside the church you can see some vibrant 19th century stained glass windows.

Other notable historical structures in Brigueuil include a stone gateway through part of the original town ramparts through which you can enter the old town, and an associated tower.

A small part of the donjon that once stood here is still visible - built in the 11th century, the donjon originally had seven storeys but now only one remains; and an ornate stone gateway that is sadly all that remains of what once must have been a grand chateau here.

As you stroll the village streets you can see a few other interesting buildings, many in the attractive local light coloured stone and carefully renovated, such as the Maison du Juge.

There are abbey churches at two villages very close to here: at Saint-Junien you can see the Abbey of Saint-Amand while at Lesterps is the abbey church of Saint Pierre.

Visiting the village of Oradour-sur-Glane to the south-east of Brigueuil, is also a remarkable experience - the village was destroyed and all the inhabitants murdered during the second World War and the village has been preserved unchanged ever since.

Note: photo of Brigueuil is copyright

Map of Brigueuil and places nearby

Visit near Brigueuil with France This Way reviews

Plan your visit to Brigueuil, Charente

The French version of this page is at Brigueuil (Francais)