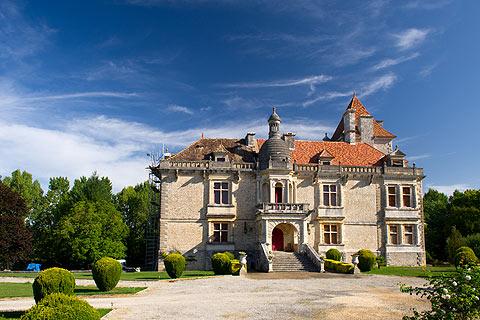 Marthon is a village to the east of the Charente department between Angouleme and Nontron (Dordogne) on the quiet banks of the river Bandiat.

There are several small highlights to enjoy in the village as you explore Marthon, including those mentioned below and small architectural details such as a fountain, a well, an old stone archway, and some attractive houses.

The most important monument here, and the one that dominates the rooftops of Marthon, is the castle keep - the Donjon de Marthon (also called the Tour du Breuil).

Dating from the 12th century, it is now only the lower part of the original sturdy square tower that had three towers and a small section of wall that remains of the original castle but the donjon still dominates Marthon village.

You can reach the castle via the roman style chapel-doorway below the donjon - this is a tall building that combines a chapel on the upper storey and the gateway to the castle below and is built into the defensive walls around the castle.

Another point of interest is the roman style Church of Saint-Martin - note in particular the belltower with arched openings and the statue in a niche above the entrance. Note the unusual arches inset in the walls - these are called 'enfeu' and are tombs of local dignitaries that were originally buried in the church walls.

This part of Charente is very quiet and visited for its peaceful countryside and unspoiled villages rather than its important monuments. You will want to visit the town and castle at La Rochefoucauld to the north of Marthon if you are staying in the region. Of course, Angouleme is only about 25 kilometres west of here and also merits to be explored.

Map of Marthon and places nearby

Visit near Marthon with France This Way reviews

Plan your visit to Marthon, Charente

The French version of this page is at Marthon (Francais)