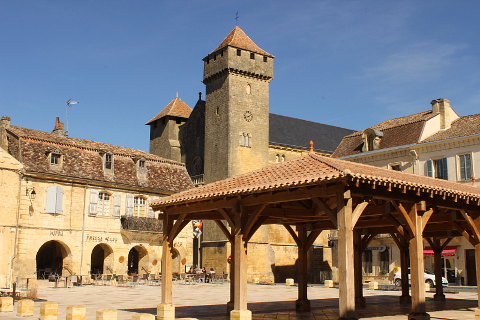 The Dordogne has stunning medieval castles, historical villages and towns, and the famous prehistoric caves of the UNESCO listed Vezere Valley to enjoy, each of them set in the attractive landscapes of the region, with rivers, forests and beautiful countryside, so it is no surprise that the Dordogne is one of the most popular destinations in France! 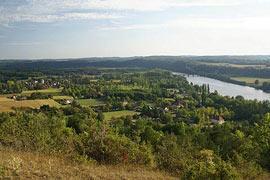 The Dordogne is one of our favourite departments in France, and because there is so much variety the main challenge is knowing where to start when describing the highlights - and for you to decide where to stay when you visit! To make your travel planning slightly easier we have divided our review further down this page into four distinct regions.

Note that the Dordogne area is quite large, perhaps two hours drive from north to south and a similar distance east to west, even more if the places are not close to the larger roads, so you are unlikely to see everything in one visit - no problem though, because you will certainly want to come back again!

In Perigord Noir you will find many of the most famous castles, towns and villages of the Dordogne region, many in spectacular locations, and with fascinating histories to tell - but you will also find more tourists and busier roads, especially in high season.

Sarlat is the 'medieval capital of the Dordogne' and perhaps the most lovely town in France, and is in the heart of Perigord Noir.

Three of the villages here are listed among the 'most beautiful villages in France: the riverside setting, ancient village streets and castle make Beynac a highlight for visitors; the ancient stone houses along the river at La Roque-Gageac make it very scenic and Domme is a hilltop village with some of the best views in the Dordogne as well as extensive caves in the village centre. Close by the pretty village of Carlux has a ruined castle in its centre.

To the west of these principal towns and villages, Saint-Cyprien is another attractive Dordogne market town.

Among other castles in the area, Chateau de Montfort is a fairytale castle on a hill a few kilometres from Sarlat, Chateau de Puymartin is another of the lovely castles in Perigord Noir, and the attention to historical detail and the views across the river make Chateau de Beynac a treat for visitors.

Chateau de Castelnaud is both a medieval castle and an extensive museum of medieval warfare - your children will love it! An interesting contrast nearby, the 15th century Chateau des Milandes is well known because Josephine Baker owned the castle during the 20th century.

There are also some attractive gardens to visit whilst in the area. The Jardins de Marqueyssac is perhaps the most popular but the Jardins d'eau at Carsac-Aillac and the Jardins de Cadiot at Carlux are also a treat. Near to La Roque Gageac the Jardin de la Ferme Fleurie is a pretty garden bursting with colour and on the edge of Domme the Jardins d'Albarede sit in a pretty valley.

France This Way comment: this is certainly the most visited part of the Dordogne and contains many of the highlights although we would be inclined to visit outside high season if possible to appreciate it at its best.

As well as well known medieval towns such as Bergerac, on the Dordogne river and with a lovely historic centre, this is a region to discover many small bastide villages and towns (bastides are medieval 'new towns' founded in the 12th-13th centuries) several of which are found in the southern Dordogne (with others further south in Lot-et-Garonne such as Villereal and Monflanquin).

Several villages here are classed among the 'most beautiful villages in France' such as Belves, a very attractive village with a great deal of character; Monpazier, among our favourite five villages in the whole of France and unmissable when you visit; and Limeuil is a pretty village on the confluence of the Vézère and Dordogne rivers.

Among the other popular towns and villages, Beaumont-du-Perigord is a small traditional bastide town; Cadouin is a very small village with an imposing abbey, listed as a UNESCO heritage site; to the south of Bergerac, Eymet is a traditional medieval bastide town; Issigeac is an unspoiled medieval village very well known for its Sunday market. Molieres is officially an 'unfinished' bastide but is still very pleasant to explore!

The renowned wines of Monbazillac are produced just south of the Bergerac where you can visit the château of Monbazillac. The hilltop position and far reaching views make Chateau de Biron one of our favourite castles in Perigord Purple.

East from Bergerac, Le Bugue is a small town on the river well placed to explore the centre of the region and Tremolat is a picturesque village - the nearby Cirque de Tremolat has incomparable views across the Dordogne river. Slightly off the more popular tourist trails, Villamblard is a very traditional French town in the countryside north of Bergerac.

France This way comment: many visitors love this region for its unspoiled nature, medieval villages, and also the lower visitor numbers and quieter roads

Les Eyzies is a small village which would generally be considered as the centre of any tour of the Vézère valley: see Les Eyzies. Close to Les Eyzies, Font-de-Gaume has the only prehistoric paintings in the Dordogne where visitors can see the originals. Another very interesting prehistoric settlement is set into the side of a cliff along the Dordogne river at La-Roque-Saint-Christophe.

Among other towns and villages here, Saint-Leon-sur-Vezere is a very pretty village on the Vézère river centred around a lovely 12th century church; Plazac is a very tiny village, but also very picturesque; Saint-Amand-de-Coly is another of the exceptionally pretty villages to be found nearby.

The most important castle in this part of the Dordogne, despite being abandoned for several centuries, Chateau de Commarque has now been rediscovered is a fascinating castle to visit. A little further north, the world renowned Gardens of the Imagination in Terrasson are a major highlight.

France This Way comment: the sense of contact with prehistory along the Vezere as you visit the caves and prehistoric dwellings make it a very interesting region, and it is also very scenic, perhaps the most picturesque part of the Dordogne department.

Less visited than the southern parts of the Dordogne department, the north also has its share of market towns and castles, beautiful scenery and picturesque villages, including Perigueux, 'capital' of the Dordogne. Part of these northern areas fall within the Perigord-Limousin Natural Regional Park.

Perigueux is an important regional centre with an imposing byzantine cathedral and interesting medieval town. North of Perigueux, Brantome is a town and abbey in a particularly lovely setting on the Dronne River and you can also visit Bourdeilles, and the castle around which the pretty village developed, which make for a lovely stroll in the northern Dordogne.

Other towns include Nontron, a quiet town to the south of the Natural Regional Park of Perigord-Limousin; Thiviers, renowned for being the foie gras capital of the northern Dordogne; Sorges, known as the truffle capital and also with an interesting garden of 50 parterres called Le Bouquet; Riberac, a quiet town well known for its important regional market; and the market town of Excideuil.

Among the castles of interest here are the Chateau de Jumilhac, sometimes called the 'sleeping beauty castle' and famous for its multi-spired roofline; the Chateau de Puyguilhem, unusual in being a renaissance period castle - most here are medieval in origins; and the Chateau de Hautefort - often claimed to be the most beautiful castle in the Dordogne, Hautefort also has very impressive views.

Our favourite village in the northern Dordogne, Saint-Jean-de-Cole is in a riverside setting and has an old stone bridge, a castle and many lovely houses.

France This way comment: this region is quite different in character to the 'central' Dordogne and provides a quite different visitor experience, with less major sights but more peace and quiet. Lovely region to unwind!

Apart from exploring many of the towns and villages there are numerous leisure activities available in the Dordogne. Our personal favourites include:

Map of Dordogne and places nearby