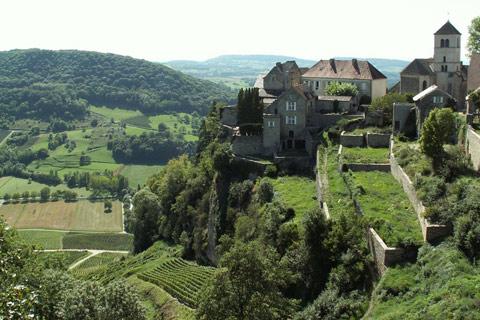 Almost every region in France has something interesting to discover - quiet villages, stunning scenery, historical buildings lost in the countryside, beaches...

...so before rushing to visit the most popular regions why not think about somewhere else for a change? You can avoid the crowds and still have a great time discovering the 'real' France!

France This Way has a simple goal - to introduce the most picturesque, the most scenic, and the most interesting places to visit in France. To help you better plan which part of the country you would like to visit there are several ways below to start exploring:

The most popular French regions with visitors include Brittany, the Dordogne and the Cote d'Azur (along with the rest of Provence), and of course and many tourists like to visit Paris.

Explore the regions of France

The information in the region travel guides below includes all the best towns in France, the favourite and famous places to visit, the most beautiful villages, the French heritage sites and historic monuments in France, the castles and gardens....and much more!

Alsace (now part of the Grand-Est region) is in eastern France, on the border with Germany to the east, and Switzerland to the south. It is the smallest region in France, and lies between the Vosges mountains and the Rhine.  Strasbourg is the capital of this heavily forested region, and the climate is almost 'continental' - hot summers and dry, cold winters.

The region is particularly visited for the very pretty villages, the Alsace vineyards and wine route, and the scenery.

Aquitaine and the Dordogne

Aquitaine (now part of the Nouvelle-Aquitaine region) is in the south-west corner of France. It reaches Spain at its southern frontier, and the Atlantic Ocean runs along the western edge of the region. For visitors the region falls into three distinct regions - the coasts and forest along the western edge; the Dordogne and Lot-et-Garonne departments further inland, and the western pyrenees to the south. Major cities in the region include Bordeaux, Biarritz and Perigueux.

The region is usually visited for the long sandy beaches and popular resorts along the Atlantic coast, and the castles and villages of the Dordogne.

The Auvergne (now part of the Auvergne Rhône-Alpes region) is part of the central (non-coastal) part of France, in the centre of the Massif Central. It is largely an isolated region of mountains, and dramatically rugged countryside and rocky gorges. Clermont-Ferrand is the capital of the region.

The region is typically visited for the impressive scenery and outdoor leisure activities.

Brittany is a region of north-west of France, surrounded by the Atlantic ocean with the English channel to the north and the Bay of Biscay to the south. The capital of the region is Rennes.

The region is visited for its beaches, historic towns and quaint fishing villages as well as the chance to explore the islands off the coast.

Burgundy (now part of the Bourgogne Franche-Comté region) is found in the center of France, just north-east of the geographical center of the country and south east of Paris. Historically, and still now, it is one of the richer parts of France, and has been since hundreds of years ago when the Burgundians sided with the English during the Hundred Years War. Dijon is the capital of the region.

The region is often visited for the famous vineyards, the scenery and historic towns and villages.

The Centre-Val de Loire region is found in northern-central France and includes one of the most popular regions of France for visitors - the Loire Valley. It is here that many of the most famous chateaux of France are to be found. The capital of the region is Orléans.

The region is typically visited for the numerous imposing Renaissance castles, the impressive historial towns along the Loire river and the chance to enjoy the scenery along the rivers.

Champagne-Ardenne (now part of the Grand-Est region) is found to the north-east of France, where it's frontier borders Belgium. The capital of the region is Chalons-en-Champagne.

The region is of course best known as being home to the famous champagne vineyards, which attract visitors from around the world.

Corsica is an island off the south-east of France, with a picturesque coastline and a mountainous interior. Corsica has 1,000km of coastline and more than 200 beaches, among them some of the best beaches to be found on the Mediterranean.

As well as the beaches it is the scenery, the mountains and the resorts that attract visitors to Corsica

Franche-Comte (now part of the Bourgogne Franche-Comté region) is found to the east of France - the region borders onto Switzerland and extends from the Jura mountains to the Alps. Much of the countryside is an unspoiled mix of forests, hills and mountains, and open country interspersed with lakes and rivers.

Visitors come to Franche-Comté for the unspoiled and beautiful scenery as well as the pretty villages, lakes and numerous outdoor leisure opportunities.

Languedoc-Roussillon (now part of the Occitanie region) is in southern France, on the Mediterranean coast and extends to Spain at its southern border. An interesting region with dramatic landscapes, impressive gorges, and plenty of medieval architecture.

The principal attractions for visitors include the extensive coast with its sandy beaches, the beautiful isolated countryside and villages in northern Languedoc, the historic towns with Roman monuments and the cathar castles

Limousin (now part of the Nouvelle-Aquitaine region) is in the centre of France, around the town of Limoges. Much of the region is at an altitude of more than 350 metres, with a landscape of hills covered with woodland. The climate is not especially inviting - rain is frequent, and winters are very cold, so it is not always on the tourist circuit but a charming region to discover in the summer!

Visitors come to this region to enjoy the large areas of unspoiled countryside, beautiful scenery and traditional towns and villages

Lorraine (now part of the Grand Est region) is a 'frontier department' in north-east France that shares borders with three European countries - Belgium, Luxembourg and Germany. The department has the unenviable distinction of being the main invasion route for France, and many a hostile invasion has crossed the region in the last 1200 years...many of which have left their mark for visitors to discover and these form a large part of the tourist attraction

Normandy is on the coast of north-west France, where it faces the English Channel. Caen is the capital of the region.

Normandy is a very popular destination, visited for many reasons including the beaches, the belle-epoque seaside towns, the pretty countryside and some of the loveliest rural architecture and gardens to be found in France

The Pyrenees mountains are found along the border between France and Spain, and the Midi-Pyrenees region (now part of the Occitanie region) covers the middle section of the area. The Midi-Pyrenees region reaches from the Spanish border to the south and a long way north into areas that are quite remote from the Pyrenees mountains themselves eg Rocamadour in the Lot Department.

Visitors to the region will discover the spectacular mountain scenery while those further north will discover lovely villages and towns, and less mountainous but still very attractive countryside

There is one principal attraction that the Calais region (now part of the Hauts-de-France region) is famous for - the battlefields and cemeteries of the WWI battles. Between Amiens and Lille, the battlefields are still a major destination, some of the trenches are kept intact to help the visitor better understand the battles and conditions that were faced, and the cemeteries are very poignant to visit

The Provence region covers the south-east corner of France. It is perhaps the most visited and most loved region of France, and includes beautiful Mediterranean coastline with famous resorts such as Cannes, Monaco and Nice, medieval villages clustered among the olive groves in sun-baked countryside, and to the north the mountainous regions of the Alps.

Visitors come here for the resorts and beaches, the mediterranean weather, the beautiful scenery, remarkable medieval villages and much more...

Île-de-France is the most populated region of France, and includes Paris so it is often referred to as the Paris region. Many of the most famous places in France are found in Paris, and everyone who visits falls in love with the capital of France, as much for its shady boulevards, street side cafes and general atmosphere as for the famous sites such as the Eiffel Tower, the Louvre and the Champs Elysées

The Pays de la Loire region is situated between Brittany and Poitou Charentes, on the western side of France. Often you will be in this region, when you think you are in the Loire Valley or Brittany! Note that Nantes, formerly the capital of Brittany, is in this region.

Picardy (now part of the Hauts-de-France region) is a large flat area of open fields, with a fame arising from the WWI Battle of the Somme in the north of the region, and is also a region with a great deal of unspoiled countryside and some attractive towns and villages

Poitou-Charentes (now part of the Nouvelle-Aquitaine region) is found half way up the western side of France, fronting the Atlantic Ocean / bay of Biscay. The capital of the region is Poitiers. The coastal region is said to be the second sunniest region of France (after Provence)

The principal attractions for visitors are the resorts along the coast, the beaches and villages on the Ile de Ré, and the historic town of La Rochelle.

The Rhône-Alpes region (now part of the Auvergne Rhone-Alpes region) is found in south-east France, where it borders Italy and Switzerland to the east, Provence to the south, and Burgundy to the north. It is a wild and very beautiful part of France.

How to use this guide

There are thousands of pages of information about France and places in France in this site, and various ways to access them:

1) Select a region above to see various information about many of the places to visit in France. These include for each region the villages that have received the accolade 'most beautiful villages in France', the sites listed as world heritage sites by UNESCO, and many of the other places and highlights.

3) If you know the name of a place in France you want to visit, but not the department or region it falls in, use the search boxes to find it within the site.

4) for a complete searchable index of all 36,000 places in France see French communes

Please do spend some time exploring the different places in France in this section - there are more than 1500 towns, castles and villages listed, and much more, most with photos.

Somewhere we've missed? Let us know, so that our France Travel Guide is as complete as possible!