The Burgundy region has a fascinating mix of unspoiled countryside, historical towns and monuments, many of them a result of the illustrious and wealthy past of the region, and is also well known for the exceptional Burgundy wines produced here

The Burgundy (French name 'Bourgogne') region is found in central-eastern France to the south-east of Paris, between the towns of Sens and Auxerre to the north and Maçon (just north of Lyon) to the south. 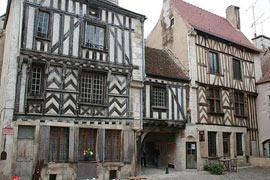 Among the reasons that people visit the region are the attractive countryside including the Morvan Regional Park, the numerous historical towns and villages, and the interesting abbeys and other important monuments.

Wine enthusiasts will also appreciate the chance to see the vineyards and sample such renowned wines as Chablis, Beaune, Macon and Nuits-Saint-Georges, just a few of those produced in this region of France and another excellent reason to visit!

Burgundy covers quite an extensive area and includes four French departments: Cote d'Or (north-east), Nievre (south-west) , Saone-et-Loire (south-east) and Yonne (north-west). Below we mention some of the most popular highlights and places to visit in each department, and you will find much more detailed visitor information in the individual department travel guides.

Before you visit Burgundy it is useful to know that for several centuries (until 1477) the region was a state independent of France and important religious centre of Europe, and sided with the English against the French during the Hundred Years War.

At that time it was a very rich state, and continues to be one of the most wealthy regions of France to this day: it is the legacies from this golden age of prosperity that still provide many of the major attractions in the region.

The Cote d'Or department is an interesting introduction to Burgundy, with several of the region's most interesting and scenic highlights, towns and villages.

In the south-east of the department you can visit Beaune - famous for its wine and for its very impressive medieval hospital complex (the 'hotel dieu') and also the extensive historical centre of Dijon, our favourite city in the region and with a great deal to discover.

The most visited historic monument in Cote d'Or is Fontenay Abbey, one of the most interesting and complete abbeys and architectural treasures in France (close to Montbard).

There are several particularly attractive villages and small towns in Cote d'Or, including in particular Chateauneuf-en-Auxois and Semur-en-Auxois. We also particularly enjoyed visiting the small fortified village of Flavigny, which is classified as one of the 'most beautiful villages of France'.

To the east of Cote d'Or at Chatillon-sur-Seine you can see the fascinating Treasure of Vix, with artefacts from the burial site of a queen that lived here 2500 years ago.

The town of Saulieu in the south-west of the department is a gateway town to discover the natural environment of the Morvan regional natural park (see Nievre below).

See the Cote d'Or travel guide for more highlights and places of interest.

The Yonne department is best known for its medieval architecture, and also has several very attractive towns and villages to explore.

There are numerous towns and villages in the region worth visiting, including Avallon (a personal favourite) and also Sens, Joigny and Tonnerre, and Auxerre, each of which has an interesting historic centre.

Among the smaller towns and villages in this part of Burgundy we particularly recommend you visit Noyers-sur-Serein, which has a very attractive medieval old town with numerous half-timbered houses to see. We also enjoyed exploring the small village of Montreal.

No visit to Yonne would be complete without a wine-tasting afternoon at the village of Chablis, which is famous worldwide for the fine wines produced from the vineyards on the hills surrounding the village.

Yonne also has several historic monuments of particular interest. Visitors to Yonne will certainly want to visit Vezelay to see the abbey (and the pretty village of Vezelay itself), and the abbey at Pontigny.

It was here in Pontigny Abbey that Thomas Becket took refuge from the English King Henry II in the 13th century.

There are also several castles of interest in Yonne, with those at Ancy-le-Franc castle and Tanlay castle among the most popular. An interesting contrast is provided by the project to build a brand-new castle using only techniques and materials available in medieval times at Guedelon.

Outdoor enthusiasts will enjoy visiting the Nievre department with the quiet roads and paths, in particular within the Morvan Natural park being very popular with hikers and cyclists.

Although Nievre has less important towns and monuments than the other departments in Burgundy, there are still some notable places to visit. Particular highlights include:

The department is best known for the chance to enjoy the unspoiled countryside, with small-scale farms, streams and ancient woodlands on the rolling countryside that we associate with Burgundy.

Situated to the east of the department, the Morvan Regional Park is a particularly scenic part of Nievre, and often entered via the gateway town of Corbigny.

Saone-et-Loire in the southern part of Burgundy is a less established tourist destination than the northern departments of Burgundy, but still has places of interest to discover and explore.

The highlight for visitors is certainly the 11th century abbey at Cluny, which now features impressive 'enhanced reality' screens to help you better see the abbey at the time it was built.

The basilica at Paray-le-Monial and the church at Anzy-le-Duc are among the other important religious monuments in this part of Burgundy.

Stepping further back in time you can see substantial Roman ruins at Autun, as well as a romanesque style cathedral with an impressive entrance and other historic monuments. The towns of Tournus and Macon are also highlights of a visit to this region.

Smaller towns and villages that we enjoyed visiting in Saone-et-Loire include the picturesque village of Semur-en-Brionnais and the historical centre of Chalon-sur-Saone, and also the attractive village at Brancion.

The renaissance style chateau at Cormatin is also a popular attraction in Saone-et-Loire, dating from the 17th century and surrounded by moats and French style gardens.

Map of Burgundy and places nearby