You are here: France Informationculture

Through history, and perhaps above all during the 19th century, France has played a leading role in the arts and has been influential in their development both within France and elsewhere, especially across Europe.

The French artists, the poets and writers, the music and the architecture are perhaps the best known examples  - think of the chateaux of the Loire Valley, or perhaps the  Impressionist Art movement that largely originated in France, or the great novels by Victor Hugo or Marcel Proust.

But culture is not just found in the great arts of the past. During the 20th century the world has changed, and French film directors have had a great influence on the industry, while television has also emerged as a great cultural force around the world.

Culture also encompasses the day-to-day living in a country - for example, the French tradition of eating fine foods and drinking fine wine is also an important part of their culture. See the individual sections below for more details about many aspects of French culture, both now and in the past:

From the great renaissance chateaux of the Loire Valley and Versailles to the modernist works of Le Corbusier, via such experimental structures as the Eiffel Tower, France has a long heritage of being at the forefront of architectural trends - and of incorporating other elements to create something new. See French architects and architecture for some of the better known french architects and their works

The heyday for French literature was surely the 19th century, when such great writers as Victor Hugo, Proust and Balzac were at the forefront of literary trends while also sustaining a 'mass-market' appeal. See French writers and poets

While rarely achieving the commercial success of their US counterparts, France has created many great films - perhaps most of all with the black and white films and nouvelle Vague experiments of the 1950s and 1960s. See French film directors for more information.

It is true that modern French pop music is often accused of being a pale imitation of that produced elsewhere. True or not, there is an active music industry in france now, and has been since the end of the 19th century when such classical composers as Berlioz, Debussy and Ravel were composing music whose popularity endures to this day. See French classical music and composers and pop music in France

A bit of a random selection of thoughts and comments on modern culture in France, and a couple of long-standing French traditions: 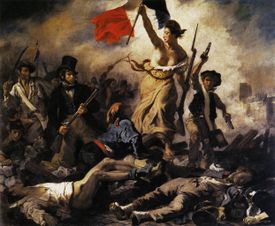 Do the symbols of a country form part of its culture? Not always perhaps but in the case of a few it is the case. Among the best known symbols of France are the Flag of France (the only official symbol); Marianne, symbol of Liberty; the cockerel and others...see French symbols for information.

Likewise the French currency and the French Franc are an integral part of french history and culture, especially now that they have been superceded by the euro.