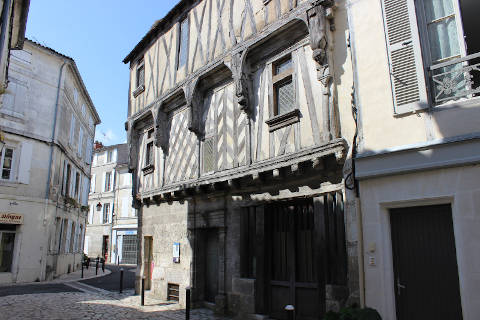 Charente is a 'quiet' department in terms of visitor numbers, best known for offering the chance to enjoy peaceful and unspoiled countryside and the towns of Cognac and Angouleme.

The Charente department is the south-eastern part of the Poitou-Charentes region, situated in west-central France and to the north-west of the Dordogne department.

Among the scenic highlights in Charente, exploring the course of the river Charente itself is popular and offers opportunities for boat trips and the chance to quietly enjoy the countryside.

There are some interesting sights here in the north-west, including the abbey at Nanteuil-en-Vallee; also Tusson with its medieval monastic garden; the quiet town of Ruffec; and Verteuil-sur-Charente, one of our favourite villages and best known for its picturesque castle on the banks of the Charente River.

Also visit the Chateau de Bayers and its associated gardens (dating from the 12th-17th century) at the village of Bayers, just south of Verteuil-sur-Charente.

Heading towards the north-east Charente the countryside changes in character - there are more areas of woodland and quiet enjoyment of the countryside is what attracts visitors to this region known as the Charente-Limousin - the number of lakes in this Haute-Charente area also adds to the leisure opportunities.

In this region we suggest you explore the old town and bridge at Confolens, in a tranquil setting on the Vienne River, and the villages of Brigueuil and Saint-Germain-de-Confolens. Not far from Brigueuil at Etagnac the Chateau de Rochebrune is a small but picturesque moated castle.

The town of Cognac is of course best known for the drink of the same name, and enthusiasts will find plenty of opportunities to learn about the history and production of cognac, as well as ample opportunities to try it. You will also see many vineyards that produce the grapes for producing cognac in the countryside around the town.

Also in the central part of the department is Angouleme, the most important town in the Charente department and best known for its cathedral and for the international Comic Festival held in Angouleme each year.

Other suggested detours in central Charente include trips to see the village of Saint-Simon; the birthplace of Francois Mitterrand at Jarnac; and a visit to the castle at La Rochefoucauld, reminiscent of those we might expect to see in the Loire valley.

We also found that Mouthiers-sur-Boeme (south of Angouleme) had a surprising number of interesting monuments in and near the town, and enjoyed a stroll around the attractive small village of Marthon a little further east.

There are many interesting examples of roman style architecture in the region, typically small 12th century churches in small villages. The abbey at Saint-Amant-de-Boixe north of Angouleme is among our favourite examples.

Other places we recommend to visitors include the castle and village of Villebois-Lavalette, the village of Barbezieux (which also has a castle) and Charmant where you can see the source of the river Boeme.

The village of Aubeterre-sur-Dronne (near the south-east border of the Charente department) is especially well known for its substantial troglodyte church (which is most unusual and very interesting).

Note: Aubeterre-sur-Dronne is the only village in the Charente department to be classified as one of the 'most beautiful villages in France'.

Also in the south-west of the Charente you can visit the quiet market town at Jarnac and take a stroll along the waterfront.

There are four gardens in the department that have been officially designated as 'remarkable gardens', at Bioussac; the Logis de Forge at Mouthiers-sur-Boeme; Chaigne Garden at Touzac and the medieval garden at Tusson.

Map of Charente and places nearby