Alsace is a lovely and fascinating region of eastern France to explore, with impressive cities such as Strasbourg and Colmar, the Alsace wine route to follow, historical castles set on isolated hilltops, pretty villages sitting quietly in the vineyards and forests of the region, and large areas of protected and scenic countryside 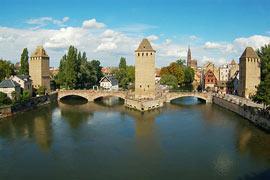 Alsace is found in eastern France, on the border with Germany to the east and the Lorraine region of France to the west. It is the smallest region in France and very pretty in its location between the Vosges mountains and the Rhine.

The climate in Alsace is almost 'continental' in nature with hot summers and dry, cold winters. Combined with the fertile ground this creates an ideal environment for grape growing and wine production.

The 'principal attractions' that bring visitors to Alsace include:

Below we introduce the principal highlights of each department - you can then visit the department guides for Haut-Rhin and Bas-Rhin for much more detailed information to find visitor guides for the individual highlights.

Strasbourg is the capital of the Bas-Rhin, which is an unmissable highlight when you visit.

As elsewhere in Alsace you will also find a lot of very pretty villages to explore including Hunspach and Mittelbergheim among the most popular with visitors.

Other popular destinations here in northern Alsace include several of the better known Alsatian castles such as the imposing Chateau du Haut-Koenigsbourg and the evocative ruins of Chateau Andlau, and also the important pilgrimage site at Mont-Sainte-Odile

An equally moving destination in this part of Alsace is Le Struthof, the only concentration camp built in France in the Second World War.

To the north-west of Bas-Rhin the landscape changes as you enter the Regional Natural Park of Vosges du Nord.

This quiet region of densely forested hills, small streams and rivers and rocky outcrops is very beautiful and well worth exploring - Neuwiller-les-Saverne is to the south-west of the park and Lembach to the north-east.

The storks are a particular distinctive feature of Alsace. At one time every tall roof and steeple seemed to have a resident stork, but these then suffered a serious set-back and almost disappeared from Alsace.

Happily a successful breeding programme has succeeded in re-introducing them to the region and they are again a popular sight, and a number of towns also have a 'stork park'. To ensure the birds stay in the area a stork is kept in captivity for 3 years, after which it loses its migratory instincts (though its young will still migrate).

The larger towns in southern Alsace include Colmar, with an impressive historical centre, and Mulhouse, well known for its important museums.

There are also numerous picturesque villages, among them some that are also classified among the 'most beautiful villages of France' (Eguisheim, Hunawihr and Riquewihr).

Another major attraction here is the ecomuseum at Ungersheim which provides a very interesting glimpse of life gone by, with more than 70 historic buildings reconstructed on one site.

The most important religious monuments in Haut-Rhin include the romanesque abbey at Murbach and the 11th century abbey church at Ottmarsheim.

To appreciate the natural environment you can explore the Regional Natural Park of the Ballon des Vosges which occupies much of the western Haut-Rhin.

While there are less important towns and villages here in the west it is a very scenic region which is popular with hikers and cyclists and has several impressive viewpoints - the most visited is the Grand Ballon to the south-west of Murbach.

As well as its fabulous wine Alsace has some hearty food specialities. Baeckeoffe, a hearty stew with pork is a favourite as is Flammekueche which is a kind of cross between a savoury tart and a pizza and appears on almost every menu in Alsace.

Bretzels, a savoury salty bread in the form of a knot, and Kougelhopf, a delicious brioche with sultanas and almonds, are sold in most bakers and should be sampled during your visit.

Six unmissable highlights of a visit to Alsace

The city of Strasbourg and its historical centre is one of our favourite places in France.
See Strasbourg

Just one of many beautiful villages in Alsace, Eguisheim has numerous traditional half-timbered houses
See Eguisheim

Hunspach is one of our favourite Alsace villages, in part because of the many well maintained gardens
See Hunspach

Map of Alsace and places nearby