The castle is in an impressive position, on a rocky spur above the banks of the Tardoire river and overlooking the town and countryside.

France This Way comment: the Chateau de La Rochefoucauld is probably the most attractive castle in the Charente department and in an attractive location, so although it does not quite match the beauty of castles you can visit in the Lore Valley you will want to visit if you are exploring this part of France 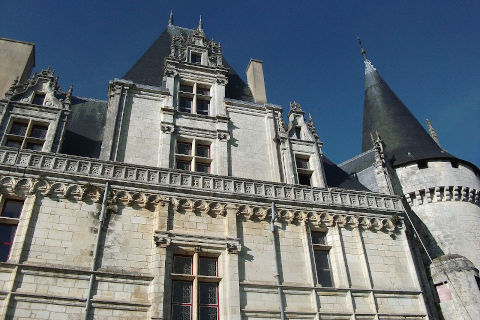 Most unusual for a historic castle, the Chateau de La Rochefoucauld has been owned by the same family for its entire history (since the 10th century). Originally the castle was a fortified 11th century building - the donjon is the main feature from this period.

Following enlargements during the 15th century, it was then converted into an impressive renaissance dwelling in 1520. Most notably it was at this time that the grand staircase was added as well as the towers, the south wing and the splendid three-levelled open galleries. It is possible but not certain that the staircase was designed by Leonardo da Vinci.

The Chateau de La Rochefoucauld was further transformed during the 17th and 18th centuries with the demolition of most of the medieval castle, to create the views from the courtyard, and the addition of the west wing. The original west wing, built in the 17th century, was destroyed in a fire and rebuilt in the 18th century.

As a consequence of this long period of development, you will see that the castle has various different architectural styles: the roman style donjon, the 15th century fortress, the 16th century renaissance elements and the 18th century additions, around a central courtyard that overlooks the town of La Rochefoucauld and the Tardoire river.

Happily these different parts of the building all work together very well in the impressive castle we see today: the ensemble is both attractive and interesting, and there is a great deal of fine detail in the workmanship to be admired. Highlights include the external balconies around the courtyard, the spiral staircase, and the ceiling in the chapel.

Inside the castle your tour includes several salons, bedrooms and the kitchens, with these rooms furnished quite simply but including various objects of interest such as paintings, mirrors and decorated walls.

The gardens around the Chateau de La Rochefoucauld are also carefully maintained in the traditional French style and held in almost as much esteem as the castle itself.

The visit costs around 10 euros. The Chateau de La rochefoucauld is open all year except January and February, but is closed on Tuesdays. 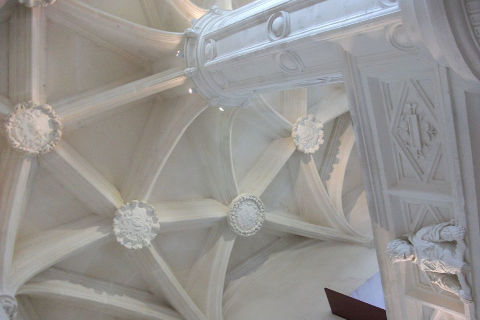 The town around the castle is pleasant to explore: see the La Rochefoucauld guide. Although there are several small towns and villages in the region near La Rochefoucauld, the principal town of interest to visitor is at Angouleme.

See more castles in France. You can find more travel ideas in the Charente guide and the Poitou-Charentes guide.

Map of Chateau de La Rochefoucauld and places nearby