With volcanic landscapes and mountains, picturesque villages and castles, the Auvergne region has a very distinctive character that grows on you the more you explore. Among other highlights don't miss the pilgrimage town at le Puy en Velay.

The Auvergne is situated in central-southern France, in the centre of the Massif Central. An isolated region of mountains and dramatically rugged countryside and rocky gorges, Clermont-Ferrand is the capital of the region. 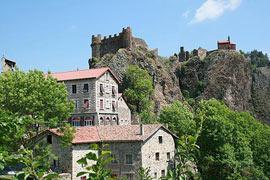 It is the varied and beautiful scenery that is the principal attraction in the Auvergne, perhaps best known for the forested volcanic landscapes within the Natural Regional Park of the Volcanoes of the Auvergne, and the scenic Parc Naturel Regional Livradois-Forez.

There are also interesting towns and villages, castles and historic monuments to explore, including more than ten villages classified among the 'most beautiful villages of France' and the historic pilgrimage town of Le Puy-en-Velay

The Auvergne is an extensive region and away from the principal routes (the A75 autoroute crosses the region from north to south and the E70 from east to west) the roads are often slow, so you are unlikely to explore the whole region during one visit.

Places that look quite close together on the map can be much further apart than you expect if there is no direct road! Much of the region is difficult to reach during winter and due to its altitude the Auvergne gets quite a lot of rain and snow so we suggest you visit in summer if possible to see the region at its best.

There are four departments that make up the Auvergne region: Puy de Dome, Haute Loire, Cantal and Allier. To help you plan which area of the Auvergne to visit we have summarised their principal highlights below, then see the individual travel guides for each of the departments for more detailed information.

Cantal is a peaceful, slow-moving department to the south-west of the Auvergne with traditional unspoiled towns and attractive scenery to discover

Highlights here include the town of Aurillac and the cathedral town of Saint-Flour.

There are two 'most beautiful villages' to the north of Aurillac that will be of particular interest to visitors to the Cantal: Salers and Tournemire.

Among the other picturesque villages we enjoyed visiting here are Vieillevie and Mourjou, and the medieval village of Marcoles.

Best known for its natural highlights, especially the volcanoes around Puy-de-Dome itself, this Auvergne department also has an interesting selection of villages and towns to discover.

Highlights of the Regional Natural Park of Auvergne Volcanoes include the Monts-Dome, Monts-Dore and Cantal mountains. In particular it is the Chaine des Puys and the views across this row of extinct volcanoes from Puy-de-Dome that attracts many visitors to the region.

To the east of the Puy-de-Dome department you can also explore the countryside of the Livradois-Forez Regional Natural Park.

The important regional centre of Clermont-Ferrand with its imposing black cathedral is the largest town in the department while we also enjoyed exploring Ambert and the old centre of Issoire.

Other towns of interest include Riom and the spa town at Volvic, famous worldwide for its bottled water. Thiers, best known for the famous Thiers knives and cutlery produced in the town, also has an attractive historical centre.

If you are visiting for winter sports or thermal spa treatments La Bourboule and Mont-Dore have both been established centres since the 19th century.

Historical monuments of interest in Puy-de-Dome include the Chateau de Murol and Mozac abbey, and the exceptional 12th century church at Saint Nectaire.

Villages we particularly enjoyed exploring include Montpeyroux, Saint-Saturnin, Saint-Floret and Usson, each classified among the most beautiful villages in France, and the attractive village of Chateldon. Visit Orcival to see another impressive example of the local church architecture.

The Haute-Loire department of Auvergne is especially well known for the attractive pilgrimage town of Le Puy-en-Velay.

Le Puy en Velay itself is a lovely town to explore in the heart of the Auvergne region. Established since medieval times as an important pilgrim route, Le Puy has a very impressive selection of interesting historical monuments and is the most visited town in the Auvergne.

While at Le-Puy-en-Velay take the time to explore with side trips to Polignac and the Cascade de la Beaume, a picturesque small waterfall near Solignac.

For historical monuments we suggest you visit the town at Brioude to see the basilica, and La Chaise-Dieu to see the abbey.

The Allier river crosses the Haute-Loire department, and you can follow the Allier gorges as the river passes through some magnificent scenery.

There are several villages classified among the 'most beautiful villages in France' in Haute-Loire including Lavaudieu, Blesle, Arlempdes and Pradelles, each of them very worth visiting. You will also discover many other small villages as you explore the region.

The Allier department is less visited than some parts of the Auvergne but contains some noteworthy destinations if you are in the region, and is a taste of a France largely unchanged across the years

Towards the north of the department Moulins is the 'prefecture' town and visited in particular for its cathedral and you can also visit nearby Souvigny which has an important priory and churches.

Perhaps the best known town in Allier is Vichy, famous for being home to the Vichy Government during the Second World War.

The medieval centre of Montlucon to the west of the Allier department is particularly recommended to visitors, including the the Chateau des Ducs de Bourbon, and we also enjoyed a stroll around the 'most beautiful village' at Charroux about 20 kilometres north-west of Vichy.

The local cuisine of the Auvergne region is rich and flavoursome and based on local ingredients such as game from the hills and forests, various products based on the abundant chestnut trees, and beef and milk from the beautiful Salers cattle which are deep red in colour with long horns.

Of course you will also want to sample the delicious cheeses of the Auvergne such as the large round Cantal and Salars cheeses; the soft and creamy Saint-Nectaire and the delicious blue cheeses including the Fourme d'Ambert and Bleu d'Auvergne.

Follow the 'Route des Fromages AOC d'Auvergne' and you can taste the delicious local cheeses and visit the farm and cheese cellars. As an added bonus the route takes you through lots of beautiful countryside.

There are lots of local auberges offering good local food and regional specialities and quite a number of very good restaurants offering fine dining at prices considerably lower than many parts of France, so be sure to allow time to eat out when possible.

Map of Auvergne and places nearby