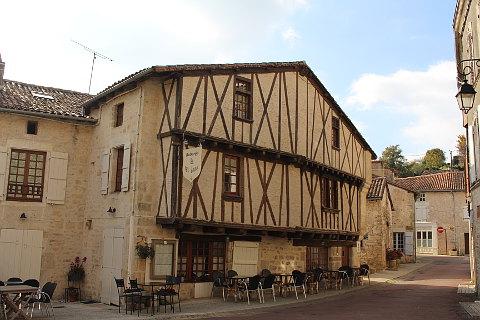 Nanteuil-en-Vallee is situated east of Ruffec in the north-west of the Charente department (Poitou-Charentes region) of France. It is listed as one of France's "petite cité de caractère' or 'small town of character'.

Nanteuil is an attractive village to explore, with a mix of traditional houses - mostly in stone and some half-timbered - dating back at least to the 12th century. Many of these have been renovated though there are enough that have not been touched to give the village an attractive authenticity. 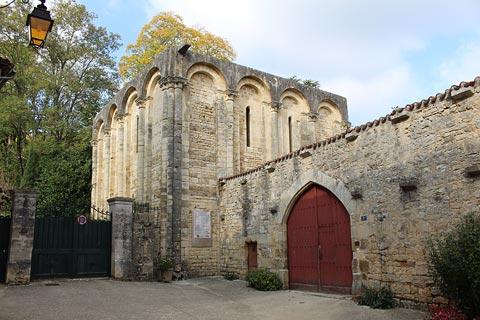 You can see a couple of interesting churches: the Church of Saint John the Baptist and the Church of Saint-John de Tusson, both 15th century. The main church, entered through a decorative stone doorway, is a well proportioned roman style structure containing a traditional baptismal font, some 15th century stalls and various carvings.

Behind the church up a side street is the Nanteuil Abbey and Treasury.

The impressive manor house (the Manoir de Aizecq) near the church dates from the 16th century (although with substantial 19th century modifications) while the traditional village washhouse and bread oven and a small stone fountain can also be seen in Nanteuil-en-Vallée. The fountain is dedicated to Saint Jean and was built for visitors and pilgrims alike. It was the main water source for the village until the 1960s.

Interestingly as you walk around the village you are very aware of the sound of water gushing down the hillside and under parts of the village.

A couple of Auberges added to the charms of Nanteuil-en-Vallee make this a popular spot for lunch or a pleasant place to come for a coffee and enjoy the sunshine.

France this Way comment: There is a very pretty arboretum and garden in the village which was created in the 1930s. A lovely spot for a stroll. The garden is on the banks of the river Argentor. 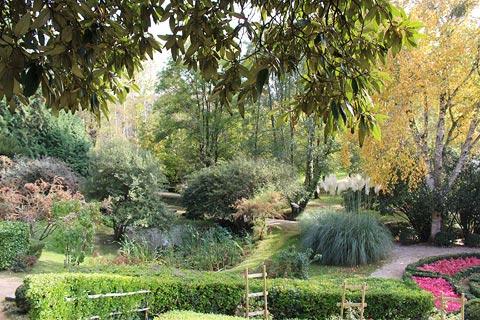 The remains of the 12th century benedictine Abbey of Notre-Dame de Nanteuil are the main monument in the village. This abbey was built on the site of an earlier, 8th century abbey, founded here by Charlemagne.

At one time a very substantial abbey, you can now see the sturdy Treasury building with walls inset with high arches. Although the building is called the treasury, its most likely historical use, it is apparently not completely certain that its original function was to store objects of value.

Little remains of the other main abbey buildings, but there are enough ruins to clearly see part of the original layout. Certain houses in Nanteuil-en-Vallee feature surprisingly ornate decorative features - some of these were sourced from the remains of the abbey.

The charming village of Verteil-sur-Charente with its imposing chateau and pretty riverside location is to the west of Nanteuil.

To the south-west there is another castle, which can be visited, in the quiet village of Bayers.

Map of Nanteuil-en-Vallee and places nearby

Visit near Nanteuil-en-Vallee with France This Way reviews

Plan your visit to Nanteuil-en-Vallee, Charente