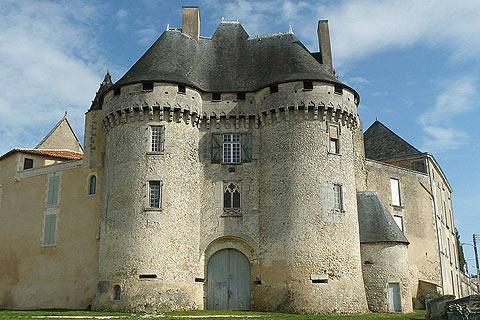 Barbezieux (full name Barbezieux-sur-Hilaire) is a town located south-west of Angouleme and in the south-west of the Charente department (Poitou-Charentes region) of France.

The town is best known for the Chateau de Barbezieux, an imposing 15th century castle. Although a substantial part of the castle was taken down in the 19th century the west side and the entrance between the two grand round towers remains and is especially notable. The castle has known many uses over the centuries, among them a prison, a girls school, and a hospital.

The castle now also houses the Barbezieux tourist office, a theatre (created in the original castle barn) and a small local museum of archaeology.

The other notable historical monument in Barbezieux is the Church of Saint-Mathias, in the heart of the old town and for many centuries an important pilgrimage destination due to the relics it contained, most notably of Saint Mathias.

The church is large and represents several architectural styles, having been built and altered over the course of several hundred years, from the 12th century to the 19th century. The beltower with its open arches and inset statues is perhaps the highlight.

After enjoying the 'important' sights in Barbezieux be sure to take a stroll around the old town to admire the local style white-stone buildings which cluster in the shadow of the church.

If possible you might like to plan your visit for one of the two market days in Barbezieux, Tuesday and Friday.

Note: photo of Barbezieux is copyright.

Most of the villages close to Barbezieux are traditional small Charentaise villages, with no major monuments although several have very impressive roman style churches.

Further afield, Cognac to the north of here has a very attractive historic centre and Angouleme is also a pleasure to visit.

Map of Barbezieux and places nearby

Visit near Barbezieux with France This Way reviews

Plan your visit to Barbezieux, Charente

Regular market(s) are held in Barbezieux each Tuesday & Saturday & Friday. (Markets are held in the morning unless stated.)

The French version of this page is at Barbezieux (Francais)