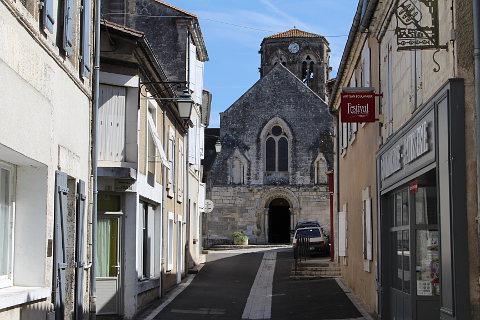 Mouthiers-sur-Boeme is a village to the south of Angouleme in the Charente department of France (Poitou-Charentes region).

France This Way comment: Mouthiers-sur-Boeme is a scenic village with a few notable highlights to discover, in a location that has been inhabited since neolithic times.

One of the historic monuments in the village is the Church of Saint Hilaire, an attractive roman style church that dates from the 12th century and is notable for its hexagonal tower with stone arched openings 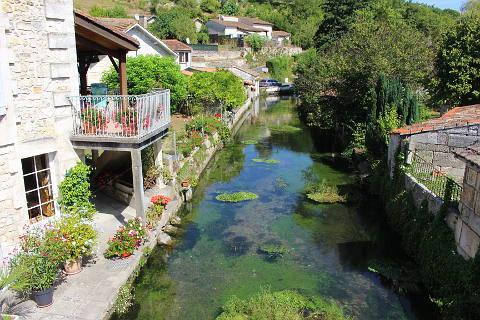 The second imposing building is the Chateau de la Rochandry, a scenic castle of quite recent construction: it dates largely from the 19th century, at which time it was built on the site of a much older castle.

The traditional washhouses on the river can also be seen. These were moved to their current location in the 19th century, when the course of the Boeme river was disrupted by the construction of the railway viaduct in 1840-1850.

A more recent addition to the heritage of the village is the roundabout called 'peuplier major' which features a recent bronze statue of three horses on a rock. On the side of the rock is a copy of the engraving from the cave at Chaire a Calvin*.

* There is a prehistoric cave in a cliff at Mouthiers-sur-Boeme called Chaire a Calvin with an engraving of a cow and horses dating back about 20,000 years.

The 15th century Logis de Forge and the surrounding 18th century hamlet has in the past been a flour mill, an iron mill and a walnut oil mill. Surrounding a large pond the logis is now home to a contemporary garden which has been classed as a 'Remarkable garden' of France. Water has a large influence in the garden and there are various ponds and water channels at the centre of the planting. 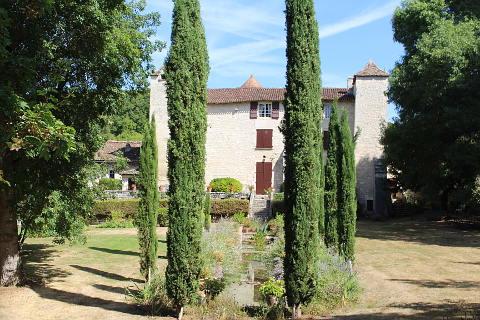 The quiet countryside around the town contains several peaceful villages where it is pleasant to take a stroll and enthusiasts of roman style architecture will discover numerous picturesque churches in the hamlets and villages of the region.

Charmant and Villebois-Lavalette are both close by and pleasant to visit if you have the time and inclination for a quiet exploration.

Map of Mouthiers-sur-Boeme and places nearby

Visit near Mouthiers-sur-Boeme with France This Way reviews

Plan your visit to Mouthiers-sur-Boeme, Charente