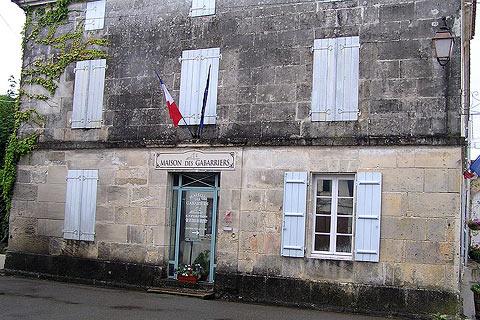 The village of Saint-Simon is centrally situated between Cognac and Angouleme in the Charente department (Poitou-Charentes region) of France.

Spread out along the Charente river, Saint-Simon developed around the river itself and the related trades that carried out their business on the river, transporting salt, wood, paper, military equipment etc. The village had a thriving port until the 19th century, after which time the railways gained importance as the main transport system.

It is still the river that attracts visitors to Saint-Simon, although it is hard now to imagine that until 200 years ago it was a major port. After taking a stroll along the river banks you can learn more of the important history of the Charente River and also Saint-Simon itself in the 18th century 'Maison des Gabarriers'.

During the summer months it is possible to take a trip along the river on a traditional boat, known as a 'gabarre' - these were also constructed in the village during several centuries. A nice way to see the village, work areas and the surrounding countryside the trip takes about an hour and is open May to October. See Village Gabarrier for details.

Apart from the Charente river and quais, other highlights include the centre of the village itself, the 12th century roman style Church of Saint-Sigismond and the entrance to the cemetery.

One small but interesting feature in the centre of Saint-Simon is the doorway with the sign of the 'Calfut' worker: calfut was the technique of pressing fibres into the gaps between the wooden boards of a ship before painting it with tar, to make a ship as watertight as possible. This doorway dates from 1602, and nearby you can see the 'Enseigne de Jean Brian', with the symbol for the same trade but dating from the 12th century.

Visit also the nearby hamlet of Juac to see the lock and the site of the traditional boat-building workshops: Juac is only a few hundred metres along the river to the west from Saint-Simon and a pleasant stroll to get here. Also in Juac you can see the remarkable 'Wall of the Gabarriers' where shipowners carved graffiti in the stone wall in the 18th and 19th century, with many detailed pictures of ships etc.

Enthusiasts of roman architecture and churches will find several other examples near to Saint-Simon in Charente, at Saint-Brice, Gimeux and Gensac-la-Pallue to the west of here and several others to the east (Trois-Palis, La Couronne, Roullet-Saint-Estephe and others).

Map of Saint-Simon and places nearby

Visit near Saint-Simon with France This Way reviews

Plan your visit to Saint-Simon, Charente

The French version of this page is at Saint-Simon (Francais)