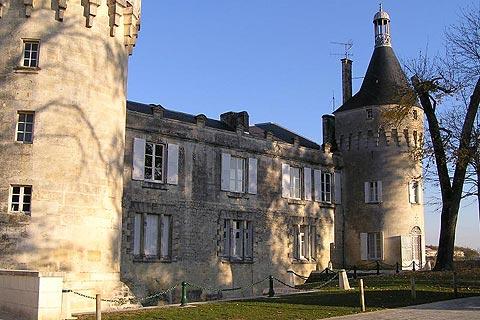 The town of Jonzac is situated at the southern end of the Charente-Maritime department between Saintes (40km north) and Bordeaux (70km south). With a history dating back at least to the ancient romans, the town has in recent decades reinvented itself as a popular spa and leisure centre.

Away from the spa there are also some interesting buildings in Jonzac based around its lively town centre.

Jonzac is best known for being a spa town, and although the spa waters were first discovered only 30 years ago, several thousand visitors a year now visit to receive the therapeutic benefits of the water from the thermal springs.

The most notable building in the town is the Chateau de Jonzac. The chateau was built in the 15th century on the site of an earlier castle that had been destroyed during the Hundred Years War. Extensive changes were made during the 19th century, part of the original castle demolished, and the moat filled in, but significant parts of the medieval castle remain including the two main round towers and several other interesting architectural details.

Still in active use, the chateau now houses the town hall and also an archaeology museum (in the cloisters).

The Church of Saint-Gervais-Saint-Protais is a 12th century roman style church with an attractive facade and a nicely proportioned belltower, while another religious monument in Jonzac is the Convent of the Carmes (16th century, now home to a cultural centre).

Elsewhere in Jonzac there are some smaller highlights to discover, such as the medieval houses in the 'Rue James-Scalfert', in the historic part of Jonzac and a gateway through a small remaining part of the towns original defensive ramparts.

The 19th century is best represented by the market hall in Jonzac centre, with a structure based on a metal framework (as popularised at that time by the Eiffel Tower).

Map of Jonzac and places nearby

Visit near Jonzac with France This Way reviews

Jonzac is classified as a recommended detour town (plus beau detour)

Plan your visit to Jonzac, Charente-Maritime

Regular market(s) are held in Jonzac each Tuesday & Saturday. (Markets are held in the morning unless stated.)

The French version of this page is at Jonzac (Francais)