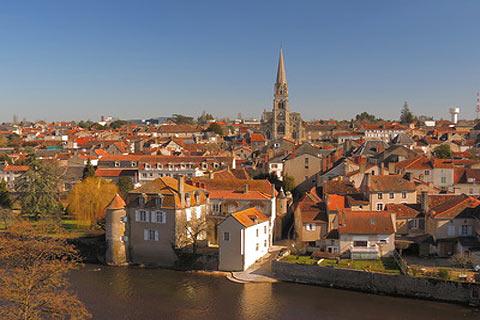 The small town of Montmorillon is towards the west of the Vienne department (which is itself in the western Poitou-Charentes region), in the gently rolling countryside about 45 kilometres east of Poitiers. Montmorillon is now classed as a 'Town of Art and History' to reflect its focus on preserving its historical heritage.

It is the centre of the historic town along the banks of the Gartempe river where the town is most attractive and where your visit will be centred.

The first site you will see here is the old bridge across the river, dating in part from the 15th century. Of the three arches that made up the original bridge only the central one now remains, with the outer two having been rebuilt in a more modern style in the 19th century. 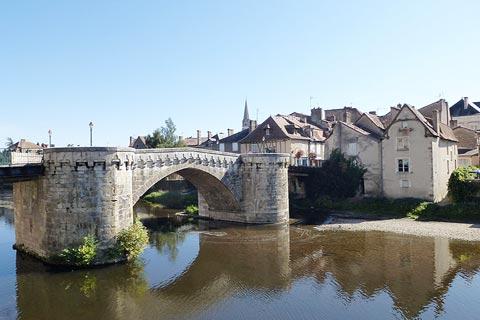 Rather unfortunate, but the remaining section is quite monumental and makes the stretch of river here very attractive, and there are very pretty views in both directions from the bridge itself. Close to the bridge you can also take a stroll around the nicely maintained gardens in Place Medina del Campo.

The old town of Montmorillon extends to both sides of the river so be sure to explore both! The best views are from the left bank, with nice views across the river and bridge to the town with the Church of Notre-Dame on the hill behind. Note also the curious tower built on a rocky outcrop that you can see from here. Built on the site of an ancient castle, the tower overlooks the town and has a large statue of the Virgin on top.

Among the sites here there are several substantial townhouses of interest, typically dating from the 17th and 18th centuries. These are not open to the public but can be admired from outside. The Hotel de Moussac is the most impressive among them.

Another grand building is the 15th century Vieux Palais on the banks of the river. It is easily recognisable by the round tower on one side. Unfortunately the Vieux Palais is not often open to the public so we can't tell you what is like inside!

There are several churches of interest in Montmorillon including: 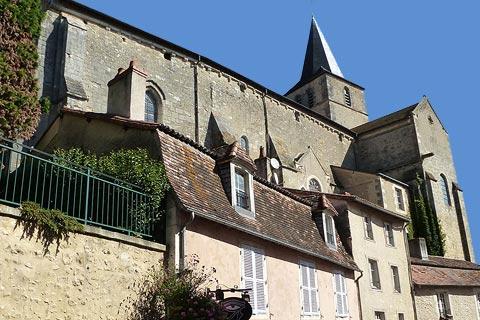 One of our favourite monuments in Montmorillon is much smaller and simpler, and is a small chapel dating from the 11th century called the 'Octogone de Montmorillon'. As well as its unusual eight-sided shape, the chapel has remained much of its medieval character despite renovations in the 17th, 18th and also the 20th century.

Features of the chapel include inset stone arches and a large number of medieval stone sculptures both inside and outside the chapel, which are quite evocative although not in the best condition. The campanile on the top is a relatively recent addition.

Note: eight sided cemetery chapels and baptism chapels were relatively common in early Christianity, since eight represented the seven days of creation and the day of eternal rest that followed.

The Chapel of Saint-Laurent and the Octagone are both part of the Maison-Dieu, a medieval monastery-hospital complex that also includes several other of the early monastery buildings such as a 17th century barn with impressive carpentry work and a curious building called the chauffoir - this was the only part of the complex that was heated and allowed pilgrims to escape from the cold for a while. The terraced gardens of the Maison-Dieu are also pleasant and have nice views across the town.

Note: photos by martpan are copyright

During the last few years Montmorillon has gained a reputation as being a town that attracts book enthusiasts, and as you explore the old town you can hardly miss the large number of bookshops and artisan studios for related topics such as calligraphy. These sometimes also hold interesting exhibitions - we saw one about early printing techniques - and workshops for those who would like to learn more about the trades involved.

Just a few kilometres south-east from Montmorillon, Lalande Castle has a lot in common with the castles we more often associate with the Loire Valley: originally a medieval defensive castle, it was transformed in the renaissance period to become a castle that was comfortable for living in, and surrounded by extensive parkland. The castle is only open to visitors in July and the first half of August.

Among the most interesting places to visit nearby is the abbey at Saint-Savin-sur-Gartempe to the north of Montmorillon.

Map of Montmorillon and places nearby

Visit near Montmorillon with France This Way reviews

Montmorillon is classified as a listed town of Art and History

Plan your visit to Montmorillon, Vienne

Regular market(s) are held in Montmorillon each Wednesday. (Markets are held in the morning unless stated.)

The French version of this page is at Montmorillon (Francais)