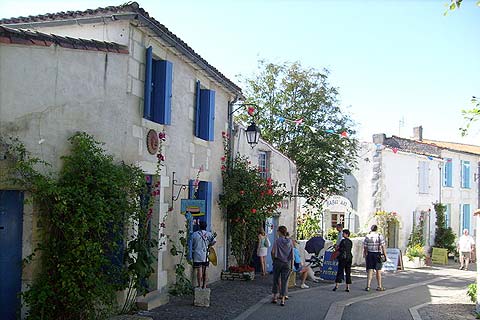 Mornac-sur-Seudre is in a slightly raised position above the banks of the Seudre River to the north of Royan in the Charente-Maritime department of western France where it forms part of the Arvert peninsula. The village focusses on oyster and salt production, and nowadays also on tourism.

Mornac is classified as one of the 'most beautiful villages of France', and has a picturesque medieval centre with narrow streets lined with ancient houses, whitewashed and typical of the local Charentais style that you see all along this section of coast. The main sights that you will want to see within the village are:

- the roman style Church of Saint-Pierre is a fortified church dating from the 11th century - be sure to go up the belltower for nice views across the village rooftops (the church lost its spire during the Second World War).

- the medieval market hall (in the square next to the church)

- the port area of the Seudre River in Mornac, a pleasant place for a stroll on a sunny afternoon to see the small fishing boats and the cabins belonging to the oyster farmers

- the remains of a chateau that once dominated the village

You will also find lots of small 'arty' type shops (potteries, art galleries etc) in Mornac-sur-Seudre and a good selection of restaurants on the Rue du Port and other the streets between the church and the port

The surrounding region contains the characteristic landscapes of this part of France, with small woodlands, open agricultural areas, and salt-marshes and tourism is largely focussed on the opportunities to explore these diverse landscapes. Following the signposted walk across the salt marshes from Mornac is recommended.

Exploring on foot or by bike are a popular way to enjoy the peaceful environment, or perhaps take a ride on the small tourist Train des Mouettes, a 19th century steam train that operates between La Tremblade and Saujon, stopping at Mornac (and Chaillevette) on the way. Boat trips along the Seudre river are also available in the village.

Another listed 'most beautiful village' can be seen at Talmont about 20 kilomtres to the south of Mornac-sur-Seudre, on the Gironde estuary.

Map of Mornac-sur-Seudre and places nearby

Visit near Mornac-sur-Seudre with France This Way reviews

Plan your visit to Mornac-sur-Seudre, Charente-Maritime