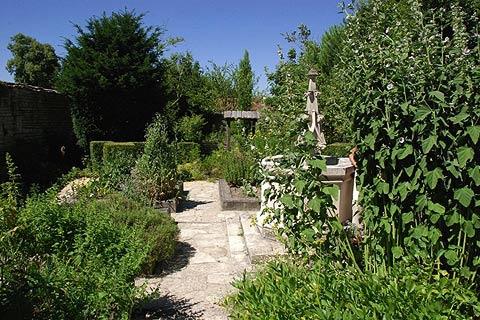 Tusson is a village situated north of Angouleme and to the north-west part of the Charente department of Poitou-Charentes. it falls on one of the less common pilgrim paths, that travel from Tours to Santiago de Compostella.

A typical Charentais village, Tusson originally developed in early medieval times around the abbey that once stood here.

There are many attractive houses to admire from the renaissance period, with the house that once belonged to Marguerite d'Angouleme the most important - the building now houses the Maison du Patrimoine in Tusson, a small museum dedicated to local heritage.

Next to the Maison du Patrimoine you can visit the main attraction in the village, the 'medieval garden', or 'Monastic Garden of Tusson', created by a local group of enthusiasts who have set out to recreate as accurately as possible what a medieval garden would have been like.

Officially listed as one of France's 'remarkable gardens', the garden features four separate garden areas dedicated to vegetables, medicinal plants, fruits and ornamental plants. Interesting stone features such as a fountain and some ancient tombs also add to the appeal of the garden. The garden is closed in January, and an admission charge of three euros is payable.

From the garden you can also see a section of wall with a doorway that is all that remains of the original priory in Tusson.

Motivated perhaps by the medieval garden, the village also contains many individual gardens that can be seen clambering over walls and fences and show that the whole of Tusson take gardening very seriously!

Among other notable buildings are the 16th century Maison Pasquier and the Ferme robert (both in private ownership) and the gothic style Church of Saint-Jacques. The church, with its octagonal belltower, was originally built in the 13th century but suffered a great deal of damage during the Wars of Religion and was largely rebuilt in the 15th century.

There are several other small villages nearby that, like Tusson, will not take you long to explore but together make for an interesting tour of this part of Charente, including Verteuil-sur-Charente with its castle and the villages of Ruffec and Nanteuil-en-Vallée.

Map of Tusson and places nearby

Visit near Tusson with France This Way reviews

Plan your visit to Tusson, Charente

The French version of this page is at Tusson (Francais)