Rochefort is a town on the Atlantic Coast to the south-east of La Rochelle and in the Charente-Maritime department of the Poitou-Charentes.

The town developed around its military harbour when Louis XIV, in the 17th century, had an important naval base built here on what was previously a region of swamps and marshes. It was the naval base and the resulting wealth it brought to Rochefort that shaped much of the architecture that you will see when you visit.

The area of Rochefort around the harbour and the associated naval buildings was planned as a 'new town', with a grid of straight streets and a large central square. The straight lines of houses remain much as they were originally laid out, and most of the houses in this part of Rochefort are also the original 17th - 19th century properties. 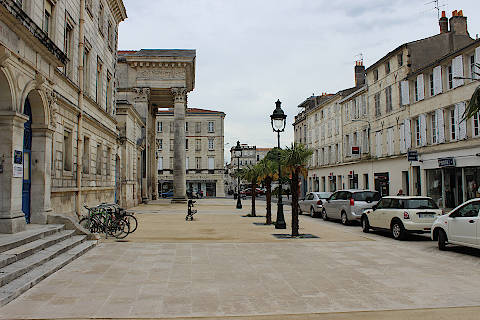 The houses are typically built in the local white stone and often have interesting features such as decorative entrances or balconies.

The layout was designed by a certain M Bégon, who also gave his name to the Begonia flower...

A short distance east of here along Rue Audry de Puyravault you can see the imposing classical facade of the Church of Saint-Louis.

The Arsenal and Corderie of Rochefort

A short distance east of here, the large 17th century buildings that include the arsenal and the corderie are on the banks of the Charente river. Over the centuries several hundred ships were constructed here as the French Empire established its territories and protected its interests at sea.

The main buildings of the corderie have been fully renovated as a tourist attraction in recent years, although they can only hint at what the harbour area must have been like when it was a thriving centre for shipbuilding. These buildings are the principal sight in Rochefort and the ensemble of buildings is now a listed Historic Monument. The main parts to the site are:

- The Corderie Royale, a very long building built in 1670 that was once the centre of the docks in the town and also the centre of ropemaking for ships across France, until ropes on ships were finally replaced by chains. At the corderie you can learn about the history of the site and also about the techniques involved in ropemaking

- The arsenal and the port of Rochefort itself, which was a very important location for making naval warships from 1690 until the 19th century. The buildings provide an elegant backdrop to the attractive harbour which is now used as a pleasure port

- Le Chantier d'Hermione, where a splendid 18th century ship, the Hermione, is being meticulously recreated and where you can see the impressive work in progress. The 'original' Hermione set off in 1780 for America, carrying Lafayette en route to help the Americans in their struggle for independence.

- The gardens around the buildings have also been restored and although mostly laid to lawn there are also areas which are planted with flowers and trees, and a small potager area. 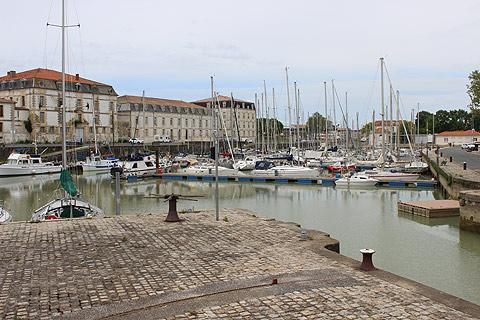 The largest maket in the region is found in the market halls of Rochefort and along the Avenue Charles-de-Gaulle every Tuesday, Thursday and Saturday morning.

A Marine Museum in the town explains more of the history of how Rochefort developed - it is situated in the Hôtel de Cheusses and the Hôtel de la Marquise d’Amblimont.

You will also explore a stroll around the Jardin des Retours and enthusiasts of the work of Pierre Loti - the 19th century French author who wrote books about his life at sea - can visit his house at Rochefort, now a Museum dedicated to the writer.

The town also has an important thermal spa centre.

To explore the region around the town, you can follow a path for several kilometres along the banks of the Charente river. There are other paths that enable you to explore the unique natural environment of the marshes near Rochefort.

Map of Rochefort and places nearby

Visit near Rochefort with France This Way reviews

Rochefort is classified as a listed town of Art and History

Plan your visit to Rochefort, Charente-Maritime

Regular market(s) are held in Rochefort each Tuesday and Thurday. (Markets are held in the morning unless stated.)

The French version of this page is at Rochefort (Francais)