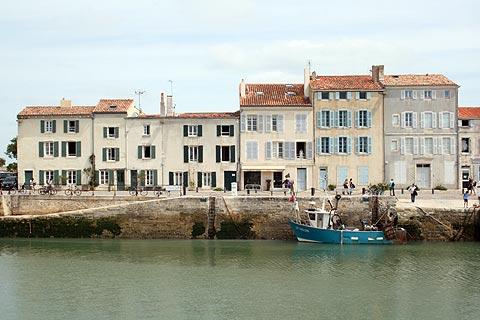 Ile de Ré is an island, reached by a long modern bridge, north of La Rochelle in the Charente-Maritime department. Quite a large island - about 30 kilometres long - Ile de Ré is a very popular holiday destination on this sunny coast of western France.

Ile-de-Ré is a very different experience for visitors in high-season - when tourists far outnumber residents - and off-season when the island reverts to its traditional activities of salt and oyster production. The island principally attracts families looking to relax in a peaceful environment where the children will enjoy themselves on the sandy beaches and there are picturesque villages for the adults to explore. 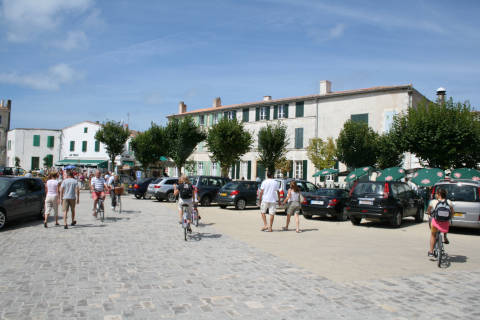 To reach Ile-de-Ré you need to cross the toll bridge from just north-west of La Rochelle, which is quite expensive, so you might find you stay on the island more than you expected after you have arrived! All facilities are available on the island including supermarkets and petrol stations and many holidaymakers never feel the need to leave the island at all during a visit.

Ile-de-Ré has lovely beaches, especially along the southern and western coast. The most popular beaches are in the area between Le Bois-Plage and La Couarde in the centre of the southern coast and along the stretch of coast between Saint-Clément-des-Baleines and Les Portes-en-Ré to the north-west.

- The central part of the island around Le Bois-Plage is closer to the principal village of Saint-Martin-de-Ré, so it is easy to pop across for an ice cream in the harbour from here! Le Bois-Plage-en-Ré is also the principal holiday resort on Ile-de-Ré, has a lively market and an attractive setting partly backed by pine forests.

- The beach at Saint-Clément-des-Baleines is a lovely sandy beach and popular with surfers, but is rather slower to get to. Well worth visiting at least once during your stay here!

There are also two of the 'most beautiful villages of France' on the island at Ars-en-Ré (to the west of Ile-de-Ré) and La Flotte-en-Ré (to the east). Other villages to discover on Ile-de-Ré include:

Other sights on the island, apart from the appeal of the natural environment and beaches, include one of the tallest lighthouses in France at the western tip (the Phare des Baleines, built by Vauban in the 17th century) that can be climbed for far-reaching views out to sea and back across the island itself.

You can also see the ruins of an abbey (the Abbaye des Châteliers) in the south-east near La-Flotte-en-Ré.

Another unusual experience also presents itself - you can explore the salt marshes of the north around Loix by canoe to better appreciate the unusual environment that Ile-de-Ré offers. 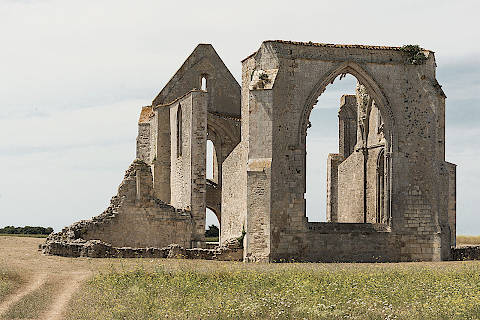 Note however that these cycle paths are very busy with leisure cyclists and are not ideal for 'serious' road bike cyclists - and the roads are rather congested with cars, especially during the peak summer months.

Note: we also saw lots of cars arriving carrying bikes and being stopped by police - be sure your bikes are loaded correctly on your car eg not obstructing the number plates if you don't want to be stopped and forced to unload your car just before you get to your destination!

Many other water sports and boat-trips are also available.

Although the Ile-de-Ré itself has all you need for your visit we strongly recommend that you spend a day at La Rochelle, just across the bridge from the island. It is a large town with a great deal of historical interest, a lovely harbour, a popular pedestrianised centre and one of our favourite towns in France!

Map of Ile de Re and places nearby

Visit near Ile de Re with France This Way reviews

Plan your visit to Ile de Re, Charente-Maritime