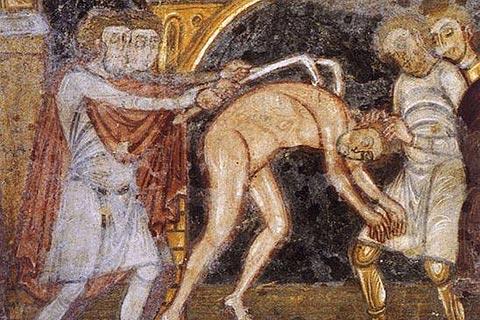 Although it is the abbey that attracts visitors here, and that dominates the centre of the village, you will also want to have a walk around the historic centre of Saint-Savin-sur-Gartempe. The town is on the scenic banks of the Gartempe river, which is crossed here by a 13th century stone bridge as well as a second bridge added in the 19th century. Hint: the best view of the river and old bridge is from the new bridge!

You can also see some parts of the towers and walls that once protected the centre of Saint-Savin-sur-Gartempe, on Rue des Tanneries and Rue des Murailles. 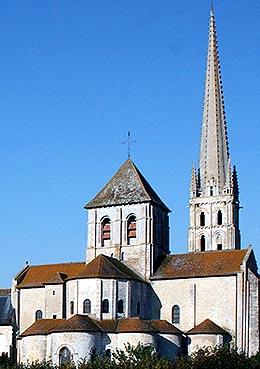 Not all parts of the abbey complex are so ancient - the associated abbey buildings were very damaged in the Wars of Religion and reconstructed in the 17th century in the classical style of architecture, while the church spire was added in the 15th century.

The round tower (on the logis), although of medieval appearance, was added in the 19th century as a device for supplying water to the rooms of the buildings.

Inside the church, you will first be struck by the large size of the church (it is more than 40 metres long) and the sweeping semi-circle of columns around the choir lit by the windows that surround it, and the ornately carved capital stones, mostly representing plants and animals.

Your eyes will soon be attracted to the large number of murals that also date from the 11th-12th centuries and cover several hundred square metres of the interior surface.

The murals are extremely well preserved (they were restored in the 19th century) and depict numerous biblical stories from the Old Testament, mostly from the books of Genesis and Exodus such as the creation of Eve, the story of Cain and Abel, and the story of Noah and the Arc, the building of the Tower of Babel and the crossing of the Red Sea.

Saint-Savin-sur-Gartempe abbey is listed as a UNESCO world Heritage sites.

If you want to see more murals in the region, Saint-Savin-sur-Gartempe tourist office can provide a suggested route that will pass by 12 other sites in the Gartempe valley. The abbey is on a route designated the 'Valley of Frescoes' between Saint-Savin and Saulgé which follows the Gartempe River and includes several important frescoed buildingssuch as those at Antigny, Montmorillon and Saint-Germain.

You will certainly also want to visit the pretty village of Angles-sur-l'Anglin, about 20 kilometres north of Saint-Savin-sur-Gartempe.

Map of Saint-Savin-sur-Gartempe and places nearby

Visit near Saint-Savin-sur-Gartempe with France This Way reviews

Plan your visit to Saint-Savin-sur-Gartempe, Vienne