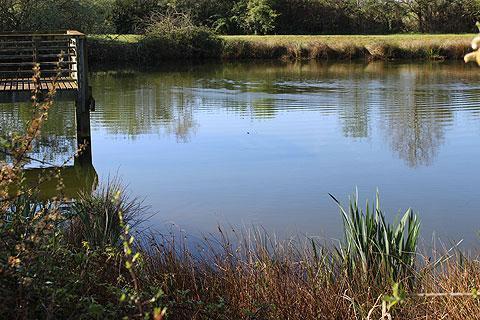 The Brenne Regional Natural Park is a picturesque region in the south-west of the Indre department of central France, in the Centre region and along the valley of the Creuse river. Before you start exploring the Brenne you can find information at the Maison du Parc at Bouchet near Rosnay.

There is also a natural region called Brenne which covers much of the same territory. The Natural Park also includes some of the surrounding region that is within the natural areas called Boischaut Nord and Boischaut Sud. 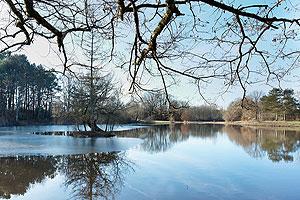 The scenery across the parc is quite varied, but it is for the flat central region of fields, marshes, ponds and hedgerows that it is best known, as seen in the area between Rosnay and Mezières-en-Brenne.

Although the small lakes appear very natural today, in fact they are all man-made - a process that started with the development of the Brenne by 12th century monks. This development continues today, with many of the lakes now used as fish farms.

The region is very well known for its wildlife, both fauna and flora. Although many of these are small such as lizards, water based plants and orchids the area is also rich in larger animals such as deers and wild boars and the protected environent attracts a wide range of birds.

If you are interested in exploring this environment we suggest you visit the Maison de la Nature et de la Reserve, next to a lake about four kilometres south of Mezières-en-Brenne, to learn more.

The most pretty towns in the region include the historic centres of Le Blanc and Saint-Gaultier, both enhanced by their position on the banks of the Creuse river.

Although the Brenne is not well known for its historic monuments there are actually a good number of castles and churches to visit nearby. 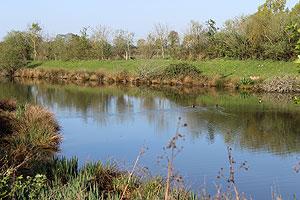 Among the most popular castles are the Chateau Guillame at Lignac and the Chateau du Bouchet at Rosnay, as well as the Chateau d'Azay-le-Ferron which is surrounded by lovely gardens.

Apart from the Abbey of Notre-Dame at Fontgombault most of the religious monuments you will see are small village churches, such as the 12th century church and lanterne des morts at Ciron while other favourites include the Abbey Church at Meobecq and the priory which enhances the riverside view at Saint-Gaultier..

Note: a small pyramid shaped goats cheese is produced in the region. Called the Pouligny-Saint-Pierre we highly recommend you taste it when in the region!

Although it is possible to enjoy the parc from your car, a much better way to see the environment and to hear the birds and insects is by exploring on foot or by bike. The parc have marked numerous walks through the region varying in length from just a few kilometres to more than 20 kilometres.

A short distance east of Mezières-en-Brenne, Bellebouche Lake is one of the largest in the region and also one of the most developed for visitors.

Bellebouche is particularly well known for its lake beaches (nearly a kilometre long) and swimming and also has many other recreation opportunities such as short nature trails and children's play areas as well as a snack bar.

There is a large and varied choice of cycle routes. Apart from those in the south-east and south-west of the parc, where the terrain becomes more hilly, these are all on quite flat terrain and easy for all the family. These vary from a short 11 kilometre ride starting from the Maison du Parc to rides of 50 kilometres of more, and include both routes on roads and mountain bike routes, so there is something for everyone...

We first discovered the Brenne when we were looking for a stopover place to visit on the journey south along the motorway from Orleans and the Loire Valley towards the south of France. Even if you are not staying in this area we recommend you make a detour to see the environment. The Parc is easily accessible from the motorway, and is just to the west of Chateauroux.

Map of Brenne Regional Natural Park and places nearby