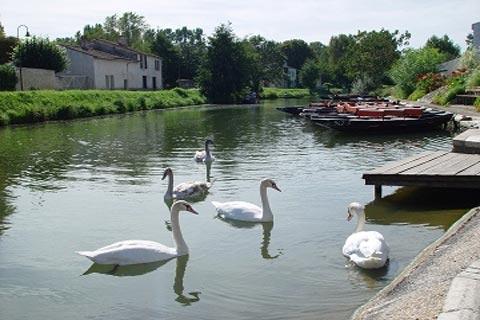 Coulon is in the Deux-Sevres department, west of Niort and at the centre of the Marais-Poitevin region. The waterside town lies on the banks of the Sèvre and has appointed itself 'capital of Green Venice' with some justification.

Coulon is well placed to explore the marshy region around the village and is also now listed as one of the most beautiful villages of France.

The region around Coulon has been inhabited a very long time and neolithic remains, bronze age items, and roman relics have all been found close by. However the village as we see it today 'only' dates back some 1200 years. 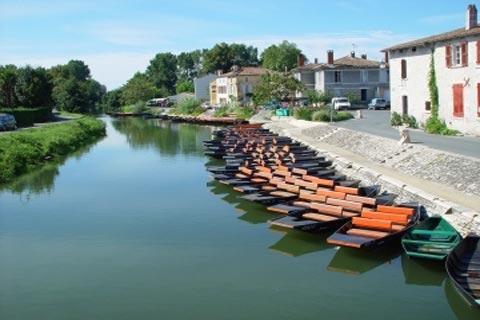 For a long time the village played an important role because of its position as a transport link on the river, with salt being a particularly important commodity. This role diminished after the railways came to dominate transportation in the region.

Coulon today is a pleasant town alongside the river, so take time for a wander around the town before heading off into the marshes.

In the Place de la Coutume you can see the Maison du Marais Poitevin, established in the old customs house (businesses operating on the river used to have to pay custom taxes which were then used to maintain the waterways) and now the tourist information centre for the region as well as an Ecomuseum. This is quite an extensive and useful centre about the region, its history and environment so a good place to start exploring around Coulon.

After taking a stroll along the quais you can visit the Church of Saint-Trinity,. The church was originally established here in 830 but was rebuilt several times, the most recent being in the the 17th century after the earlier church was destroyed in a fire. One unusual feature of the church is the raised sheltered porch on the south side: the reason for this addition is unknown.

Coulon has paid a lot of attention to detail, for example in the colourful shutters used by several of the houses, which also adds to the appeal of a visit. 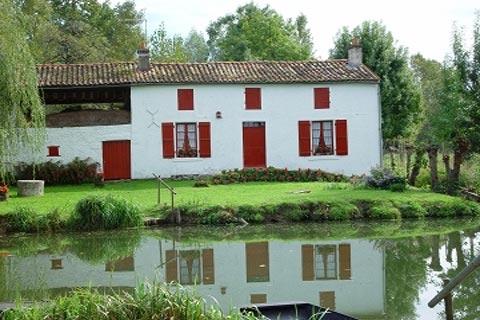 Most visits will incorporate Coulon as part of a tour of the Marais Poitevin and the village is a popular starting point for those hiring boats to venture into the peaceful marshes: boats can be hired from Quai Louis Tardy. For more details about activities and attractions in the region see details at Marais-Poitevin.

Map of Coulon and places nearby

Visit near Coulon with France This Way reviews

Plan your visit to Coulon, Deux-Sevres

The French version of this page is at Coulon (Francais)