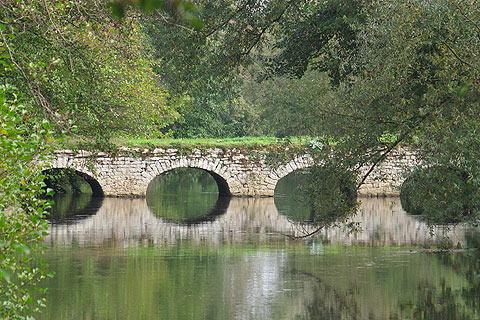 Niort is a large town situated on the Sèvre river about half way between Poitiers and La Rochelle in the Poitou-Charentes region of western France.

Niort has an interesting historical centre, with houses dating from the medieval and renaissance eras and also several monuments of interest to discover, as well as a substantial amount of more recent development - it is an important centre for local business and finance in this region of France.

The old and new parts of central Niort are separated by the large Place de la Breche. It is the historical centre that is of interest to visitors. Start your visit perhaps with a stroll across the bridge in the centre of Niort, which gives nice views across the town and the church as well as the donjon. 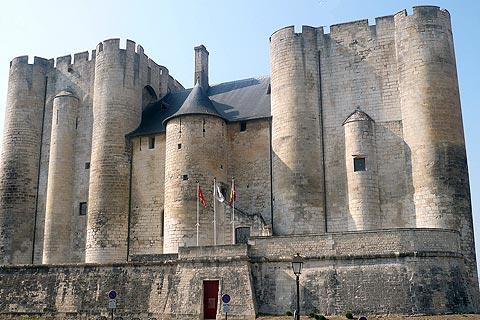 The Donjon, on the river banks in Niort, is a major part of a medieval castle and the most important monument in Niort that dominates the town centre. In part the donjon dates from the 12th century, when it was built in the roman style by Henry II (Henry Plantagenet) and Richard the Lionheart, and is one of the largest castles from this period that remains in France.

The building includes two adjacent donjons separated by a logis: the two donjons are similar in design but one is a few metres taller than the other, both have round towers in each corner. The views across Niort from the donjon terraces are a highlight of a visit, and there is also a Museum of Ethnology and Archaeology to visit in the building.

On an island in the river just across from the donjon you can see Fort Foucault, the tower of which is the remains of a 12th century castle.

The Pilori is an interesting renaissance style building dating from the 14th century that was once the town hall for Niort. The building takes its name from the pillory that previously stood here. The whole building, in particular around the doors and windows, features decorative stonework. The pilori is now used as an exhibition center for local artists.

There are several churches in Niort of which the most important is the Church of Notre-Dame, built in the gothic style in the 14th-16th centuries. The tall spire of the church makes it the tallest building in the Deux-Sevres department.

The Town hall in Niort is an imposing neo-renaissance style building with a large central campanile built at the end of the 19th century.

The 19th century market hall, a large structure built in the glass and steel design that was popular at the time (1869). It is one of the most impressive market halls of this type in France, and the market itself has a very extensive range of fresh produce available. Markets are held here every day except Monday with those on Thursday, Saturday and Sunday being the largest. 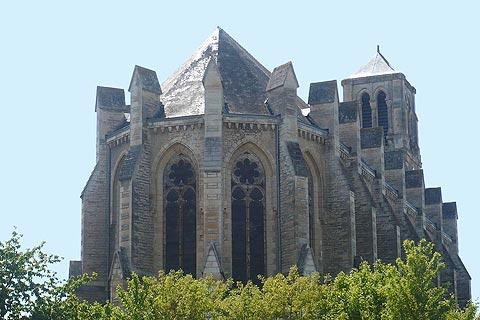 Elsewhere as you explore Niort old town you will see several half-timbered houses dating from the 15th and 16th centuries. The Maison de la Vierge is particularly interesting because it has a statue of the Virgin and child in one corner.

Next to te Niort Tourist Office on Rue Brisson you will enjoy exploring the many arts and craft shops along the Quai des Arts. If you are looking for presents to take away with you this is the place to find them!

Photos of Niort by chtiogabz are copyright.

The footpath along the banks of the Sèvre river in the town centre and towards the Marais Poitevin is a popular place for walking, jogging and fishing.

Niort is a popular base for exploring the unusual canals and marsh landscapes of the Marais Poitevin.

Map of Niort and places nearby

Visit near Niort with France This Way reviews

Plan your visit to Niort, Deux-Sevres

The French version of this page is at Niort (Francais)