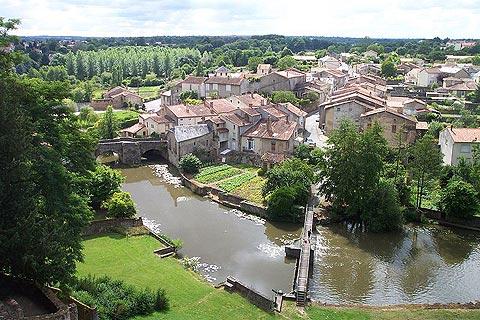 The town of Parthenay is situated on a meander in the Thouet river in the quiet countryside of the Deux-Sèvres department of Poitou-Charentes, to the west of Poitiers. Although many of the historical buildings in Parthenay have been lost over the centuries there remain sufficient historical clues to give you a feel for how the town might have been 500 years ago.

The historical centre of the town can still entered by one of the historic gateways through the town defences that were already admitting pilgrims to Parthenay in the middle ages. One of these is the large Porte Saint-Jacques, reached via a 13th century bridge across the slowly moving river and the other is the Porte de la Citadelle, also referred to as the clocktower. 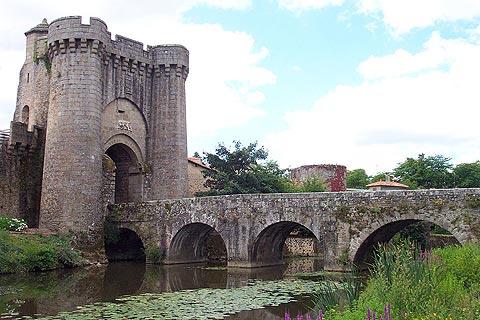 Note: 700 years ago Parthenay was a major stopping point for the 'pilgrims of Saint-Jacques' en-route for Santiago de Compostela in north-west Spain. This is why you will come across several place names such as 'Pont Saint-Jacques', 'Vau Saint-Jacques' and 'Saint-Jacques gully' when you visit the town.

Inside the gates of Parthenay you discover an attractive medieval town centre with half-timbered houses to be seen on some of the narrow streets: the Rue de la Vau-Saint-Jacques has the best preserved examples. Individual sights within the town include:

The Church of Sainte-Croix dates from the 12th century, although many changes have been made since, for example the belltower was added in the 15th century and the original facade was destroyed in the 18th century to allow the road to be widened.

Parthenay castle reminds us how important the town was as a regional centre in medieval times, although it is now in ruins with the lower parts of three castle towers and a section of ramparts along the river front being the principal parts remaining. Originally the castle was an impressive structure, built in the 11th century and further reinforced in the 13th and 15th centuries - at one time it had nine towers and thick walls encircling the living accommodation and stables.

The three parts you see when you visit the castle today are the Bastille de Richemont, added in the 15th century to provide additional reinforcements, and the two older towers - the Tour de la Poudriere (the most intact of the towers), and the Tour d'Harcourt (of which little now remains), both dating from the 13th century.

The roman style entrance door to the castle's Chapel of Notre-Dame-de-la-Couldre is still standing, although the remainder of the chapel was demolished after the revolution.

The Museum Georges Turpin is an interesting way to learn more about the history of Parthenay. 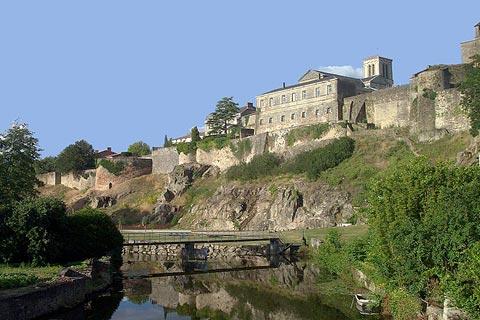 Photos of Parthenay by Chris J Wood and subject to copyright.

It is true that Parthenay is in a quiet region of countryside and most attractions involve some travelling. Popular places to visit include Thouars, about 40 kilometres to the north of the town and Poitiers, a similar distance to the east of Parthenay.

Map of Parthenay and places nearby

Visit near Parthenay with France This Way reviews

Plan your visit to Parthenay, Deux-Sevres

Regular market(s) are held in Parthenay each Wednesday all day. (Markets are held in the morning unless stated.)

The French version of this page is at Parthenay (Francais)