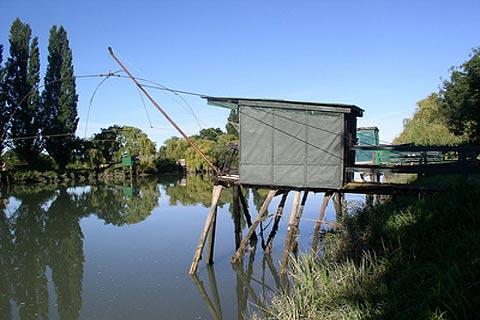 The small town of Saint-Savinien is in the Charente-Maritime department between Rochefort (to the north-west) and Saintes (to the south-east).

It is one of the most attractive towns in the region, principally because of its setting on a raised promontory on the banks of the Charente river - this is most unusual in this region of Charente-Maritime which is usually very flat.

Although there are few 'major monuments' here, Saint-Savinien is pleasant to visit with the river ever present and a picturesque old town of narrow streets waiting to be explored.

The most notable building is the Church of Saint-Savinien that dominates the skyline of the town. The church facade with its round arches is a good example of the roman style architecture in the region, and dates from the 12th century, while the clocktower was added later, in the 14th century.

Other religious monuments of note in the town include the small church that is all that remains of the Augustine Abbey that once stood here, and the small 12th century Church of Saint-Germain. While exploring the streets between the river and the church you will also come across the towers and high stone walls of the Chateau de la Cave.

Much the best views of Saint-Savinien are from the waterside, especially looking back at the town and church from along the opposite bank of the Charente, so be sure to allow time for a stroll along the river. Likewise, from above the town you can look down across the rooftops to the river below.

Crossing the bridge over the Charente you reach the Grenouillette Island, now home to a leisure complex and park with open air swimming-pool, tennis, restaurants and picnic areas, camping and fishing...

One water based attraction in this part of Saint-Savinen that is very popular, especially with children between about 9 and 13 years old, is the Port Miniature of Saint-Savinien. A 'fleet' of small boats has been established on a small lake in the style of classic ships such as paddle steamers, ferries and lifeboats. Children can operate these boats themselves (although children less than 9 years old need to be accompanied by adults), and a great time is had by all!

Map of Saint-Savinien and places nearby

Visit near Saint-Savinien with France This Way reviews

Plan your visit to Saint-Savinien, Charente-Maritime

The French version of this page is at Saint-Savinien (Francais)