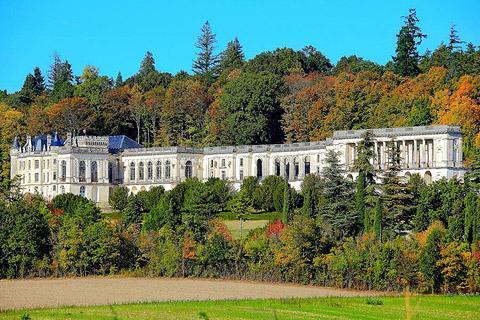 The Chateau de la Mercerie is in the commune of Magnac-lavalette-Villars in the Charente department, in the countryside around 25 kilomètres to the south of Angoulême.

When the brothers Raymond and Alphonse Réthoré arrived here in 1925 at the Manor of Mercerie in Magnac-Lavalette they had the intention to construct a castle and a museum attached to the 19th century manor house that was already on the site. 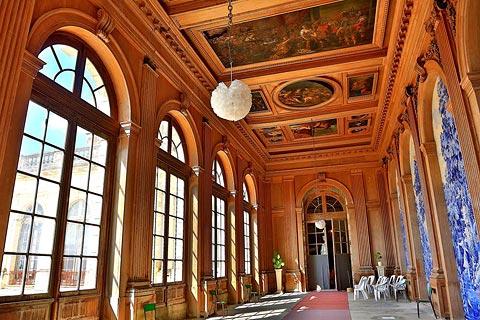 Construction of the castle began in 1939 with the Salle des Azulejos, parallel to and just behind the manor house and separated from it by a corridor. The construction was suspended during the war but then continued until 1975, finishing with the only facade in France to be classified and to have a length of 220 metres. It is sometimes referred to locally as the small Versailles Charentais.

Alphonse was the self-taught architect for the project and drew the plans and directed the construction. Raymond paid for it with the proceeds of an enterprise he ran that sold industrial washing wachines. Raymond also become maire of Magnac-Lavalette on six occasions, and also translated the writings of Charles de Gaulle into Russian.

After being abandoned for almost 30 years, in 2011 the Chateau de Mercerie began a programme of restoration thanks to the efforts of Didier Jobit, Maire of Magnac-Lavalette-Villars, and the Association of the Château de la Mercerie under Georges Mesnard.

During your guided visit you will discover this untypical place: 12 rooms can now be visited and you will pass from one discovery to the next until you reach the final room, the Salon de Béruges, with its surprising secret.

You can also visit the exterior of the castle with its parkland, reconstituted rose garden, an arboretum and the tomb of the Réthoré brothers.

Visits to the Chateau de la Mercerie take place from April to November, in French every afternoon, in English tuesday mornings, and in Dutch on thursday mornings. Groups can visit the castle all year round (note: the castle is not heated in winter). Phone number for the association is 07 89 63 03 57, Mr Georges Mesnard .

Access is possible for handicapped except for the two bedrooms upstairs. Parking is free for cars and light tourist vehicles, and camping cars can park overnight. 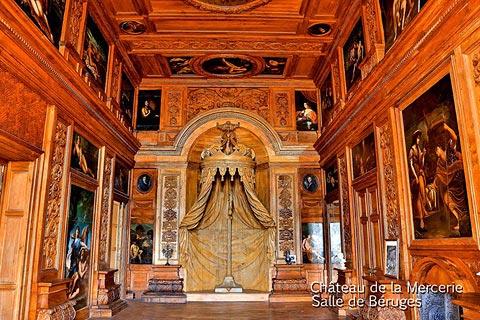 This region of the Charente is quiet and the countryside and small villages such as Charmant, Villebois-Lavalette and Mouthiers-sur-Boeme are the principal attractions (although none of these will detain you very long), as well as the various small churches to be found in villages nearby.

Visitors will also want to explore the more substantial town of Angoulême to the north of here, and we recommend you travel a bit further south-east to explore the lovely towns of Brantome and Perigueux.

See more castles in France. You can find more travel ideas in the Charente guide and the Poitou-Charentes guide.

Map of Chateau de la Mercerie and places nearby