Perigueux is an important town in the central part of the Dordogne department to the north-west of Sarlat (66 kilometres) - in fact it is the capital (prefecture) of the department and the town has played an important role in the region for more than 2000 years.

France This Way comment: there are various historical sites and a lovely old town in Perigueux, making it one of our favourite Dordogne towns, if slightly north of the most visited parts of the department.

There are really two towns to see at Perigueux, the medieval town and the roman town, as well as an imposing cathedral. Go to the tourist office when you arrive and ask for their ‘carte touristique’ to make sure you don’t miss anything: I had been to Perigueux twice on shopping trips before realising what a beautiful medieval centre it has! 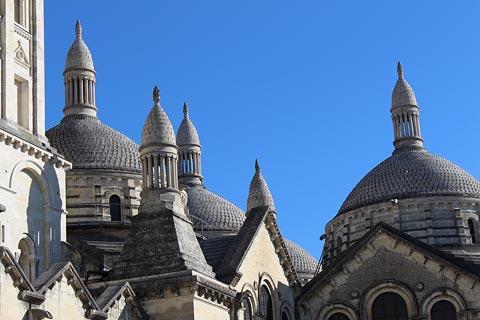 Perigueux Cathedral and the old town

Arriving in Perigueux the first thing to attract your attention is the amazing Saint Front Cathedral which dominates the town centre. The original church was built in about 1120 and changed in the 19th century by Paul Abadie who used it as a model for the design of the Sacre Coeur church in Montmarte.

Its layout is in the shape of the Greek cross, similar to St Mark’s in Venice, and above the centre and each arm a lovely domed roof (cupola) has been added. Apparently architects and locals do not like the changes and prefer the more traditional Romanesque church of St Etienne de la Cité, which used to be the cathedral of Perigueux.

For my part I think it is a beautiful building though it is very austere inside. The cathedral was classified as a Unesco World Heritage Site in 1998 as an important stage on the St James of Compostella Pilgrimage.

Rue Limogeanne is one of the best streets and has several half-timbered houses. Here you can see the Maison Estignard which is one of the best examples of the wealthy merchants houses in Perigueux. Its façade is of the first Renaissance period and uses the chateaux Blois and Chambord as its inspiration. 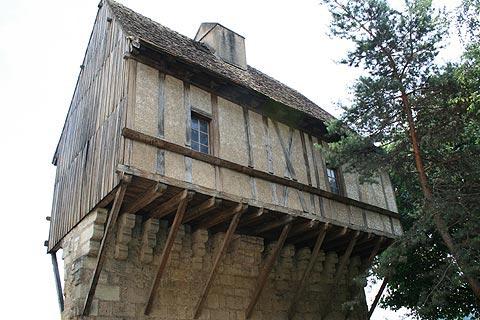 In the courtyard is a lovely doorway with a tympanum carved with the Salamander, symbol of King Francois I. Inside is a superb stone staircase. It is made of the white limestone for which the region is famous and for which this part of the Perigord is called white Perigord (Le Perigord Blanc).

At no 12 on the same street you can see the Hotel Meredieu, a lovely 15th century town house. Note: Hotel here means 'wealthy residence' rather than hotel in the modern sense.

The Rue Eguillerie (Threadneedle Street) leads to the 14th century Maison du Patissier which has a very fine 16th century door and was once the residence of a well-known patissier who made the famous Perigueux ‘Paté de foie gras’. Rue Mignot is a narrow passage which was used in the filming of ‘Jacqou Le Croquant’ a popular film in France directed by Stellio Lorenzil.

The centre of Perigueux has lots of little squares, many of which have restaurants whose tables spill into the square inviting you to stop and have lunch.

Roman Perigueux, to the west of the current town centre, is smaller than the medieval centre but is fascinating. The Vesunna Temple was built in the second century AD and the remains of the ‘cella’, the sacred part, can still be seen. Only the priest could enter the cella in order to worship the Celtic goddess ‘Tutela Vesunna’. The tower is 27metres high and 27 metres in diameter.

The Gallo Roman Vesunna Museum, designed by the internationally acclaimed architect Jean Nouvel, is a modern glass building built over the remains of a roman villa. There are two main collections in the museum: ‘town and public life’ and ‘domestic and private life’. This museum is well worth a visit.

In this part of town you can see the remains of the Barriere Castle, a 12th century castle burnt down in the wars of religion. One of the gateways of the ramparts, the Norman Gate, can also be seen. Named after invasions by the Vikings in the 9th century.

A public garden, ‘Le Jardin des Arenes’ was once the site of the Roman Ampitheatre: though only ruins remain today of the amphitheatre the gardens are nicely maintained and a pleasant place for a picnic. Close to the arena you can see the lovely Eglise Saint Etienne de la Cite. This was originally the cathedral of Perigueux. In 1577 Protestants destroyed two of its cupolas and its bell tower. 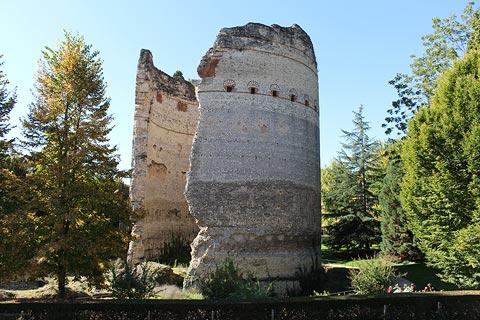 A good day to visit Perigueux is Saturday when the colourful market is held in the Place de la Clautre. This square was originally the place where executions took place in the town and is now full of colour every Wednesday and Saturday morning.

There is a tourist train in Perigueux and if you want to find out more about the history of this charming town there are guided tours available throughout the year including Torchlight tours on some nights of the year: the tourist office has details of these. For garden lovers there is even a tour of the gardens by bicycle on Tuesday mornings in the summer.

As well as the Gallo-Roman Vesunna museum there is also the Perigord Museum of Arts and Archeology, the Military Museum and the Trompe l’oeil Museum and workshop.

The best known attractions in the Dordogne including the famous caves, the Vézere Valley and the Dordogne river itself are to the south of Perigueux, but we recommend you also find time to visit the picturesque town of Brantome and the castle and village at Bourdeilles, both a little way north of Perigueux.

The popular Chateau de Hautefort is 40 kilometres east of Perigueux.

Map of Perigueux and places nearby

Visit near Perigueux with France This Way reviews

Plan your visit to Perigueux, Dordogne

Regular market(s) are held in Perigueux each Wednesday all day & Saturday all day. (Markets are held in the morning unless stated.)

The French version of this page is at Perigueux (Francais)