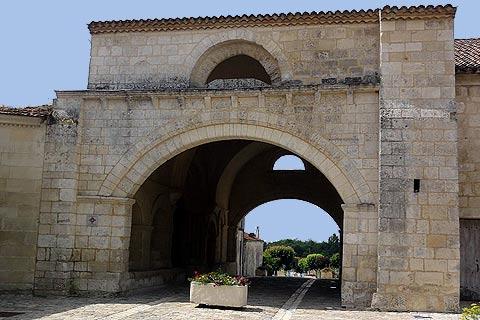 The town of Pons is situated in the countryside of the southern Charente-Maritime department and about 20 kilometres south of Saintes.

Note: the 's' in Pons is not pronounced!

The town originally developed because of its position on one of the important pilgrimage routes across France - the so-called 'Via Turonensis' that starts from Paris and follows western France before entering Spain to continue westwards to St Jacques de Compostelle.

The medieval centre of Pons is well maintained and has several buildings of interest for visitors making it one of the most popular and interesting tourist destinations in the region.

Start your visit in the central square at Pons, called the Place de la Republique and overlooked by the substantial donjon. The other highlights are in and around this square, and in the streets towards the river, and easily reached on foot. (It is perhaps unfortunate that the square is also the main car park, but it does mean that access to the town's highlights is very easy.)

The town was once an important regional centre controlled by the Lords of Pons, who established an imposing castle here. The castle and its associated ramparts and donjon (castle keep) still dominate both the town and the valley of the river Seugne below - the views from the castle walls are one of the highlights of your visit. 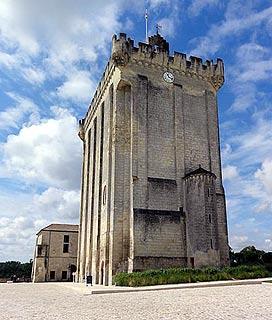 The best way to enjoy these is to first ascend the donjon itself, then to explore the public garden and follow the signposted walk around the ramparts. Not only do you have lovely views but you will also see one of the other highlights in Pons, the Grand Escalier. This 'great staircase' was built in the 17th century to give easier access to the town below the ramparts and is a very impressive achievement.

The remainder of the castle is largely a 17th century reconstruction, and is currently used as Pons town hall. Below the castle you can see the substantial arcades built into the cliff to support it, while inside you can see two ceilings decoratively painted in the 17th century.

You should also visit the small Chapel of Saint Gilles, a very ancient church although largely rebuilt in the 16th century after damage during the Wars of Religion. As well as the chapel itself and its romanesque style (12th century) entrance you can also see the original ornate entrance to the castle.

Back in the Place de la Republique you face a difficult choice - stop for a pause in one of the cafes at the end of the square or continue exploring the town...decisions, decisions!

From here you can now go down the Rue Emile Combes into the streets of the old town. Enthusisasts of romanesque architecture will be pleased to see the Church of Saint Vivien, dating from the 12th century and with a very well preserved roman style facade, most notable for its ornate entrance and the two small belltowers.

Close to here (past the roundabout with an interesting selection of statues of pilgrims) is the original pilgrims hospice. This imposing 12th century building was where the pilgrims would spend the night when passing through Pons and is now listed by UNESCO as one of the protected sites along the pilgrimage routes.

The hospice is also in the roman style, with the vaulted ceiling and arched doorway among the interesting characteristics (unfortunately the church that once formed part of the hospice no longer exists). In the hospice courtyard gardeners will be fascinated by the medieval garden, with numerous plants that were once grown for their medicinal properties.

I wondered why the hospice was outside the town fortifications. I am told this was to avoid the risk of the pilgrims bringing disease into the town - seems rather unwelcoming to me!

Over the last 10 years the town has been greatly improved and exploring the medieval streets of the town centre is very enjoyable - if you visited Pons a long time ago we would recommend you return for another visit to see how it has changed!

Enthusiasts of romanesque architecture will enjoy exploring many of the small villages near Pons where numerous small roman style churches dating from the 12th century can be seen.

After a couple of hours of medieval churches your children might just be complaining so time to head for the Chateau d'Usson. This renaissance style castle was built in the 17th century in Usson then moved to its current location stone by stone in the 19th century where it is now run as a popular local theme park called the Chateau des Enigmas, targeted at younger children and based around a treasure hunt incorporating the story of the Three Musketeers.

Map of Pons and places nearby

Visit near Pons with France This Way reviews

Plan your visit to Pons, Charente-Maritime

Regular market(s) are held in Pons each Wednesday and Saturday. (Markets are held in the morning unless stated.)

The French version of this page is at Pons (Francais)