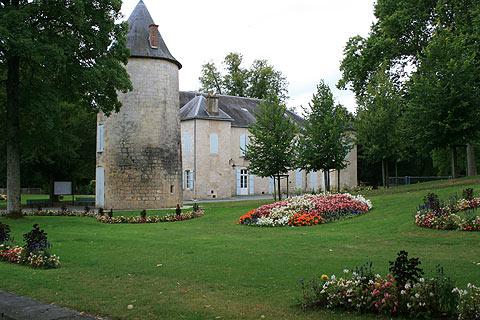 Surgeres is a quiet town on the banks of the Geres river and in the gentle countryside of the Poitou-Charentes region, to the east of La Rochelle in western France.

The town can trace its origins back to neolithic times and also to a roman settlement here, but it is the vestiges from the medieval period that are of interest to visitors today. These date largely from the time when Helene de Fonseque, maid of honour to Catherine de Medici, established her home here in Surgeres.

A quiet town a little off the tourist route, Surgeres town centre has an open central square and a couple of streets with all the usual 'small town' shops such as bakers, butchers and cafes. It is the section of the town a couple of hundred metres to the south of here that is of interest to visitors.

Enter the castle grounds through the large tower called the Porche - originally there was a drawbridge here, and was the main access to the castle. Behind the old fortified wall of the castle there is an attractive 'garden park' area, which contains several interesting historic buildings.

Highlight among these is one of the finest roman style churches in the region, dating from the 11th century and with a facade containing numerous arches and some statues. Take a look at the clocktower, an unusual design with 16 columns then pass inside the church to see the decorative capital stones and other stone engravings.

There is also a carefully planted walled garden, and a large area of more open parkland which is ideal for a picnic. Behind the castle grounds you can take a walk along the banks of the river Geres,

Map of Surgeres and places nearby

Visit near Surgeres with France This Way reviews

Plan your visit to Surgeres, Charente-Maritime

Regular market(s) are held in Surgeres each Tuesday, Thursday and Saturday. (Markets are held in the morning unless stated.)

The French version of this page is at Surgeres (Francais)