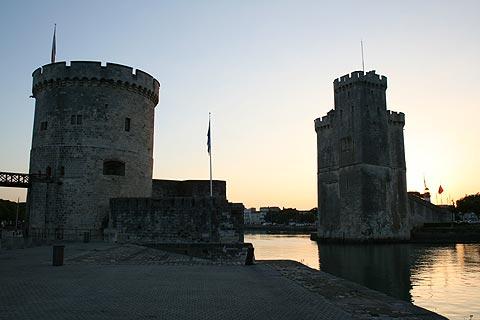 The most recognisable landmark in La Rochelle, the three historic towers stand at the entrance to the harbour, are together listed as National Monument. They once formed the most important part of the town defences against invasion from the sea.

Looking towards the sea from in the port area, from left to right you can see the Saint Nicolas Tower and the Chain Tower, each side of the harbour entrance, then along the ramparts a little way is the third tower, the Tower of the Lantern.

Exploring the towers of La Rochelle

The towers can all be visited, and apart from the interest of the towers themselves, they also each afford very good views across La Rochelle. 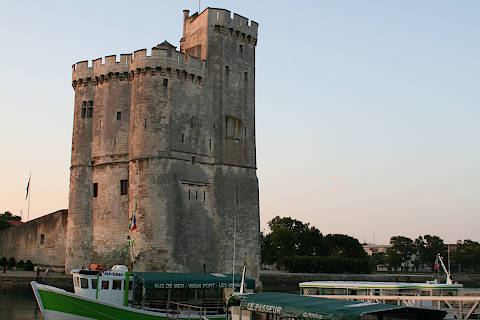 The Saint-Nicolas tower is the largest of the three. It's walls, up to six metres thick, contain a maze of stairways, passages, and rooms eg a chapel. The descent of the tower is perhaps the highlight of a visit: you can choose from the 'easy' staircase or the steep, slippery 'double helix' staircase. I highly recommend the second if possible, it is extremely impressive.

The Chain tower (Tour de la Chaine) was originally constructed to control access to the port and now contains an interesting series of exhibits covering the role of La Rochelle during the migration of French people to Canada (Nouvelle-France as it was then known) between 1604 and 1763.

Approximately 30,000 set off for Canada and 15,000 stayed (others were tradesmen who travelled under contract). The travellers included 700 young ladies, mostly orphans who were sent on the voyage by the King (hence known as "les filles du roi") as wifes for the early inhabitants.

The exhibit is fascinating and explains the challenges of the journey, and the even greater challenges of Canada when they arrived.

The third tower is the Lantern Tower (Tour de la Lanterne). The only medieval lighthouse on the Atlantic Coast that is still standing, the lantern tower contains a remarkable array of graffiti, carved into the walls by the pirates and prisoners that were held here after it was converted to a prison in the 17th century. There are several hundred examples of the graffiti to be seen, many of which are very ornate.

To see all three towers takes about 2-3 hours. a combined ticket to see all three costs 13 euros, and includes a crossing on the 'water bus' between the two opposite sides of the harbour of La Rochelle. 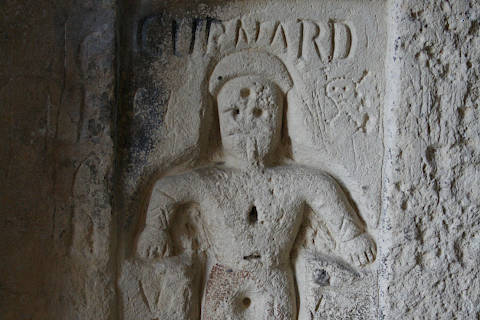 Map of La Rochelle towers and places nearby

Visit near La Rochelle towers with France This Way reviews