The Rhone-Alpes region features much of the greatest scenery in France, from the high Alps of the Savoy region to the lavender fields of the Drome and the stunning Gorges de l'Ardeche. A great outdoors destination! 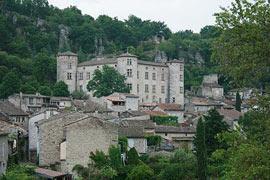 The Rhône-Alpes is a very beautiful region of eastern France, bordering Italy and Switzerland to the east, Burgundy to the north, Auvergne to the west and the Provence region to the south.

These departments are very different in character, from the high mountains in the east to the quiet villages of the Ardeche and Drome in the south, and the plains around Lyon and along the Rhone valley to the west.

Because the region is so extensive and to make your planning easier we have reviewed the principal highlights for each of these departments below - please see the travel guides for each department for lots more information and places to visit.

Savoy Alps - the Haute-Savoie department & high mountains in the east

The eastern part of the Haute-Savoie department is 'high Alps' country', including the highest mountain in France, Mont Blanc (on the border with Italy) and many other high mountains and passes.

One of the highlights is Annecy, and of course the scenic Lake Annecy and the lovely villages such as Talloires, Menthon Saint Bernard and Veyrier du Lac on the edges of the lake.

Also to visit in Savoie are the alpine towns of Chamonix, Megeve and Saint Gervais. The Olympic town of Albertville and historic centre of Conflans is also in this area, and the town of Beaufort is close to the ski-resort at Arêches-Beaufort.

Other highlights in Haute-Savoie include Lake Geneva and the towns along its southern shores. Be sure to visit Evian-les-Bains, Thonon-les-Bains and the beautiful village of Yvoire, and in the nearby mountains is the picturesque alpine village of Abondance.

Outdoor activities such as hiking, cycling, mountain climbing, skiing etc are predictably key activities throughout the region, where natural beauty is the great attraction.

The Savoie department is also well known to cycling enthusiasts because some of the most exciting stages in the Tour de France take place here each year, including the climb of Alpe d'Huez.

There is a large spa town at Aix-les-Bains, on the banks of Bourget Lake and Chambery is a favourite for visitors to this area.

The Vanoise National Parc is a scenic highlight in the mountains to the east of Savoie, while the 'beautiful village' at Bonneval is also in this part of the French Alps.

The Isere department, south-east of Lyon, includes a varied mix of environments, with higher mountains to the east including the Ecrins Natural Park.

The principal city of interest in Isere is the attractive alpine town of Grenoble, where you can also take the famous cable-car to have lovely views across the city and the surrounding Alpine mountains.

We also recommend you visit the riverside village of Pont-en-Royans with its ancient houses suspended over the river, a fascinating contrast to the busy town of Grenoble, and the historic centre of Cremieu to the west of Isere.

The Isere department is also an important Alpine destination for skiing enthusiasts with the Deux Alpes and the Alpe-d'Huez ski-stations within the borders of the Ecrins National park and Les-7-Laux further north.

Drome and the south

Bordering Provence, the Drome region of the rhone-Alpes is best known for its lavender fields and quiet market towns.

The principal natural highlights in Drome fall within the Vercors Natural Regional Park and the villages and lavender fields of the Drome-Provencal region, and it is these areas that attract the most visitors to the region.

The principal towns in Drome follow the Valley of the Rhone. These each have their own points of interest and include Vienne, Romans-sur-Isere, Montelimar, Nyons and Valence. We also suggest you visit the nearby town of Tain l'Hermitage, best known for its gourmet products, and the town of Crest.

Among the most picturesque villages in this part of the Rhone-Alpes are Le Poet-Laval, La Garde-Adhemar and Mirmande - all three of these are medieval villages not far from Montelimar and listed among the 'most beautiful villages in France'

Among the most visited historic landmarks in the Drome are the Chateau de Grignan, the Chateau de Suze-la-Rousse, and the extraordinary monument of the Palais Idéal built by the postman Cheval at Hauterives in the north of the Drome department.

Note that the department is named after the river of the same name but is NOT the region referred to as the Loire Valley which is in the Centre region, a long way north-east of here!

The Loire department, little known but with an exceptional charm has a wide variety of scenery and a large number of medieval and cultural sites to visit:

Villages to visit in the Loire include Pelussin and Malleval, and in the south of the department we suggest you visit Sainte-Croix-en-Jarez, one of the 'most beautiful villages of France'.

In the north-west Rhone-Alpes, the Rhone department is one of the least visited in the region.

The principal town in the Rhone department, and one of the most interesting cities in France to visit, is Lyon. The highlight in the city is the historic centre around the Presqu'ile de Lyon but there is a great deal to enjoy throughout the city centre.

In the north-west of the region around Villefranche-sur-Saone you can explore the beaujolais wine region around the pretty villages of Bagnols and Oingt, at 20 km from Lyon. Also close to here we suggest you explore Anse, Trevoux and Theize.

For an interesting contrast, the monastery at Eveux is an example of modern architecture designed by Le Corbusier.

The Ain department is the most northerly department in the Rhone-Alpes, extending from Lake Geneva in the east and almost as far as Lyon to the west.

The department capital is Bourg-en-Bresse while nearby you can explore pretty villages such as Coligny, Verjon, Pressiat, Cuisiat, Treffort and Meillonnas, each with their own character.

On the border with Switzerland and close to the Jura mountains visit the spa town at Divonne-les-Bains, or head further south in the Ain department to visit Belley and the Pays de Bugey.

The pretty medieval town of Perouges is a 'most beautiful village' in the department, and one of our personal favourite villages in France.

Among the natural highlights of this region are the Dombes plateau and lakes to the north of Trévoux and Pérouges and ideal for bird-watching.

The Ardeche, to the south-west of the Rhone-Alpes, has several highlights and places of great natural beauty and is a spectacular 'outdoor' destination.

Start perhaps with the Gorges de l'Ardeche - amazingly beautiful, about 40km of deep gorges with the Ardeche river at the bottom and best accessed from Vallon Pont d'Arc (not to be confused with Pont d'Arc itself, the stone arch at the entrance to the gorges).

Another sight not to be missed in the Ardeche is the Bois de Paiolive near Les Vans, where olive trees are interspersed with large, curiously shaped rock formations, and the nearby villages of Chambonas, Naves and Banne (see below).

The 'capital' of the Ardeche is Privas, also in a fine setting, while the cathedral town at Viviers has quite an extensive old town and the classified 'most beautiful village' of Balazuc is on a cliff on the banks of the Ardeche River.

Ski resorts in the Rhone-Alps

Skiing is a major attraction to the region which includes much of the best skiing in France - and is also the most popular region with those who visit every year.

Many of the smaller resorts are combined into 'ski domains' that give combined access to a very wide range of facilities and ski opportunities, both on and off piste. Some of the best known ski resorts and domains in the Rhone-Alps include:

Map of Rhone-Alpes and places nearby

France This Way feature articles set in the Rhone-Alps