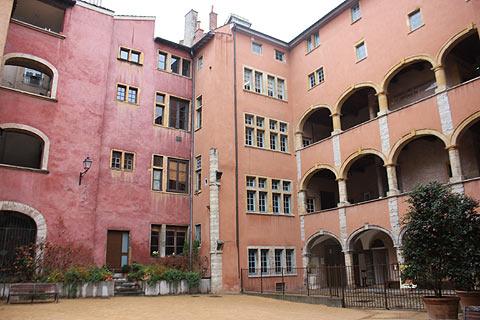 Lyon old town is situated across the Saone River from the Presqu'ile district at the heart of Lyon's beautiful and thriving centre.

The old town, known as Vieux Lyon, was not so long ago condemned as 'unliveable' and was the proposed site of a major road. Happily this idea was scrapped, the buildings of 'Old Lyon' cleaned and restored and their glory revealed and it is now one of the most animated parts of the city. It is also one of the largest Renaissance neighbourhoods in Europe.

Once the beauty of the area was revealed it was to be proposed as a UNESCO World Heritage site but, though beautiful and interesting, it is not unique and so Lyon as an ensemble was proposed instead as it offers 2000 years of history, from the Roman Forums to the Renaissance architecture of the old town, to the 18th and 19th century buildings of the Croix-Rousse area and on to the elegant 19th century buildings of the Presqu'ile. 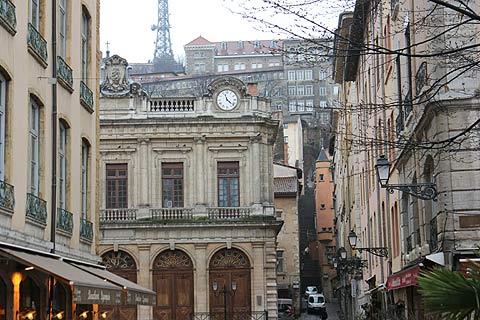 The 16th century was a time of thriving business for Lyon. Lyon was on the crossroads of trade between Italy, Spain, Holland and France and the area now known as 'Vieux Lyon' grew up to accommodate the thriving business population.

Houses were built on four or five floors with interior courtyards and lovely staircases and galeries, many of which show the influence of the Italian's (who were such key trading partners at the time). However the dominant style was the French gothic style predominant at the time.

Some buildings such as the Maison du Consul Claude de Bourg (14 rue Lainerie) and the Hotel Gadagne on the Place du Petit College are an interesting mix of the two.

The Maison du Consul is a very elaborate flamboyant gothic building with Italian influences and the Hotel Gadagne is now a museum allowing you to see some of the fine interior details such as its stone staircase and painted ceilings, and for a modern touch - a roof garden! There are two museums, one exhibiting items relating to the history of Lyon, and one of puppets from around the world.

These two buildings are in the northern part of 'Vieux Lyon' known as the 'Quartier Saint Paul'. Also in this part is the rue Juiverie which has lots of buildings with courtyards, many of which are open to be seen in the morning.

A little further south the Saint Jean quarter is the heart of 'Vieux Lyon'. Here is the St-Jean Cathedral, a fine example of Gothic architecture. The Manecanterie adjoining the cathedral is one of the oldest buildings of Lyon and is home to Cathedral's treasury.

Also in this area is one of the highlights of Vieux Lyon - the 'tour Rose' which is a beautiful pink tower which sticks up from the Maison du Crible on rue du Boeuf.  At the base of the tower is a passage you can walk through. This is one of the famous 'traboules' which are in this area.

Traboules are corridors through buildings and courtyards taking you from one street to the other and are a particularly distinctive feature of 'old Lyon'. There are several traboules in this area.

The museum of Miniatures and Cinema is in this area on Rue Sant-Jean. 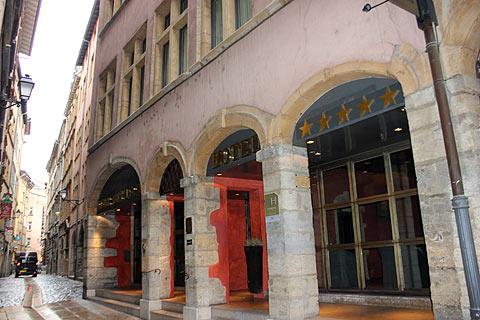 The Quartier of Saint Georges, south of the Saint Jean Quartier, also has some traboules and courtyards to admire and leads down to the church of Saint Georges. This area was the original silk-weaving area of Lyon before the silk weavers moved to the Croix Rousse area in the 19th century.

While in Lyon you will also want to explore the Presqu'Ile de Lyon.

Map of Lyon Old Town and places nearby

Visit near Lyon Old Town with France This Way reviews