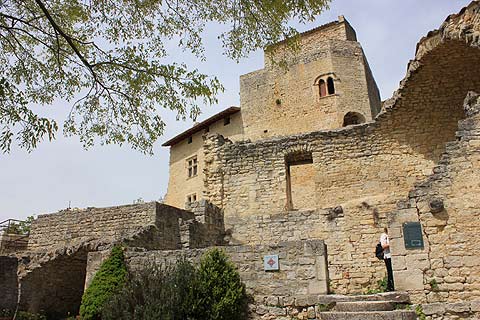 Listed among the 'most beautiful villages in France, Le Poet-Laval is situated in the Drome department (Rhone-Alps region) about 20 kilometres to the east of Montelimar.

France This Way comment: running down the side of a hill and surrounded by woodlands and the lavender fields that are typical of the region, Le Poet-Laval is a very picturesque small village in a scenic setting and we recommend you visit when you are in the vicinity. 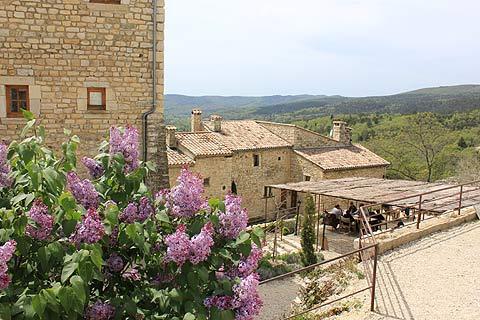 Cars are not allowed to enter le Poet-Laval (and in any case would be impractical on the beautifully preserved steep narrow streets), so you will need to park just below the village and explore on foot.

During your visit you will pass along the streets through the cluster of houses that constitutes the village to reach the medieval castle and remains of the church above le Poet-Laval: these are the main monuments of importance and around which the medieval village originally developed.

The village has many small features of interest that you will discover as you explore, such as small terraces with far-reaching views, ancient wells and many picturesque old buildings, and parts of the original defensive walls. Many of the houses date back to the 16th century, a time of prosperity for Le Poet Laval.

The defensive walls were built in the 14th century and had two main doorways through them, one on the south side and one on the west. On the south side the ramparts were flanked by two semi-circular towers and a narrow passage ran along the top with access from the houses within the defenses.

The substantial castle donjon (the remainder of the castle was destroyed at the time of the revolution) and the roman style chapel were built in the 12th century by the Hospitaliers, both for defensive military reasons and also as a resting place for pilgrims.

The ornate window in the donjon was added in the 15th century. it was also about this time that the Salon des Commandeurs' was constructed against the ramparts as an addition to the castle.

You can also visit the Museum of Dauphinois Protestantism in the temple in Le Poet-Laval (one of the few early protestant temples that survived the 'revocation of the Edict of Nantes' which removed protestant rights in France) that has artefacts looking at the historic persecution of protestants in the region.

The temple probably started life as a residence of one of the knights Hospitalier and then in the 15th century became the village hall before being converted into a protestant temple in 1622.

Internally only the galleries retain their 14th century appearance. The central pulpit and pews which form a circle were added in 1860. The temple is a rare example of Protestant church dating from before the 19th century. As well as being a museum it is occasionally still used as a church. 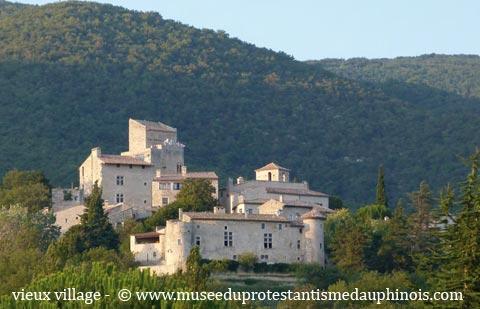 The region around Le Poet-Laval is often visited for the lavender fields and scenery, while the Provencal Drome region and the village of Vaison-la-Romaine are to the south and some of the picturesque Ardeche villages such as Vogue and Saint-Montan are a short distance to the west.

Map of Le Poet-Laval and places nearby

Visit near Le Poet-Laval with France This Way reviews