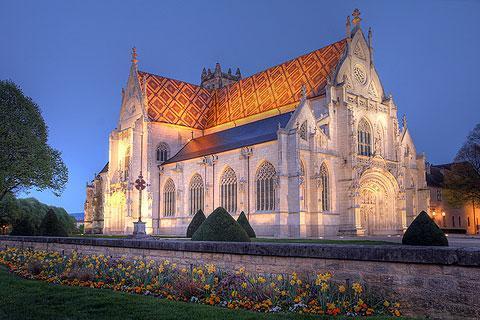 The town of Bourg-en-Bresse is 60 kilometres to the north of Lyon in the Ain department of the Rhone-Alpes.

It is the churches that are the main attraction - both the church of Notre Dame in Bourg-en-Bresse itself and the important church-monastery at Brou, which is now a suburb of the town, but be sure to also allow time to explore the old centre of the town while you are here.

France This Way comment: the town is quite sizable and has a wide range of cafes and shops in a bustling town centre, with many other places of interest of note to discover as you explore, so allow plenty of time to soak up the atmosphere and relax in lively surroundings. 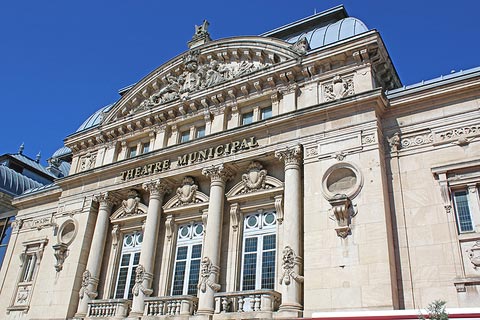 Start your visit by entering the old town through the Porte des Jacobins. Bourg-en-Bresse is centred around the pretty Place de l'Hotel de Ville, and the surrounding (largely pedestrianised) streets, and you will see some attractive 16th-18th century houses, several in colombage such as the 15th century Maison Hugon and the Maison Gorrevod on Rue du Palais, among others.

There are also some notable townhouses from the 18th century such as the Hotel Marron de Meillonnas (built 1774) - admire the facade with its intricate Louis XV balconies and stonework then pass through the entrance to see the interior courtyard. The Town Hall has also taken its style from a typical Greek temple.

In the 17th century hospital (Hotel-Dieu) there is an extensive apothecary with many items related to medicine collected over the centuries, while the theatre in Bourg-en-Bresse is another building with a notable facade.

Brou church, built in the 16th century,  has a fine, decorated facade and decoratively coloured roof tiles while inside there are several stunning works of art: in particular you will want to see the marble effigies in the mausoleums. Apart from the fine gothic decoration - some of the finest to be found in France - the cloisters are also very impressive (there are three separate cloisters here).

The Royal Monastery of Brou is a National Monument. The Museum of Brou is also on the site and includes some interesting paintings among its collection: most of the artworks are from the 16th-17th century. 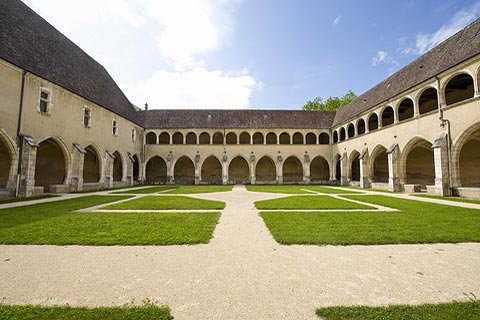 Cathedral of Notre-Dame of the Annonciation

The cathedral dominates the centre of Bourg-en-Bresse, with a four sided tower supporting an eight sided tower which in turn supports a dome.

With the earliest parts of the cathedral dating from the 16th century it combines elements of the original gothic church with more recent renaissance elements such as the main facade. Inside the cathedral it is the stained glass windows and the intricately carved wooden stalls and misericordes that are of particular interest.

Another large religious monument in Bourg-en-Bresse is the Basilica of Sacre-Coeur, but this was built in the early 20th century and is less interesting to visitors. 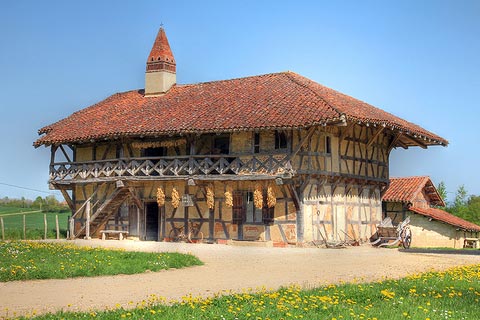 Close by you can also enjoy the substantial Bouvent leisure park, perhaps following the path that leads around the edge of the lake, or take a stroll in the Seillon Forest.

There is a 16th century farm at Courtes near Bourg-en-Bresse that is now open as the 'farm museum of the forest'.

Map of Bourg-en-Bresse and places nearby

Visit near Bourg-en-Bresse with France This Way reviews

Bourg-en-Bresse is classified as a

Plan your visit to Bourg-en-Bresse, Ain

Regular market(s) are held in Bourg-en-Bresse each Wednesday & Sunday & Saturday. (Markets are held in the morning unless stated.)