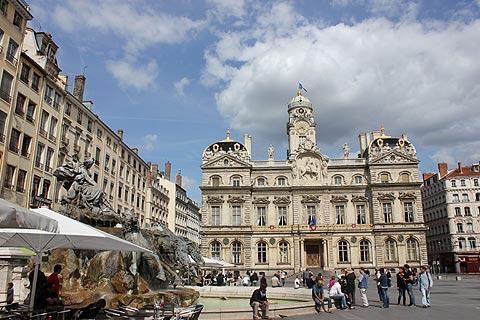 Many of Lyon's historic buildings can be found in Lyon's Presqu'ile region. This is the area between the Rhone river and the Saone river and makes up the 2nd, 1st and 4th arrondissement.

The Presqu'ile district of Lyon

Wandering through this very attractive area the buildings are generally beautiful and often painted in pale pastel colours with beautiful ornate balconies. Most of them are shops and restaurants making this area fantastic for shopping and eating. During the day time the area between Place Bellacour  and Place des Terraux is wonderful for shopping, with all the big names and lots of interesting boutiques and designer shops. 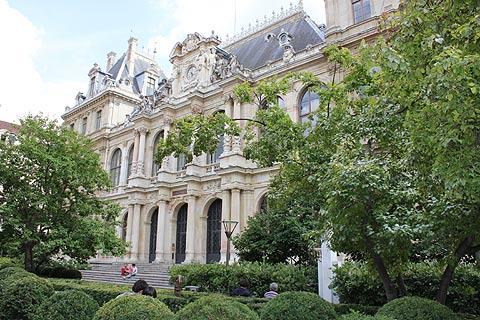 The Rue de la Republique is the main shopping street in Lyon. Its buildings are 19th century Haussman style - long straight boulevards filled with shops and restaurants. You are never far from one of the two rivers adding to the overall beauty of this area.

This area is part of Lyon's UNESCO World Heritage Site.

The highlights of this area stretch from Place des Terreaux in the north to the Place Bellecour in the South. The place des Terreax, once the site of the town guillotine and put into regular use in Lyon during the French Revolution, is dominated on the south side by the fabulous Musee des Beaux Arts de Lyon. Opposite is a row of cafes and restaurants and the Fountain de Bartholdi. On the east side of the Place you can admire the Hotel de Ville of Lyon.

The Lyon Musee des Beaux Arts is one of the finest in France and has works by Picasso, Matisse, Degas, Van Gogh and many more. The museum is housed in a former 17th century convent and has a peaceful courtyard that you can go and sit in even if you are not visiting the museum. The building is also known as the Palace of Saint Pierre.

The Fountain Bartholdi was originally the result of a competition to design a fountain for the Place des Quinconces in Bordeaux. Frederic Bartholdi won the competition but his design was not realised until many years later after the success of his 'Statue of Liberty' in New York.

The Fontaine Bartholdi was exhibited at the Paris Exhibition in 1889 and seen by the mayor of Lyon who wanted it for his city. Bartholdi came to Lyon and agreed the Place des Terreaux as a suitable site for his fountain. The fountain has a woman and child on a chariot to symbolise France. She is surrounded by France's four greatest rivers symbolised by four horses.

Near to the Place des Terreaux is the Opera building. Lyon's Opera House, the Opera Nouvel is named after Jean Nouvel, one of France's leading architects who redesigned the building between 1985 and 1993. It is built within the original building by digging down and also adding a huge steel and glass barrel-shaped roof adding lots of extra space. Only the facade and the foyer remain of the original building.

Walking south see the Eglise St Nizier which is Gothic in style but has a Renaissance Portal. Nearby the 14th century Eglise Saint Bonaventure was once part of the Convent of the Cordeliers. Also nearby is the Palais du Commerce, also known as the Palais de la Bourse, built in 1860 and one of Lyon's more imposing buildings.

The Place des Jacobins is at the centre of the 2nd arrondissement and no less than 12 roads meet at the square which has a large fountain at its centre. The nearby Theatre des Celestins was built in 1877 in an Italien style and is named after the Celestine monastery which occupied the site before the theatre. Designed by Gaspard André it opened in 1877 but then burnt down three years later. André was put in charge of its rebuilding and In 2002-2005 the theatre underwent major renovations and is now a fabulous place to watch a wide range of theatre. 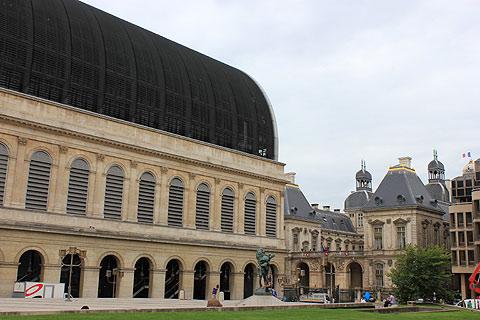 On  the Rhone river bank you can see the Hotel Dieu Hospital which was built in the 12th century and renovated in the 17th during Lyon's period of great prosperity due to its booming silk industry. You can visit the hospital and see examples of surgical instruments and pharmacy items from the past as well as three hospital wards from a past era.

South of here is the Place Bellecour which is the largest pedestrian square in Europe. It is huge and surrounded by fine 19th century buildings. In the centre is a statue of Louis XIV on a horse. Place Bellecour has an ice skating rink on it in the winter and also a 'big wheel' is installed every winter. Every Friday night at 20h30 Place Bellecour is the starting point of Lyon's roller blade ride (similar to that which takes place in Paris).

South of Place Bellecour in the Ainay district is the Basilique de Saint Martin d'Ainay. This is one of the few Romanesque style Basilicas in Lyon, and built on the site of a much bigger church which was possibly where the martyr's basilica once stood.

In the 2nd century a group of Christians, including a young girl, were fed to the lions in one of Lyon's amphitheatres, however the lions refused to eat her. But the Romans martyred her anyway along with the others. Their bodies were burnt and thrown in the river where they were washed downstream. They were collected and secretly buried under the alter of a large basilica. This may be this basilica but it is also possible it is Saint-Nizier or the Cathedrale St Jean on the other side of the Saone river.

Shopping on the Presqu'ile of Lyon

The Presqu'ile area of Lyon boasts over 3000 shops. In the area called the Carre d'Or between Place Bellecour and Cordeliers there are more than 70 different designer and well-known stores. Designer stores are particularly centered around Rue Edouard Herriot. Between rue Victor Hugo and rue de la Republique is one of the biggest pedestrian shopping areas in Europe.

Not far away near the Part Dieu train station is the Part Dieu shopping mall which is the biggest in Europe. This is on the left bank of the Rhone river and as well as shops has a huge cinema and lots of restaurants and cafés. - so if you like shopping Lyon is the city for you!

Head south of Place Bellecour to the Auguste Comte district and you will find loads of shops dedicated to antiques and products for the home. 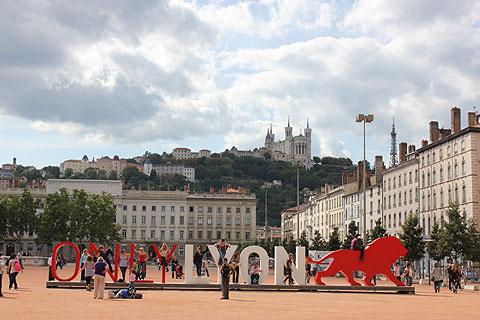 Museums on the Presqu'ile of Lyon

The Musée des Beaux Arts is one of the biggest Art Museums in Europe. It is located in a 17th century building on one of Lyon's nicest squares, The Place Terreaux. Its permanent collections include a fabulous Egyptian section,  some great ceramics and furniture and paintings including those by Claude Monet, Francis Bacon, Paul Gauguin and Pablo Picasso amongst many others.

The Musée de l'Imprimerie is housed in a fine Renaissance building and has exhibitions outlining the history of books and graphic techniques.

The Musée des Tissus et des Arts Decoratifs. Lyon became rich in the 17th century because of its thriving silk industry. Lyon's silk is given pride of place in the Musée des Tissus' collections but there are also beautiful collections of materials from around the world and through the ages. The decorative art museum has fine ceramics and clocks and much more.

Another area of the city you will want to explore is Lyon old town.

Map of Lyon Presqu'ile and places nearby

Visit near Lyon Presqu'ile with France This Way reviews

The French version of this page is at Lyon Presqu'ile (Francais)