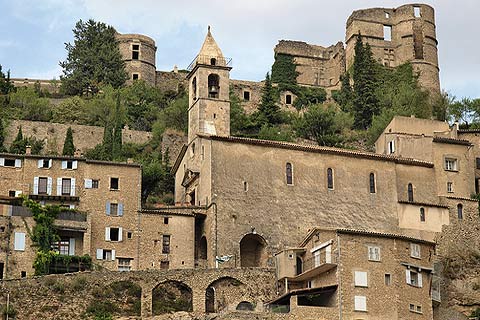 Montbrun-les-Bains is a picturesque village and spa centre spread out across a hillside above a valley of lavender and opposite Mont Ventoux. It is in the Drome department of south-east France in the region described as Drome-Provencal, and now classified as one of the 'most beautiful villages in France'.

Note: this article refers to Montbrun-les-Bains in the Rhone-Alpes not Montbrun in the Gorges du Tarn.

The historic centre of Montbrun-les-Bains is best accessed through Porte du Beffroi, one of two of the original gateways that pass through the town walls (the other is near the church). Originally the town had four of these entrances. 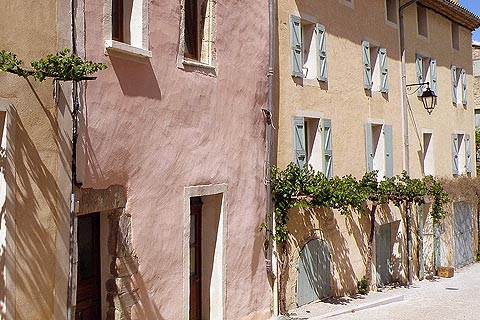 The 13th century belfry that gives the gate its name is topped by a small campanile and once formed part of the defences of the village. You can also see one of the most impressive of the 16 fountains of the village here in Place du Beffroi: the fountain originally had pride of place in the centre of the square but is now in one corner.

Strolling along the narrow, often cobbled, streets of this exceptionally characterful village you pass numerous traditional stone houses, often very tall and squeezed together to make the most of the limited space available, through ancient vaulted passageways and up steep staircases, and passed small stone fountains. Flower displays along the way bring a splash of colour to the centre

On the way through Montbrun-les-Bains you will also see the 14th century church (significantly modified in the 17th century) which contains some medieval frescoes and an impressive altarpiece.

Eventually you reach the ruins of the medieval castle that stands above the village. Although the castle itself is not open to the public, you can see enough ruins to appreciate the importance that the castle once had. The original medieval castle was largely destroyed in the 16th century, and a renaissance style castle built here - this also fell to abandon after the revolution.

The thermal waters here have been recognised since roman times, although it was only in the 19th century that they were developed as a commercial enterprise, and still many visitors come to Montbrun-les-Bains to enjoy a treatment at the spa. The spa centre is on the edge of the village and called Valvital. It is open end march to end November - see details of treatments and other options at Valvital Montbrun. 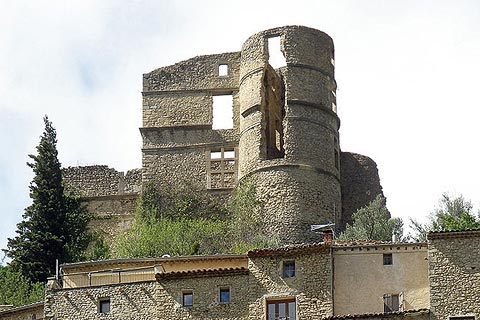 Attractions and activities nearby

The lavender fields of the region are one of the big attractions, especially scenic during the flowering season (end-June - July), and there are many walks in the region that enable you to make the most of the scenery.

You will also discover numerous picturesque small villages close to Montbrun-les-Bains. Among our personal favourites are Brantes, Aurel, Rochette du Buis, Reilhanette and Banon but you will find many others we haven't yet discovered.

Cyclists will want to follow the route of one of the most popular Tour de France mountain routes and make the ascent of Mont Ventoux.

Map of Montbrun-les-Bains and places nearby

Visit near Montbrun-les-Bains with France This Way reviews

Plan your visit to Montbrun-les-Bains, Drome