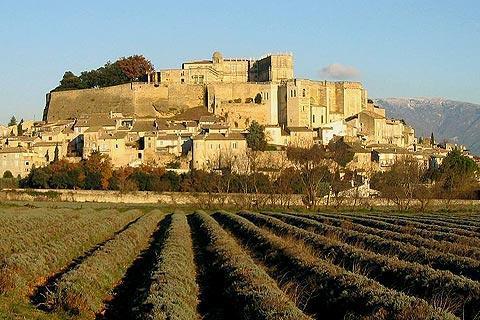 The Drome department includes the scenic attractions of the gorges and forested slopes of the Vercors Regional Natural Park to the north, and the lavender fields, olive trees and perched villages in the Provencal Drome region to the south - all you have to do is choose between them!

The Drôme department is situated in the southern Rhone-Alpes region of south-east France, with the Ardeche to the west and Provence to the south.

For visitors the department can be considered as several different regions with their own characteristics. From north to south these are:

Below we look at the highlights of each of these regions:

This is the least visited region of Drome, and consists of a large area of quite flat plains around Valence and slightly more undulating hills and rolling farmland further north.

One of the most popular and unusual attractions in the Drome is found to the north of this area, at the Palais Ideal at Hauterives. The Palais Ideal is a very ornate building built over the course of 30 years by the village postman and that combines elements of temples, statues and fantastic figures - and much more!

The town of Valence is pleasant to explore with several interesting historic buildings, a rather famous music kiosk (!) and a lively town centre which is now officially classified as a 'town of art and history'.

Another town of interest just north of Valence is Romans-sur-Isere, with an important abbatial church and some medieval and renaissance houses to admire. The town of Tain l'Hermitage is well known becase it is at the centre of the vineyards where the Cotes-du-Rhone wines called Hermitage and Crozes Hermitage are produced, and there are many places to sample the local wines.

The Vercors Regional Natural Park falls within the Drome department and also the neighbouring Isere department, on the raised area of hills and mountains called the Massif de Vercors, between the Diois Valley to the south and the Isere Valley to the north.

The landscape is one of low mountains, often called the pre-Alps because it is the lower altitude western limit of the Alps. The parc has many beautiful natural highlights, with deep gorges, forested hills and ridges of cliffs and the Vercors Park becomes more dramatic the further east you travel.

The region was also a major centre for resistance activity during the Second World War, a history commemorated most notably at the village of Vassieux-en-Vercors (south of Pont-en-Royans) with its Memorial to the Resistance and cemetery.

The nature and isolation of the region mean there are no major towns here, but although outdoor sports and activities are the principal attraction for visitors you will also discover small villages in beautiful locations, such as Saint-Julien-de-Vercors.

This central region of the Drome department includes the towns of Crest and Die.

The town of Crest is dominated by its medieval donjon said to be the highest in France, and also has a pleasant historic centre to explore with lots of steep streets and interesting churches and houses to see.

One of our favourite places in this region is the village of Mirmande, to the west of Crest and a lovely traditional village of cobbled streets and small stone houses which is also on a raised plateau so has far-reaching views across the region. Mirmande is now classified as one of the 'most beautiful villages in France'.

A very short distance north of Mirmande we also enjoyed a stroll around the perched village of Cliousclat. In fact you will discover lots of other attractive villages all across the Diois region from the east to the west of the Drome department with Pontaix, Chatillon-en-Diois, Saillans, Montclar, Bourdeaux and Autichamp just some of the most visited.

The Drome-Provencale region is so called because of the characteristics it shares with the neighbouring region of Provence. You will find small traditional villages, quiet roads and fields of lavender, olive trees and gentle landscapes - ideal for exploring by bike if possible but a car will do just as well!

The most important towns in the region include Montelimar (to the west and very famous for its nougat) and Nyons.

While these towns are pleasant, for us it is the villages and scenery that are the highlight of the Drome-Provencale. In the south of the department there are three villages that are listed among the 'most beautiful villages in France: La Garde-Adhemar and Le Poet-Laval to the south-west and Montbrun-les-Bains to the south-east.

While these are certainly among the most attractive villages in the region, you will discover numerous others with steep cobbled streets, ancient houses and far-reaching views as you explore, such as Sainte-Jalle and Sainte-Euphemie to the south-east, Chamaret and Clansayes to the south-west, Sauzet and Roussas to the west...

As well as the quiet countryside you will also find some of the most popular visitor attractions in the Drome department here, such as the Chateau de Grignan, the Chateau de Suze-la-Rousse and the crocodile farm at Pierrelatte - see Drome-Provencale guide for details.

Note: the area around Valréas is most unusual in that it is officially part of the Vaucluse department of Provence to the south, but is entirely encircled by the Drôme department. A curious historical anomaly and the only place where this happens in the whole of France.

Map of Drome and places nearby