The interesting and picturesque town of Vaison-la-Romaine is situated 30km north-east of Orange, in the Vaucluse department of Provence. The town has a long and colourful history, stretching back before the Roman conquest of France 2000 years ago (hence the name of the town). Vaison-la-Romain is labelled as one of the 100 best detours in France.

A visit falls into two parts - the roman ruins and the medieval 'upper town'.

There are still significant roman remains to be seen in the town, especially those of the roman baths and theatre, and the town is said to be the largest archaeological site in Europe.The Roman remains cover 15 hectares, eight of which are visitable.

The Puymin site and the tourist office are both just behind the main square in Vaison-la-Romaine. Centred around the Puymin area, the excavations have also uncovered significant remains of luxurious roman houses, with mosaics demonstrating that this was once a very wealthy settlement. Indeed this is part of a Roman city with a shopping district, paved streets and an irrigation system, the "Nymphée". 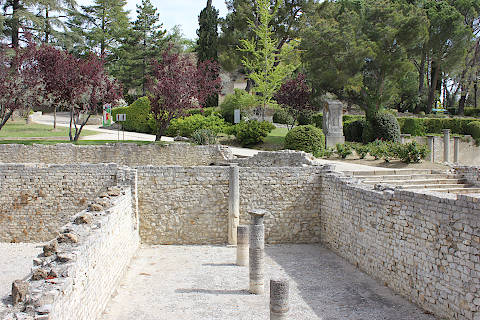 See also the "Sanctuaire à Portiques" with a large garden, The "Apollon Lauré house" which is thought to have belonged to the Messii family. This house has a dining room, kitchen, baths and toilets. The "Maison à la Tonnelle" is built on three levels.

The whole site is in a lovely park which winds gently uphill leading to the museum, the Theo Desplans Archeological Museum,  and Roman theatre. The colourful history of Vaison-la-Romaine can be followed in the Puymin museum, which most notably contains imposing marble statues of three of the Roman emperors. Another highlight is the wonderful mosaic from the Villa du Paon (peacock).

The large Roman theatre once sat 6000 people on its stone terraces. During the summer it still plays host to various artistic events as part of a summer festival.

On the other side of the tourist information office is the Villasse Roman Site. Here there is a shopping street with large columns, a public baths and large "domus", large villas which must have belonged to the wealthier citizens of Vaison-la-Romaine.

The "Maison du Buste en Argent", House of the silver bust, is over 5000 square meters in size and has a succession of rooms leading from one to another and out to their courtyards and gardens. The large silver bust after which the house was named can be seen in the museum.

As well as the Roman sites of Vaison the main part of the modern town also lies on this side of the river. (In the 19th century the population moved from the old town to the lower town and this modern town is focussed around the Place Montfort and La Grand Rue).

The Place Montfort is the main square and has plenty of bars and cafés at which to relax after your explorations. Apparently more Roman remains sit underneath this square. Also to see on this side of the river is the Notre-Dame de Nazareth cathedral and cloister, dating back in part to the 13th century -  another highlight of Vaison-la-Romaine. Near to the cathedral is the Saint Quenin chapel whose 8th century apse is the oldest in Europe.

After exploring the Roman ruins head for the old town. Residents of Vaison-la-Romaine moved uphill in the second half of the 12th century following a spate of pillaging ordered by the Count of Toulouse. He was disgruntled with the bishop and disputing their respective possessions. On the hill residents could better protect themselves.

The old town was largely built up over the 16th and 17th century and has a double defensive wall. The ruins of the castle, built by the Counts of Toulouse and dating from 1195, perch at the top of the rock above the village itself. The castle began life as a wooden tower in the 12th century and was rebuilt in the 13th century.

This part of Vaison-la-Romaine is very attractive, with lots of narrow steep streets winding up the hill past medieval houses, through vaulted passages that lead to small squares with 18th century fountains.

On your way you see numerous small architectural highlights such as ornate doorways and carved stone windows. There is an attractive belfry and from in front of the church you can get splendid views of the river below.

There is a wide selection of cafes and small shops, and lovely views from the higher parts of the village due to the raised hilltop position of medieval Vaison-la-Romaine. 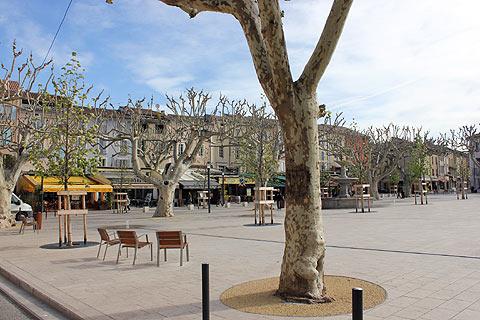 On the edge of town is the 'Garden of the 9 Maidens'. This garden contains 81 granite blocks engraved with texts in 9 languages. It was created following the devestating flash flood in 1992 which swept away riverside houses and an industrial area and killed more than 30 people. The contemporary granite installations are in a lovely park with children's playgrounds and it is an excellent picnic spot.

Although the area around Vaison-la-Romaine is less visited than some parts of Provence you will find interesting towns and villages such as Seguret and the beautiful scenery of the Dentelles de Montmirail at close proximity.

Map of Vaison-la-Romaine and places nearby

Visit near Vaison-la-Romaine with France This Way reviews

Plan your visit to Vaison-la-Romaine, Vaucluse

Regular market(s) are held in Vaison-la-Romaine each Tuesday. (Markets are held in the morning unless stated.)