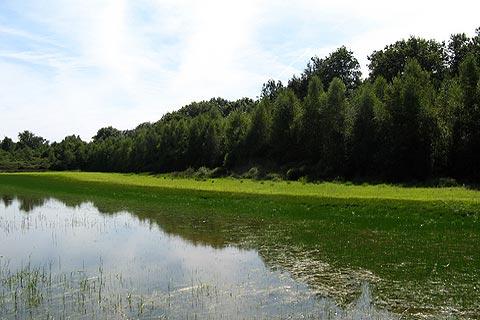 The Dombes is a plateau in the Ain department (Rhone-Alpes region) north-east of Lyon and south-west of Bourg-en-Bresse, centred around Villars-les-Dombes, Chatillon-sur-Chalaronne and Marlieux.

At around 300 metres above sea level the Dombes plateau is an extensive flat area (more than 500 square kilometres) that is covered with small lakes and villages and a good number of historical monuments and castles - a unique environment in France.

The region is especially renowned as a bird-watching and fishing region - there is an enormous diversity of birdlife to be seen and apparently more than 130 species of bird nest here. The more than 1000 lakes here are man made, dug for the large part by monks wishing to use the clay (the French word étang better describes the environment than lake, because it describes small man-made lakes). 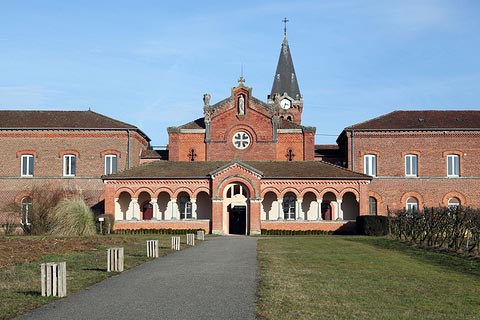 The Ain tourist department propose several different routes to follow when exploring that start either from Chatillon-sur Chalaronne (the north and west circuits) or Villars-les-Dombes if you are exploring the southern part of the region.

You can see full details of the suggested routes by visiting Ain Tourist Routes and selecting North Circuit, South Circuit or West Circuit at the top of the map. Many of the towns and villages along the suggested routes are also starting points for walks and nature trails in the surounding countryside, have unique monuments to visit, or feature birdwatching facilities nearby.

The 'west circuit' is the shortest at 60 kilometres so is also ideal as a bike route, and the other two are around 100 kilometres long.

Note that the Dombes plateau can have 'unpredictable' weather, and rain, fog and low-lying cloud are not unknown.

The most important town within the Dombes region is the historical town of Chatillon-sur-Chalaronne, although many of the other smaller towns and villages will also capture your attention.

The main towns to visit on the edge of the Dombes region are Lyon itself, which reaches as far as the south-western limit of the Dombes plateau, also Trevoux and the very picturesque village at Perouges (one of our favourite villages in France) to the east, and Bourg-en-Bresse to the north.

The bird park at Villars-sur-Dombes is a great introduction to the birdlife of the region for both adults and children alike.

The 15th century frescoes in the Chapel Notre-Dame de Beaumont at La Chapelle-du-Chatelard are one of the most interesting historical sights in the region. 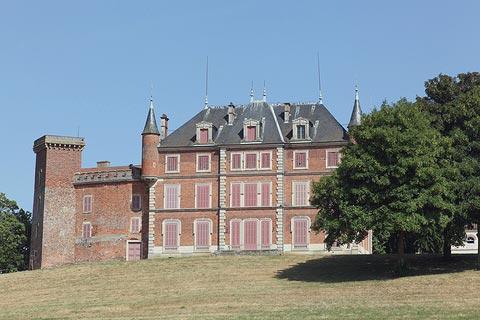 Note: photos above show one of the many lakes in the Dombes; the Abbey of Notre-Dame-des-Dombes at Plantay, and Tavernost Castle.

Map of Dombes and places nearby

Visit near Dombes with France This Way reviews

Plan your visit to Dombes, Ain

Regular market(s) are held in Dombes each Tuesday. (Markets are held in the morning unless stated.)

The French version of this page is at Dombes (Francais)